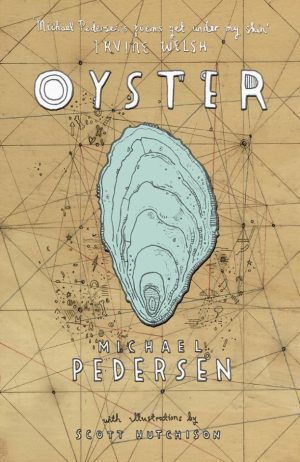 This is the second poetry collection from Michael Pedersen, following 2013’s deservedly well-received Play With Me. Pedersen is well known as a co-founder of the Neu! Reekie! collective, which organizes nights of poetry, music and, if this collection is anything to go by, debauchery. Indeed, the poet’s preoccupation with hedonism – sex, drugs and alcohol all feature – puts you in mind of the Beat poets. What really distinguishes this collection, though, is a combination of verbal ingenuity and, courtesy of Scott Hutchison, characterful and witty accompanying illustrations.

The best of the poems have a sensual lyricism that transcends both the Bohemian excesses and the apparent capriciousness. In ‘Obsessive Cannibal Love Poem’, for example, Pedersen writes:

the biscuits I brought
to snack on are your bones baked
and sweetened; like counting stars
I do not think I will ever be done
kissing you: honey all over
and deep inside, I will swallow
your dancing tongue

The writing is clear, accessible and immediate – as befits on-stage performance, no doubt, but at times it suggests the simultaneous lightness of touch and depth of insight characteristic of, say, Norman MacCaig or Simon Armitage.

Pedersen muses over playful questions as well as large emotions. In ‘Starry-Eyed’ he asks ‘can a bell ring underwater?’; in the title poem he wonders ‘How does tongue taste to oyster?’ before concluding ‘Best not to know.’

The lively humour present in the words and images contributes greatly to the book’s winning charisma, and helps to over-ride the occasional lapse into outdated Kerouac-esque bluster or potential self-mythologising (as in ‘Invitation to Luncheon with Caddy D’ and ‘Manchester John: Episode II’).

The most successful poems tend towards dynamism, through their sheer verbal energy and their restless subject matter:

Birds and trains I love to
wake to, our great migrants, custodians
of perpetual movement, fucking
fascinating things – one engineered
majesty, the other … in fact that
goes fur both.

Pedersen’s imagery is often a startling delight. ‘I’m a PC’ begins with an arresting image: ‘Reilly’s chest puffs out like/a pair of bibles.’ Elsewhere the poet combines the ordinary and the extraordinary to appreciable effect:

I love you,
she said, with the mechanical bareness
of a warden clamping a car
to the pavement,
the payment meter and itself …

The fine, daft, clever poem ‘Transmorphosizing’ describes how a carpenter turns into a chest of drawers:

The middle drawer
was his heart – it had fallen off the runners,
jammed so tightly that to open it would
split the delicate wood; it would remain
closed, widowed.

This is typical Pedersen – to take an unlikely image and escalate it from a point of potential whimsy (the carpenter is called Chester Drawers) to a deeper, more affecting place altogether.

It is also this mature, more socially motivated Pedersen that approaches the subject of racism in ‘Conversation Overheard in Craigmillar Dental Practice’, a powerful and indeed unshakeable poem. The conversation, whether transcribed or invented (and I’d guess the former), is horribly plausible: ‘They’d huv you think you were sending them off to the electric chair rather than back to their ain fuckin country’; ‘Now I was thinking, eh – and hopefully you agree wi me – I’d rather be robbed off a Scot than yin o’ them any day.’ Here Pedersen confronts unpleasant attitudes with a detachment, a lack of commentary that results in a poem that is more, not less, disarming and effective; he allows the racism to present its own ugliness, with no overt additional judgement needed.

Scott Hutchison’s illustrations deserve a special mention. They are by turns imaginative, amusing, sensual and provocative and thus they provide a perfect visual accompaniment to the poems. Hutchison is best known as a musician, but it is no surprise to learn that he studied illustration at the Glasgow School of Art. On the evidence of his work in Oyster, it is very much to be hoped that he will provide artwork for more books in the future.

The poetry scene in Scotland has undergone some fascinating changes in recent years. Many Scottish poets of previous generations – such as Edwin Morgan and Iain Crichton Smith – were more comfortable, I think it’s fair to say, writing for the page than performing on the stage. Yet the contemporary writer is often expected to have a triple-layered presence: on the page, on the stage and online. The ebook version of Oyster is supplemented with audio recordings of the poet reading eleven of the pieces in the collection. While there are undeniably poets whose performance and/or social media skills surpass their literary merit, perhaps the future lies with poets like Pedersen who excel at all three.

The poem ‘Oyster’ features a line that could equally apply to this vivid and spirited book: ‘oyster has many magics’.

Oyster by Michael Pederson, illustrated by Scott Hutchison, is published by Polygon, 2017.

‘Play With Me’ by Michael Pedersen

Michael Pedersen’s aptly titled Play With Me is full of the writerly joy of playing with words, a delight in their sound and appearance as much as their meaning. Pedersen is drawn time and again to alliteration, assonance, consonance, onomatopoeia, rhymes and half‐rhymes, as if he is making patterns as much as poems; but his […]

If the book’s title and author’s name suggest a connection with Scotland this is entirely appropriate — Wilson grew up in Scotland and from the very first poem (‘Victorian Scotland’), a sense of Scottishness pervades her debut collection. The Scots Magazine, the Caledonian forest, Burns, Stevenson, Trocchi and Troon are all referenced. This is not […]