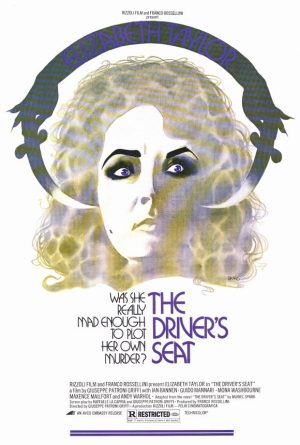 In most people’s lists of the best film adaptation of a Scottish novel, the 1969 version of Muriel Spark’s The Prime Of Miss Jean Brodie would deservedly be near the top, with a pre-damehood Maggie Smith winning the Academy Award for Best Actress for her portrayal of the title character. However, while that film has garnered the garlands and awards, it is not the only big screen adaptation of Spark.

In 1977 Michael Lindsay-Hogg directed Glenda Jackson and Rip Torn in Nasty Habits, a film based on Spark’s 1974 novel The Abbess Of Crewe. And then there is the strange case of The Driver’s Seat. Made in 1974, and with an alternative title in the US of Identikit, it starred Elizabeth Taylor in one of her last leading roles. It’s a curate’s egg of a film — in parts fascinating, in others frankly bemusing. To understand how odd this undertaking was it’s worth considering the nature and content of the original text.

The Driver’s Seat is a 1970 novella which Spark considered one of her finest works. It certainly shows the writer at her most extreme as she plays with readers, almost taunting them by subverting their expectations. What else could explain the decision to proclaim at the beginning of Chapter Three that Lise, the central character, ‘[…] will be found tomorrow morning dead from multiple stab wounds, her wrists bound with a silk scarf and her ankles bound with a man’s necktie.’ The Driver’s Seat is less a whodunit than a ‘whydunnit’.

When we first meet Lise she is dress shopping for her trip abroad, and immediately the reader is made aware that all is not well. When offered a dress which “doesn’t stain”, she rips the offending item off as if it burns her, angry that she should be offered such a thing. If she is going to have a new dress, she wants it to stain, for reasons that will soon become apparent. It’s an arresting opening, and sets an uneasy tone.

As she travels, Lise meets an array of strange characters. She spends time with Mrs Fiedke, an older lady who is waiting for her nephew to join her. The reader is aware that Lise’s behaviour is most unusual, but Mrs Fiedke is just glad of the company and doesn’t seem to notice, or care. Then there’s Bill, the macrobiotic diet guru who has to orgasm once a day as part of his strict lifestyle. Lise soon decides he is ‘not her type’. And that is the problem she has. She is looking for a man, but most of them turn out to be not her type, and she is very specific in what she wants. The men she meets constantly let her down, presuming that she is looking for sex, or at least sure that they are.

Many people miss the darkness in Muriel Spark’s work, but it was never more in evidence than in The Driver’s Seat. Although it is never specified, Lise’s journey appears to be about mental illness and challenges our attitudes towards, and tolerance of, people who have psychological problems and beliefs which are different to what is perceived as ‘the norm’.

The film version takes this premise as its starting point, and viewers are left in little doubt as to the state of Lise’s mind. Here, the casting is key. Elizabeth Taylor was always a natural screen performer but she became a much more interesting actor as she grew older and her own life became more complex. As with her more famous performances as Martha in Who’s Afraid of Virginia Woolf and Ellen in Night Watch, her pain (both that of Lise and Liz) is palpable. There is a real lack of ego in these roles as Taylor is prepared to put aside her star reputation to play unattractive, and often downright ugly, characters. In The Driver’s Seat she is mesmerising, capturing the apparently cold and unfeeling woman that Spark essays so brilliantly.

Ian Bannen’s performance is equally impressive as the obsessive-compulsive Bill, a man who is an unhinged mess of neuroses and who becomes the hyperactive counterbalance to Lise. These are both over the top performances (Taylor’s hair alone is terrifying), and they may be too much for some viewers, but they are what this film demands. There are also some lovely cameos, particularly from Gino Giuseppe and Mona Washbourne, and some distinctly strange ones – step forward Italian idol Guido Manneri, and Andy Warhol as an unnamed English Lord! But they are all just bystanders as the camera follows Lise to the bitter end, and in this it does justice to Spark’s original vision.

The final chapter of The Driver’s Seat is disturbingly dark and macabre, and in a lesser author’s hands could have been not only unsettling, but highly distasteful. There is a jet-black comedic tone which runs throughout the novel, and it is evidenced in Lise’s matter-of-fact approach to her undertaking. It turns out all her odd behaviour from page one onwards was leading to this point, and she has planned it meticulously, just waiting for that last piece of the puzzle to arrive.

The Driver’s Seat is one of the most honest books you will read. Is it really about mental illness? Well, Lise seems ‘crazy’ from the start, but then so does everyone else she meets, and at least she has purpose in her life. It’s more about the value of life, and who gives that life value. Is it the individual, or society, or something else? I think that Muriel Spark saw existence as a cruel joke, with her fiction a reflection of her worldview, and that was never more clearly, or memorably, expressed than in this novel.

Unlike the book, The Driver’s Seat is not a great film. Director Giuseppe Patroni Griffi is better known as a screenwriter, and had a background in theatre and opera which may explain some of the acting decisions, but he makes a brave attempt to understand Spark, and does achieve a tone which feels appropriate, especially when it comes to costume and colour. Stylistically it has the feel of a Fellini movie that has been edited by David Lynch and it all makes for a really unusual and unsettling experience. But it is most interesting for bringing two female icons of the twentieth century together, and for any fan of Elizabeth Taylor or Muriel Spark it really is worth a watch.