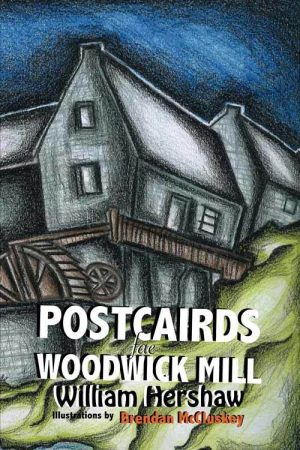 Postcairds fae Woodwick Mill is the latest collection from poet, teacher, musician and songwriter, William Hershaw. Written in the Lallans Scots of Rabbie Burns, the collection comes with a CD of poems, beautifully recited by Hershaw, some with musical accompaniment.

The CD gives a clue to the fertile ground from which these offerings spring; many of the poems are firmly rooted in the traditions of folk song and folklore. They revolve around the turn of the seasons, the wind and weather, the birds and beasts of field, sky, water. They’re peppered with recognisable characters: the ‘puir tink’, the haughty mistress, the raging father, the wayward daughter, the drunken farmer stumbling home from market.

As can perhaps be gleaned from this description, this isn’t a collection for those seeking the avant-garde, the cutting-edge of today’s poetics. There’s nothing new here per se but one gets the impression that Hershaw is not trying to ‘make it new’. There’s no attempt to break through linguistic boundaries or experiment with unusual modes of poetic expression (unless, perhaps, in the quietly witty lament for ‘Schir Mungo Lokert o the Le’, a blank page with the footnote ‘Schir Mungo Lokert is one of the poets listed by William Dunbar in the Danse Macabre Lament for the Makeris written around 1505. Nothing of his work has survived for posterity.’). Hershaw’s collection is more a celebration of the poetic forms and constraints that come out of the great Scots oral tradition: the simple rhyme schemes, the long narrative of ballads and folktales, the sonnet, the ditty, the prayer.

In the course of the collection, Hershaw travels between Orkney and Fife and many Scots poets are given a passing nod along the way — MacCaig and MacDiarmid, Muir and Morgan amongst others — but Hershaw resembles none so much as Orkney poet George Mackay Brown, at least in his subject matter. Island life (‘Seiven verses for GMB’, ‘The Gloup, Deerness’, ‘Islanders’); religion (‘The Guidman’s Gifts’, ‘Prayer for Minding’, ‘Saint Magnus Cathedral’); animals (‘Wabster’, ‘Tae a Frichtened Hare on a B Road’, ‘Buird’); the harking back to a simpler past (‘Gowden Threids’, ‘Waakerhoose Mill’, ‘Grandfaither’s Auld Hoose’); and the follies of the modern-day world (‘Royal Oak’, ‘Extinct’, ‘Onding’) are all present as they are in the work of GMB. That’s not to say that Hershaw has the ‘austere, elegiac beauty’1 of the Orkney bard but there’s a hint of Mackay Brown’s metaphysical-grounded-in-the-everyday, his ‘strong sense of the physical world2 in lines such as these from ‘Watter Sang’:

Roused up in a cauldron shout,
a gurly roar o Atlantic sang,
rising, we were wrocht, ice-seedlins
in siller cloud-womb, our distillation
rocked abuin belling ocean,
then spilling saftly oot the West:
Tae be life,
tae gie life,
sing we.

Like Mackay Brown, Hershaw experiments with the ballad, the sonnet, the acrostic, his Christian faith often informing his philosophical quest, his sense of ethics. ‘Calendar For A Smaa Post Industrial Toun’ also echoes GMB in its gentle imagery, its hint of ritual, its seasonal liturgy:

Hershaw’s focus, however, is very much on the Scots words and he employs them to great effect, most obviously in ‘Onding’, a joyous thunderplump of language that plashes down the page in a furious torrent

His unbridled love of the language and linguistic history of Scotland is evident, and it is this, more than anything, that makes Postcairds fae Woodwick Mill an excellent teaching resource for anyone seeking to keep Scots alive in the classroom. That it should work so well is not surprising, given that Hershaw is passionate about teaching Scots in schools. (He has also produced two textbooks on the subject.)

The child-like simplicity of poems like ‘The Otter’, ‘Windhover’ (which has the added appeal of a ‘puir mousie/ pish(in) herself’ and ‘Twal Grey Men’ with its deliciously creepy undertones …

Twal grey men
Hammering on the door,
In the deid o nicht
Dreepan fae the shore

… makes them perfect for primary schools. Indeed, many of the poems have the rhythm and rhyme that children delight in, the long narrative that keeps them engaged and illustrations (by Brendan McCluskey) that have a certain child-like appeal.

In addition, there’s Hershaw’s gentle tongue-in-cheek humour. In ‘Wee Fergie’ (an ode to Robert Fergusson), Burns is described as a ‘Lallans Elvis’ while Satan in ‘Onding’ is ‘Crombie coated’. Burns’ ‘To a Mouse’ is also brought to mind in a later ditty ‘Mousie’. While the latter might have the great bard birling in his grave with its talk of zombie mice turning up again and again in the mousetrap each morning, I suspect bairns might prefer it to the original.

Add to this the many cross-curricular possibilities—Hershaw’s curious pen scribbles around science, politics, philosophy, history—and the intertextual references to Sunset Song, Garioch’s ‘At Robert Fergusson’s Grave’ and The Clash’s ‘London Calling’, and the poems become stepping stones to many different areas of study.

Hershaw is probably not going to change the future of poetry but he just might help to ensure that Scots language is kept alive and kicking in our schools. And what a great gift that is. As the collection’s final stanza says, in a manner worthy of Burns himself:

It’s a delight to review two publications by Fife poet William Hershaw, not only because I’ve admired his Scots and English over several decades, but because the physical make-up of the two books are at very different ends of the book format. Stars are the Aizles is an elegantly produced hardback book, unusually sized and […]