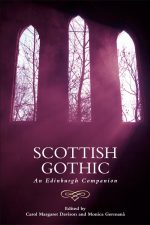 The Scottish Gothic has received some outstanding critical attention in the last decade, with monographs by Monica Germanà and Timothy C. Baker building on earlier work by Ian Duncan, David Punter and others, invigorating the field in challenging ways. The new Edinburgh Companion bolsters and develops this, taking a largely chronological look at Scottish Gothic across sixteen chapters ranging from the border ballads and James Macpherson’s Ossian’s Fragments of Ancient Poetry, to queer and contemporary female Scottish Gothic by way of film, drama, poetry and prose. For the most part, the collection avoids the critical cul de sac of trying to define what Scottish Gothic is, instead, as editor Carol Margaret Davison puts it, ‘illuminating a myriad of synergies between ‘Scotland’ and ‘Gothic’’ (39). A few of these connections are by now familiar (James Robertson’s drawing on Hogg, Muriel Spark’s debt to the ballads) but for the most part the collection approaches existing work on Scottish Gothic from new angles, while bringing plenty of fresh discussion to the table.

Early chapters lay a convincing historical foundation of national connections to the Gothic, with Nick Groom differentiating the way Gothicism, Celts and the Celtic have been imagined and portrayed, particularly under the pressures of eighteenth-century Whiggish narratives of history. A strong case emerges in Davison’s chapter, meanwhile, for Ossian’s place, forged origins and all, as central to Gothic in general and Scottish Gothic in particular, its sensibility towards the supernatural and its connecting of landscape to psychology forming a major alternative eighteenth-century Gothic ethos to The Castle of Otranto, and winding Horace Walpole up no end.

Two chapters consider poetry. Hamish Mathison’s, on bodies and bellies in Burns as ‘a Gothic occlusion of essence’ (48), weaves a challenging theoretical discussion centred on representations of the body in poetry from the eighteenth-century to the present day, in relation to what he describes as ‘the Gothic vulnerability of the Scottish voice’ (57). Alan Riach’s identification of a medieval sensibility in poets from Dunbar through MacDiarmid, Thomson, Lochhead and others traces perhaps a more tangible Gothicism in Scottish poetry, and makes for many enlightening points of connection. There are other valuable chapters on non-prose texts here too. Barbara A. E. Bell’s account of Scottish Gothic Drama through the centuries adds further detail the historical context of political censorship during the Gothic revival period laid down in earlier chapters, and conducts a survey of Scottish plays and productions, uncovering a consistent engagement with ancestral identities and Gothic inheritances in drama which continues today. A chapter on Scottish film by Duncan Petrie identifies recurring Gothic motifs and themes in two representational cinematic traditions, of Scotland as sublime wilderness and as urban space; affinities with contemporaneous movements in Scottish prose fiction become apparent throughout.

Other chapters cover Calvinist and Covenanter Gothic, and Scottish female Gothic and the Island. A thoughtful chapter on J. M. Barrie, by Sarah Dunnigan, further reinforces that writer’s place within the Gothic field, a critical positioning already much in evidence this century, while reinforcing the balladic echoes running through much of this literature. Robert Morrison’s fascinating chapter on the innovation and influence of Blackwood’s Magazine, meanwhile, describes the way its articles and political outlook often ‘represented the world as corrupt and deeply unstable’ (131). Morrison also identifies Blackwoods’ pioneering approach to the short story and its emphasis on ‘intensification’ in conveying literary terror, which made its mark on Poe, Radcliffe, Lewis, the Brontës, and Dickens, casting an influential shadow over the wider Gothic scene. Here, and at other points, the collection works against isolationism for Scottish Gothic, showing continuities with the Gothic more widely, particularly in the nineteenth-century.

There are a few minor shortcomings, most of which the editors acknowledge in their introduction – Margaret Oliphant is barely discussed other than as a predecessor to J.M. Barrie’s romantic ideal that the living and the dead remain connected. The introduction also unproblematically defines texts including Lanark and The Trick is to Keep Breathing as Gothic, without further explanation. Gerard Carruthers takes a whistle-stop tour of Muriel Spark’s half century of published fiction and, of necessity, texts are covered relatively fleetingly; his discussion is a valuable starting point in tracing the Gothic influences through Spark’s oeuvre, one which merits further expansion. Kate Turner supplies a welcome discussion of Scottish queer Gothic, looking at texts by Louise Welsh, Luke Sutherland and Zoë Strachan. Turner’s analysis of the ‘exploration – and at times celebration’ (219) of monstrous figures in queer Scottish Gothic, outwith traditional configurations of fear and fearfulness, is timely and engaging, although her thesis insists that ‘haunting and fracturing incoherencies [are] inherent in the Scottish position as ‘other’’ (208) and ‘liminal’ (209). One or two other writers in the collection also adhere straightforwardly to the idea of centrality as something always lying outwith ‘peripheral’ Scotland, a conception which has often informed writing on Scottish Gothic (and Scotland in general) and which, in the light of recent debates over self-determination, perhaps requires some re-examination.

A chunk of the collection tackles that inescapable ‘big three’ in chapters titled ‘Gothic Scott’, ‘Gothic Hogg’ and ‘Gothic Stevenson’. Fiona Robertson takes account not only of Scott’s fiction but of the author’s reviews, advice, and critical considerations of Gothic effects and tropes. Roderick Watson’s discussion of abjection in Stevenson’s Gothic is enlightening, while Scott Brewster studies Hogg’s gift for the contested narrative in a discussion of his major novels. These are all valuable, and necessary, contributions. Inevitably, as the editors confess, ‘the straitjacketing image of Scotland as a divided Jekyll-and-Hyde-monster of a nation rears its head in nearly every chapter in this volume, a spectre with which Scottish writers have had to wrestle since the Act of Union’ (2). Indeed, the reference to and influence of earlier Gothic texts emerges throughout the collection as a distinctively national element in Scotland’s Gothic make-up.

Timothy C. Baker has already documented this intertextual haunting in his own monograph Contemporary Scottish Gothic, and applies further analytical pressure to it here. In Baker’s account, texts become the relics of today’s Gothic, a mediating force acting upon characters’ understanding of themselves. Ranging over a broad selection of texts, including a striking consideration of Iain M. Banks’s Surface Detail, Baker tackles the looming monoliths of Scott, Hogg and Stevenson productively with an eye on progressing the debate, incorporating them into a wider process of reclamation and reconsideration. This is not merely the repetition of tropes, Baker argues, but the utilisation of what has gone before to question politics, history and the self. From this perspective, there is no singular Scotland, and ultimately no singular Scottish Gothic, a view that emerges throughout the collection.

Any small limitations in the Companion are far from problematic, since this collection will likely become a reliable jumping off point for further study as well as a productive resource in itself. As an introduction to Scottish Gothic it is accessible and forward-looking, incorporating challenging critical analysis and lively survey overviews, and covering an impressive range of writers and texts. The Companion makes clear that there is plenty more to be uncovered and debated in Scottish Gothic, exemplifying a critical field that is very much in bloom.

Madness. Ghosts. Desire. The latest novel by Lesley McDowell ticks all the boxes of a good Gothic novel. And as many a good Gothic novel does, it pays homage to its predecessors. The novel’s title is one of the most poignant lines from Mary Shelley’s Frankenstein (1818), where Frankenstein claims that ‘we are unfashioned creatures, […]

“It’s an unco place, the Bass”: A Scottish EcoGothic interrogation of Robert Louis Stevenson’s ‘The Tale of Tod Lapraik’

Nick Groom, in his article considering the Celtic roots of a Scottish Gothic, states that its Scot-Celtic past evolves from ‘antiquarianism, racial politics and national identity, and, as such, the terms [Celt and the Celtic] are not dissimilar to “Goths” and the “Gothic”.’ This Celticism, whilst akin to Gothic imaginings, also has a rooted tradition […]

‘[…] a distant country from which I now live’ – Walter Scott, the voiceless, and Blackwood’s Highland Gothic

The study of Scottish Gothic has been dominated, almost inevitably, by the presence of the 1707 Act of Union. This essentially political event embodies cultural implications whose persistence has affected not merely those fictions historically written out of Scotland but also the critical interpretations imposed upon them from the eighteenth century to the present day. […]