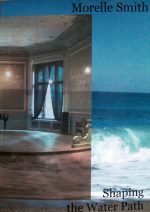 Shaping the Water Path is Morelle Smith’s first collection since 2014, and marks a return to the publisher, diehard, with whom she published Deepwater Terminal in 1998 and The Ravens and the Lemon Tree in 2008. Diehard prides itself in keeping poetry accessible, so this collection retails at just £5, about half the price or less than you would pay for other poetry collections. I applaud diehard’s philosophy, and can say that this is a lovely volume, outside and in!

Smith is a travel writer as well as a poet, and travel and place strongly informs this collection. She has a clever way of finding places as the people who live in them will find them, as an observer and not as a tourist at all. And place can also be people, weather, and the life of all kinds that inhabits our natural world. The touch of this expert is a light one.

Shaping the Water Path is divided into four sections, bringing together poems of Scotland, of Chester and Wales, of Further Travel and including a short section of prose poems. The collection starts in Scotland, from Edinburgh, Eildon Hill and a weather-place called ‘Last Flurry,’ before journeying to Chester and Llandudno, and on to Dublin, France, Poland, Ukraine, Hungary, Greece, Cyprus, Kosovo and Albania. It might seem like a whirlwind, put like that, but we’re safe in Smith’s hands, and the journey beautifully paced. It is also, interestingly, not only about journeying but about coming home.

What strikes in the ‘Scotland’ section is the muscularity of the writing and the tactility of image. These are poems we can see, breathe, feel, smell. The poet is clearly drawn to wildness of landscape and weather, and is unafraid. In ‘The Carrying Wind’, the wind is both blustering, ‘like a heavy-footed dancer in the trees’, and caressing, ‘the strands of a whisper / in your ear’. There’s a sadness here, the strength of the weather making the poet ‘imagine souls about to leave the body’, but also hope in ‘a power we recognise’. We can feel the breathlessness when the wind hits our nostrils, the drawing in of breath when we can. In ‘Flight Paths’, the geese are ‘black wriggling points against / the blue of the sky, a liquid thread of writing’. This one made me look up, and realise how much time we might spend in our own eye-line. Finally in this section, ‘Storm Gods of the North; stayed with me long after the reading:

We who spend so much time
hollering for sunlight –
don’t we know that living here
we’re closer – not to the sky
but to the sky-domain
where there are gods we have forgotten
maybe, but they have not forgotten us –
these gods of laughter, turmoil, storm and rain.

The next very short section starts with ‘Chester Morning Orchestra’; not simply a chorus, this poem notes. This is the detail of a morning, captured in birds, the view of a poet who has really, really watched. The imagery is delightful: ‘A fringe of birds, high up on a beech tree, / are pegging the leaves to the sky.’ And then, in ‘Day Trippers and Dream Sellers’, we are hurtling through the Welsh valleys, the train hooting for joy as it heads towards the sea. Nature is in charge here, and we are along for the ride. There’s a relationship, though, a dialogue:

we keep one eye on the silver strip of light
that marks out the river
It cannot help itself. Beneath this covered-over sky,
it has to shine.

The three prose poems – of which ‘Shaping the Water Path’ is one – provide a time to sit before the next set of travels. They are reflective pieces, moments caught, time taken to really look, and then to use image laid upon image, building layer upon layer of colour, texture and meaning. We are invited to look just a little deeper, to consider where we stand in the picture.

And then, onwards to the longest section of the book, the poems of ‘Further Travel’. These are about travel and who we are when we travel, about survival, and about belonging, as much as they are about place. We visit cities and countries – Dublin, Budapest, Paris, Kosovo, Ukraine – and there’s a sense of walking, of pacing out these places, finding history – with its war and destruction – in our steps and bringing it together with the present. In the end, we are ‘civilized’ by our knowing of place, its history, its buildings and its people. In’Labyrinth in Larnaca’, a poem of just fourteen lines, is what seems to me a final summation:

Like everybody else so I imagine
I’m looking for the moment that will stop me
in my tracks – that’s not composed
of time, passage and change.
Since I know that it exists,
I look in warehouses, lockups …
… and not, supremely not,
in the hidden, tucked away back alleys
of the human heart.

Shaping the Water Path by Morelle Smith is published by diehard, 2017.