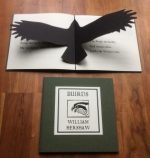 It’s a delight to review two publications by Fife poet William Hershaw, not only because I’ve admired his Scots and English over several decades, but because the physical make-up of the two books are at very different ends of the book format.

Stars are the Aizles is an elegantly produced hardback book, unusually sized and striking in its deep blue batters. Inside, the text is conventionally printed and left to breathe in generous white space.

Buirds is a small, handmade, hand-stitched chapbook with striking bird linocuts by Fiona Morton, a talented young printer being mentored by the ever-generous Hugh Bryden. It’s part of a larger project with Wullie and Fiona creating a Baistery of real and imagined Scottish beasts and birds. Open the central pages and a large black crow leaps from the pages, held back only by its spinal attachment.

What might hold back some readers, is Hershaw’s rich and dense use of Scots in both books. For this reader, it’s what gives the books a wonderful attraction. The Scots rhythms and vocabulary often emulating the sounds and movements of birds and stars themselves. Hershaw is a Fifer and his Scots is authentic, you can hear the spoken voice, its rhythms and cadences, but you also admire his orthographic skills; his written Scots is elegant, wide-ranging and consistent.

In Buirds, he anthropomorphises grouse and magpies, provides acute observations of the colours, movements and sounds of a range of birds and often locates them in a particular Scottish setting. The Fish Eagle is a Lord of the Western Isles, while Eagle becomes The Guidman o Ballendreich. He has a keen eye for the movement of birds. The Rook ‘Flings itsel aff a fence, gey frisky, / Juist for the joy o it, faas’. And the doo is a ‘puffed up preenin wee paircel o shite’, while the barn owl has ‘A canny heid, a wyce heid, / A tentfou heid fou birlan’ In the longer poem Grouse, a dialogue – in fact a flytin – takes place between a grouse and a craw. While the grouse sees himself as far superior to the craw and not ‘ma social equal’, the craw is quick to point out that, ‘Come August, you’re as guid as gaun’.

Stars are the Aizles is a full length collection gathered, as Hershaw points out in his foreword, over forty years. He explains the title’s word aizles – sparks made by a pick striking stone or coal – thus reminding us of the mining legacy of the poet’s Fife background. In fact, the collection’s full title is taken from the poem ‘God the Miner’, inscribed on David Annand’s statue in Lochgelly. As Margaret Bennett states in her foreword, ‘the subjects of Hershaw’s poems reach far beyond his native Fife’. And so they do. Social issues, Shakespearean characters, elegies for friends and the famous and the lovely poem ‘God (in the image o a miner)‘:

Bennet’s foreword refers to Hershaw’s terrific 2014 Edinburgh Festival Fringe script for The Joe Corrie Project, and the world and worries of the mining community are explored in several poems. ‘The price o coal is nine puir miners sauls’, is a concise reminder of one particular mining disaster.

Beyond the collier concerns there are elegies to a wheen folk such as George Mackay Brown, William Soutar and personal friends such as Kevin Kerr to whom the book is actually dedicated. One of the most powerful poems in the collection is The Lockerbie Elegy and this poem has been anthologised on several occasions. It’s a remarkable piece of work, nine by eight-line stanzas, meticulously crafted and managing to be both factually detailed about the fall to earth of the Pan Am jet but also questioning ‘Wha fashioned their foul fate?’. Religious and philosophical musings recur throughout the collection and none more so than in this elegy:

We bide on the yird brek ben our quick life-cloud
Tae non-being, bliss, speirit-lowse or hell.

Pity and prayer permeate the poem, ‘Pray, pity them then, / That fell sae feart fae unfaddomed hecht,’ and ultimately he includes us all, ‘Pray, pity us aa that maun faa, December daith rain’.

But Hershaw can shift the readers emotions and no sooner are we plunged into fear and horror, a concern for folk struggling in the social system – see ‘Caliban on Benefits’ – we’re moved to laughter. Whether it’s the Gaffer instructing bees to ‘adapt tae survive or your industry gans doun the river’ or ‘Dinnae‘, which lists the many occasions where political correctness is required, including ‘dinna shove your grannie aff a bus’, there’s always a serious issue being obliquely explored.

Whether scrievin on bird, beast or human bodie, Hershaw is, as Margaret Bennett writes in her complimentary foreword, ‘someone at ease with his own tongue’.