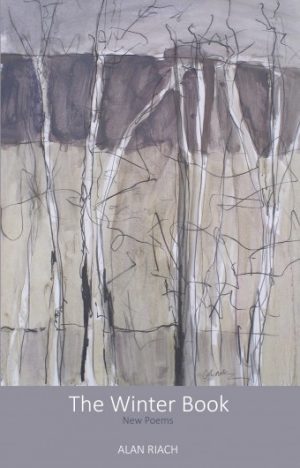 The heft, both physical and intellectual, of The Winter Book reminds me of a phrase Norman MacCaig once used about his writing practices as a poet. He said that he spent his long holidays in Assynt as an excuse to ‘fatten up’ his ‘camel’s hump’ of images to live off (i.e. write poems) through the privations of the rest of the year working and living in Edinburgh. It’s worth noting that MacCaig rarely materially left Scotland, and neither does Riach spiritually – even when we find him abroad he is often casting his thoughts back to the state of Scotland, or in fact lecturing about, and teaching, Scottish literature. Riach is preparing us for tough times ahead with long, substantial and calorific provisions of poems – sometimes challenging, sometimes entertaining – to keep us going and remind us of the worth of human striving and creative effort, even in darkening times. For Riach, as for many of us, these troubles are a tangle of both personal as well as national and overarching concerns, and we discover that he has only recently lost both of his parents. While the collection certainly strikes a threnodic note on a number of occasions, or an angry note at the demoralising result of the 2014 Independence Referendum, what makes it so special is its refusal to keep its melodies strictly in the minor key. And music too, is central, as evidenced by ‘The White Sands of Morar’, a poem about Master of the King’s Music, Arnold Bax, going to a wintry Morar to focus his mind on the task of completing his Third Symphony:

We have been through the tangle
of beauty and brutality, the world we human beings make,
looking for something else, what Herman Melville called
‘the ungraspable phantom of life’

We cannot grasp it, of course. We never will. All effort fails.
And yet,
if we are true to the quest, grace and repose may fall at last,
from beyond the scope of human will, from nature.
In a place like this, perhaps.
Like this.

Riach’s poems help to thaw the ice of our difficult age, like the leg broken on a frosty pavement at the start of the book enables the sufferer to read and re-engage with the power of imagination. These poems always find a positive to emphasise in a straightened situation. In the introduction we are told that Riach’s father died ‘three weeks before his postal vote’ (in the Independence Referendum) but ‘he converted five of his carers. And they converted their husbands. I would call that a victory, as far as can be’. Throughout the collection we are made aware of how divisions between high and low culture are useless binaries and that Scottish literature can utilise whatever it likes from the creative arts and it can do so in its stride. This explains why these poems are such a vast bricolage of references. Out of the doomed vote for Scottish Independence comes this effective little squib, riffing off the American television series ‘True Detective’:

‘Looks like the dark has most of the territory.’

Riach employs humour seriously, as a way of keeping the mind open to all moods and experiences. ‘The Tinguely Contraption’ is an mechanical art installation with a pedal that Riach comes across in a gallery, and his curiosity gets the better of him, despite his wife’s warnings not to embarrass himself by playing with it. In another poem Marshall Walker, Riach’s late friend and colleague, stresses the ‘intrinsic optimism of curiosity’ and how it’s about remaining open to change. This reminds me quite strongly of Margaret Tait’s wonderfully warm 1964 portrait of Hugh MacDiarmid where we get to see both the intellectual heavyweight talking about his plans for an epic, political poetry as well as the poet being caught chuckling as he naughtily chucks stones into a burn. There’s a playfulness that’s necessary if a serious point is to be put across memorably and effectively – it’s about varying the tone and texture, which is in its way a musical and artistic thing as well. ‘The Dancers’, a joyfully ekphrastic poem inspired by J. D. Fergusson’s masterpiece ‘Les Eus’, works on the idea that Fergusson is presenting us with an idealised vision of pure health – of naked dancers unencumbered by society’s repressive values. But Riach reminds us that this is not mere wish fulfilment and far-fetched quixotism – ‘What Fergusson says, though, is: This is for real.’

But don’t think this poetry is about sloganeering – if it attempts to proselytise you to a certain cause, then that has been arrived at through serious and profound thought. Riach is both an optimist and a realist and his overwhelming drive is a meliorist one – that the arts help us to live better lives and to articulate the ways of doing so. It is too long to include here, but look at Riach’s reading of Wordsworth’s poem ‘The Solitary Reaper’ in ‘The Reckoning’, if you are at all in doubt about the depth of Riach’s commitment to the arts and their beneficial effect on humankind and his anger at those philistine ‘Managers and their advisers, politicos and media mouths, / the Bandar-log’. Not only are there poems of reproach for those who voted ‘No’, there are poems with the satirical and vaudevillian bite of a John McGrath play: ‘We are the wealthy whose wealth you make grow / With your happy cross that signifies No’ (‘After the Day: A Jolly Song’). There are also poems that attack the wholesale take-over of universities by the bureaucratic and managerial elites who focus on business and are invariably unsympathetic to the creative arts:

(…) What gets cut is the human support.
What’s most required is pressed underground:
the contact, dialogue, the subject itself.

Perhaps the two main things to take away from this collection, as we journey through its wintry social, literary and physical landscapes with Riach acting as guide and lamplighter, is the importance of vigilance and of the worth of peripheries. In ‘The Side Road to Stewarton’ what was supposed to be a shortcut ends up as an adventure on a beautiful snowy day on an unexplored back-road, which reminds me of Les Murray’s idea of a ‘curlique’ – a detour that proves more interesting than the destination. The motto of Riach’s birthplace was ‘Semper Vigilans’ and Walter Scott’s family maxim was ‘Watch Weel’. We have to be alert to both beauty and brutality and the changes that do, or don’t, happen around us. In ‘Suileachan’ (Gaelic for a mixture of ‘warning’ and ‘vision’) we are told ‘the lesson is: what brings the heart to the eye’ and all along Riach is fighting to get us to open our eyes wider and to let more in rather than shutting it out. His distrust of the managerial class is simply a microcosm of his larger belief in the value of the periphery over the metropolitan centre, and this can only exist in a climate of opposition – London vs. Scotland, Yes vs. No, Dark vs. Light etc. It is as if the negative forces need to exist in some guise to keep our striving focussed. It may look bleak, but these poems urge us to keep the faith. The closing poem brings us to ‘The Well at the World’s End’, where the ice has melted and water is abundant, showing us that we will find sustenance, even at the most extreme of places:

Whatever it is that stays visible and clear
In the now and the here, what the whole world, and people
in a place like this, hold dear.

The Winter Book by Alan Riach is published by Luath Press, 2017.