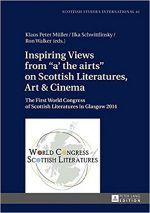 This edited volume of written up papers given at the first World Congress of Scottish Literatures in Glasgow in 2014 is the latest volume in the ‘Scottish Studies International’ series from Peter Lang: International Academic Publishers. Two words of particular note in the previous sentence:  ‘international’ and ‘literatures’ (plural), and the double-edged quality of the phrase from ‘a’ the airts’ in the title suggests that we are not only hearing from all directions (as in the Scots word ‘airts’) but also many of the arts. We hear from a polyphony of international voices (UK, Europe, America, Canada), from early stage academics to professors emeriti as well as literary practitioners themselves (poet Henry Marsh and poet/novelist James Robertson open the volume as they did the conference). The papers themselves cover art, poetry, prose, cinema, history, politics, print culture, philosophy, and include more theoretical and general pieces on the state of certain stands of Scottish literature, such as Robert Morace’s fascinating piece on Mapping Post-Devolution Scottish Fiction’ which argues for a more localised and contextualised study of Scottish literature. This reminds me of one of Tom Leonard’s poems that states that ‘the local is the international’ and ‘the national is the parochial’.

The editors in their introduction claim that this volume is evidence of the ‘coming of age’ of Scottish literature as an academic field, and on the basis of this book I would say that it seems to be in rude health. They have succeeded, in their own words, in ‘internationalising and diversifying the field of Scottish Literature’, or at least they have set about laying down important groundwork that enables connections to be made. The novelist James Robertson poses the question ‘Shall there be a Scottish literature?’ in his paper and comes to the resounding conclusion that of course there shall, as long as the will of the people is to acknowledge, read and contribute to such a literature’. Robertson’s point is that for too long too many people have been ‘deprived of ownership of their culture because they are not given the access codes, the passwords, to it’. While this book will inevitably end up being consumed mainly by academics, due to its cost, the intention of the editors and contributors is sincere and to be applauded.

More than this, many of these chapters set out to recruit new readers by presenting overlooked texts or new approaches to very familiar works or writers. On one hand, you have a well-known authority writing about an under-explored aspect of a very well-known writer or work, such as Gerard Carruthers exploring the ‘fraternal networks’ of Robert Burns and how these helped to shape his work. Instead of merely dismissing Burns’s memberships of homosocial societies and drinking clubs as undesirable (‘rebarbative’) by modern standards, Carruthers argues that scholars must look again, and the very lexis used in Carruthers piece (‘networking’ for instance) suggests a new approach is needed. On the other hand, you may well come across other pieces in this book that try and bring new subjects or overlooked works into academic currency. There are a number of chapters on John Galt that make high claims for The Omen (1825) which Ian Duncan claims is an ‘outlier’ in the author’s oeuvre and Angela Esterhammer argues is a proto-Gothic text that has a ‘strangely modern and even postmodern inflection’. In a similar veinm Len Wanner brings the Scottish ‘serial killer’ novel genre into consideration with his chapter on the works of Val McDermid and Stuart MacBride. Miriam Schröder makes a more profound social point about Scottish literature’s tendency to focus on issues of nationalist urgency at the cost of the marginalisation of the experiences of Scottish ethnic minorities and while such a literature might pride itself on being both inward and outward looking, there is still much work to do in redressing the balance. The presence of such articles shows there is still much work to be done and proves that the optimistic notes that the book makes for Scottish literature are not willed, self-deluding or in any way forced. While the work in this volume predates the Scottish Independence Referendum of September 2014, it still reads in an overwhelmingly encouraging and celebratory light.

Without sounding tendentious, the chapters I most enjoyed were those that operated within my own research purview of modern Scottish literature and poetry, such as Ron Walker’s valuable chapter on the nature writing of Nan Shepherd and W. H. Murray, and Roderick Watson’s powerful survey of the Scottish poetry to come out of World War II, where he argues there was a global loss of innocence twinned with a desire on the part of the participant poets to re-imagine society along more democratic, socialist and equitable lines. The book itself is well-structured in that it begins with the voices of practitioners themselves then moves into specific academic discussions and closes with more general social, theoretical and political surveys of the landscape(s) of Scottish literature(s) such as Klaus Peter Müller’s chapter which looks at the idea of post-history, or the Lukácsian idea of the individual wrapped up in vast swathes of history and ideological transition. Against inertia and passivity, Müller contends (like James Robertson) that more connections need to be made, which is precisely what most, if not all, of the chapters in this volume are concerned with. Gregory Smith’s famous 1919 theory of the ‘Caledonian Antisyzygy’ is evoked on a number of occasions and while there is still a certain lingering attraction to that idea of a split national psyche, the overwhelming impression this book gives is of an interdisciplinary ‘syzygy’ that prizes ‘particularity’ and inclusivity over ‘homogeneity’ and exclusivity.