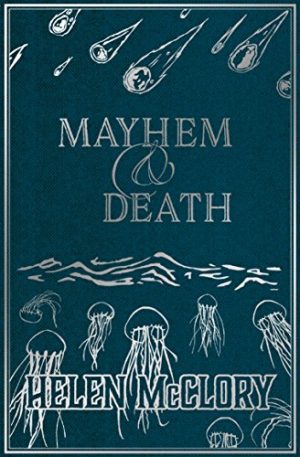 After her 2015 debut, On The Edges of Vision, which won the Saltire First Book of the Year award, and the novel Flesh of the Peach (2017), Mayhem & Death – a collection of flash fiction between one and three pages long – marks McClory’s return to the short form. The collection, boasting thirty-seven stories and one longer text, is placed under the auspices of its two dedications, ‘to the lonely’, and ‘to the lost’. And rightly so, as almost all the stories recount tales of people who have been left behind, and in which, as the book’s title indicates, loss more often than not comes in the form of death.

The world sketched by McClory, in small, impressionistic touches, is a world where communication is lacking. The novella ‘Powdered Milk’ exemplifies that, telling the story of a scientific base established at the bottom of the ocean which sees its connection to the surface world cut off. And many of the stories metaphorically take up the topic: a mother trying to cope with the loss of her daughter in the first story, ‘Souterrain’; in ‘A voice spoke to me at night’, an unnamed narrator, living in a newly built ‘history-less’ (89) flat with only a phone for company, and Tinder to ‘look at some faces’ (90), hears a gruff voice speaking from the past in a form of old Scots; a young woman swimming and thinking about death in ‘How best to be best’; a ‘pharmakos woman’, a human sacrifice in some sort of loosely defined death ritual, who muses about ‘seas where the dead lie’ (55) in ‘Pharmakos’.1 All those characters form a gathering of lonelies who soliloquise, sometimes speaking to the reader, sometimes to an unspecified interlocutor addressed with the pronoun ‘you’. They tell their tales of separation, encounter ghosts, and generally crisscross the frontier between life and death, exploring special access routes. The sense of isolation is so intense that, in ‘A voice spoke to me at night’, it becomes a conduit to other lonelies in history, when the narrator claims that ‘I can’t help but feel like the reason he could see me, across the years like that, and really improbably, was because of the force of his loneliness, making a portal or something’ (97). Death is omnipresent, presented in its gory details – blood pools by a body, reddens a murderess’s arm; ‘good red wounds’ abound (69); a man takes a bath of acid, the event being described from his point of view, when ‘the acid began to froth around [his foot] eating it away’ (87). As McClory herself puts it in an interview: ‘quite dark’2. Dark and corrosive – if I may venture the risqué metaphor – when we relate the story about the acid bath to its title, ‘The expectation of a job well done’.

Irish writer Frank O’Connor defines the short story in terms precisely of this thematic characteristic, when he says that ‘There is in the short story at its most characteristic something we do not find in the novel – an intense awareness of human loneliness.’3 In Mayhem & Death, it is form, not just themes, which fulfills this goal. The very genre, flash fiction, makes for stories which, even more than ‘conventional’ short stories, go straight to the point, often elliptically, having to do without the establishing of setting, character and motives. In that respect, McClory’s incipits are remarkable – ‘Pleasure is a shade falling over your face, barring the eyes, which glow with feelings that frighten and persuade’ (53) – as are the collisions she organises between title and contents of the story. Those collisions indicate spatial or temporal disconnectedness, as in ‘Souterrain’, and ‘Lore’. They negate, or offer a quizzical rendering of what is being asserted in the story, as in ‘The expectation of a job well done’, or ‘Distinctive natural pattern’, a murder story the title of which points to the pastoral, emphasising the magic power of resolution contained in nature. They also offer inter-textual connections in order to de-familiarise and therefore question our familiar assumptions. The title ‘This land’ is reminiscent of Kathleen Jamie’s poem ‘Here lies our land’, in a story which skews the historical association of ‘our land’ when, to quote the opening line, ‘this land’s so full of spikes you wouldn’t believe’ (31).

The scarcity of temporal and spatial references also creates a superstructure for the various pieces, which links them to the no-place of fairy tale and magic, although this is done through a glass, darkly. Many of the stories, like ‘This land’, are magic realist, as is ‘Automaton town’, a mise en abyme kind of story which describes a show put up in a ballroom in which people watching the transformations of the automaton town turn out to be watched by other, external eyes and therefore become the mechanical inhabitants of the automaton town themselves. Magic realism therefore contributes to the strong sense of entrapment which is conveyed by the stories. So do alliterative titles – ‘Automaton Town’, ‘How Best to Be Best’, ‘The inciting incident’ – which express this entrapment through the doubling of consonants.

Narrative structure adds to the impression, by making escape impossible, in particular in the novella ‘Powdered Milk’, the length of which allows for some structural tampering. In this story, the occupants of the submarine base which becomes cut off from the surface world die off, one by one. The urgency of the situation when transmissions and supply drop-offs are discontinued is conveyed by numerous prolepses (‘Maddie would later find herself staring outwards […]. Back then, before, on the day the relay had failed, Eloise knocked back the first shot of the day’ (128)) while the crew’s impending death, their extinction as a species, which can, because of the slightly futuristic setting, be given an allegorical interpretation on the future of humanity, is expressed by the analeptic structure of the story as a whole. The opening, ‘”Another,” says Maddie, standing at the bank of windows, gripping her mug, her green mug the holy colour of grass, “another beautiful day”‘ is innocuous enough, until the reader realises at the end of the story, when the same sentence is repeated, that the character standing at the bottom of the black sea, holding her mug and peering into artificial lighting, is talking from a time after most of the crew has died, that the whole story is a flashback from the dead, a reminiscence from the sea where the dead lie. (123)

So the collection is also about the consequences and manipulations resulting from the way a story is told. It contains many narratives which are non-narratives, or ‘pre-narratives’. They take the shape of bullet-point lists, as in ‘Take care, I love you’, which presents a succession of numbered entries, all lifted from a Wikipedia article on the Fermi paradox on the existence of alien life, and which establishes an ironical dialogue between scientific attempts to explain the apparent absence aliens, and our own more prosaic alienation from each other:

5.13  They [the aliens] tend to isolate themselves
The last time you broke down and actually talked to your mum about how you feel all the time she said ‘where did I go wrong?’ (114)

Another story, ‘Jeff Goldblum’, features entries on the actor imagined in various places such as a launderette, or an empty auditorium in Alberta where he practices laughing backwards, or the bottom of the sea where he plays the piano. In ‘Six places where you have spoken’, the narrator speaks from a place of loneliness after ‘you’ has spoken, and what comes out is not story, context or words, but the mayhem, the impressions left by the painful blow of the words, which are captured in the similes deployed by the story (‘your voice, hard like a pair of paint-spattered overalls’ (25)) or the economy of this form, when words make sense through collision (‘and the nurse looked up with his teeth and he said, not long now’ (26)).

Several narratives exploit the shortness of the form in order to more generally reflect upon the nature of writing, by borrowing from the codes of other art forms, such as the cinema. ‘Folk Noir’ and ‘The language of heaven’ don’t present the readers with a story, but rather with a synopsis, which brings out the articulations and stereotypes of genres such as noir fiction, both in novel and in film, in short descriptive notations that establish context and stereotypical images expressed in non-stereotypical ways: ‘darkness dragged itself down the country lane like a wounded man’. (51) Other stories experiment with the technique of extreme slow motion (‘Nostalgia Tremens’), pan shots, close-ups, camera movements: ‘a silent documentary through a terrible place’. Cinematic genres are introduced: ‘romantic comedy’, with its ‘town of fake snow and empty streets circling around each other forever’ (75); the ‘silent documentary’; or even uncomfortable blends: ‘I was at last a romantic comedy about corruption and decay’. All the stories in Mayhem & Death have in common a concern with how stories are told: by borrowing from other art forms and languages, by paring down the telling process to its bare minimum, and by using ekphrasis, and the evocative power of language to lend life to pictures.

Claude Pujade describes the short story as ‘a literature of discomfort’. Mayhem & Death does not seek to evade this characteristic, but more importantly, it is a collection that does not let comfort and complacency about our world take over. It is a book ‘for the lost’, as the epigraph to the novella points out, but in the shape of a warning, a wake-up call to all of us not to let the world flounder. Behind the dark fairy tale scenery and atemporality, behind the dangerous magic and the power of storytelling, there is, though unobtrusive and allusive only, the very real concern with fracking, Brexit, communication through so called ‘social’ media, and ‘exploded identities’ as McClory puts it herself. The story ‘A charm for the world as it is’ is an anaphoric incantation not to let the human down, because it is what bonds us together. So it is only fair that the last words should go to it:

Or maybe not. Maybe flash fiction deserves a flash review. So here it is: bloody good.

‘Adventure to the Adventurous’: Naomi Mitchison’s Travel Narrative ‘Mucking Around’

Adventure to the Adventurous ‘And when I got there I found that after all I wasn’t really a white any longer. I am dangled between two worlds.’ — Naomi Mitchison, Correspondence, NLS Acc 10888 In her late seventies, Naomi Mitchison published three volumes of autobiography: Small Talk: Memoirs of an Edwardian Childhood (1973), All Change Here: Girlhood and […]