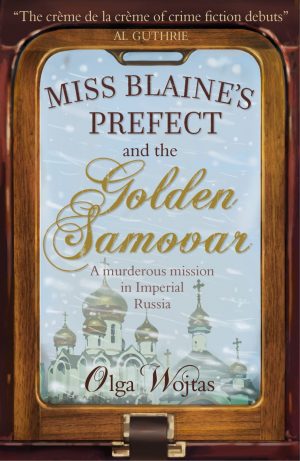 Miss Blaine’s Prefect and the Golden Samovar was published to coincide with the centenary of the birth of The Prime of Miss Jean Brodie by Muriel Spark, but don’t let anyone tell Wojtas’ protagonist that!

Fifty-something Shona Ferguson is a member of the crème de la crème, as she likes to remind the reader from time to time: ‘I explained that, thanks to the finest education in the world, I had a good understanding of the basic principles of quantum physics’ (22). Having attended the Marcia Blaine School for Girls – made infamous in Spark’s 1961 novel – our protagonist harbours a vendetta against ‘that book’ for ruining the reputation of her alma mater: ‘That book purports to be about my school, but never has a school been so traduced under the veil of fiction. It is nothing but a distortion, a travesty, a betrayal.’ (19–20).

In her attempt to set things right, the Morningside librarian hides copies of The Prime of Miss Jean Brodie whenever possible to ensure that no one else will be tricked into thinking that her school could ever produce teachers or pupils who didn’t meet its exacting standards. She is understandably surprised when the school’s two-hundred-year-old founder unexpectedly turns up and requests a copy of the book. When she passes the test by refusing to give Miss Blaine a copy, Shona is taken into her confidence and tasked with a mission to travel back in time to nineteenth-century imperial Russia.

And so begins a whirlwind adventure to complete the task given to her by Miss Blaine and ‘to make the world a better place’ (22), one of the chief aims of a Blaine education. As the novel develops, we soon learn that her instruction at Marcia Blaine’s School for Girls really has been world-class. Shona excels at everything from Scottish dancing to languages, music, history, physics and dagger-throwing. There is, however, one rather serious flaw to her successfully completing the task and impressing her the founder herself – she doesn’t know exactly what the mission is. Some hilarious hijinks thus ensue in which the reader, much to his or her satisfaction, is always one step ahead of the know-it-all Princess Shona Fergusnovna (as she comes to be known in the upper echelons of Russian society) while she tries to figure it all out.

The story begins with Shona crashing a rather lacklustre ball held by the beautiful Lidia Ivanovna. To shake up the room a little, she teaches the society men and women some Scottish dancing. While she is demonstrating reels, the Gay Gordon and Strip the Willow, she spies the handsome and mysterious Sasha across the room and realises that her task is to bring her hostess and this young man together. But as the attempts on her own life increase, and the bodies of rich older women begin piling up, has Shona perhaps got it all wrong?

Although the several Scottish references – sometimes inserted with a crowbar-like effect – and mentions of the Marcia Blaine School for Girls do become slightly repetitive over time, this is nevertheless a fantastically fun comedy caper written by a playful and witty author. Old Vatrushkin (actually young Vatrushkin, if we go by age) is akin to a character from a P. G. Wodehouse novel whose long-suffering attempts to set the record straight are amusingly ignored by our protagonist. Another favourite is the sullen maid who Shona inadvertently acquires from the countess: ‘None of us could stand her. When she was a baby, I left her on the steps of the convent. After a week, the nuns brought her back. They said if I tried it again, they’d get the priest to excommunicate me.’ (179)

Brought up in Edinburgh, Wojtas attended James Gillespie’s High School – Spark’s model for the Marcia Blaine School for Girls. She has published several short stories and was awarded the Scottish book Trust New Writers Award in 2015. In this, her debut novel, she has created a fast-paced and thrilling tale full of time travel, matchmaking, dastardly deeds and mayhem. Marcia Blaine’s Prefect and the Golden Samovar has several moments of comedy genius and, on the whole, the author builds the tension to a fittingly chaotic and satisfying conclusion. The fact that the reader can see the end coming a mile away is far from a criticism. Although not an entirely smooth ride throughout, the sheer hilarity of the plot will have even the most serious Marcia Blaine alumna chuckling their way to the end.

Miss Blaine’s Prefect and the Golden Samovar by Olga Wojtas is published by Contraband/Saraband, 2018.

Two anecdotes. Firstly, when completing an MPhil dissertation on Muriel Spark (1918-2006) in the late 1980s, I happened to be in my parents’ house one day with several of Spark’s books which I had on the dining table. Later that afternoon I overheard a friend of my father’s (similar stamp to pater: left-wing trade unionist) […]

From Page To Screen: The Strange Case of ‘The Driver’s Seat’

In most people’s lists of the best film adaptation of a Scottish novel, the 1969 version of Muriel Spark’s The Prime Of Miss Jean Brodie would deservedly be near the top, with a pre-damehood Maggie Smith winning the Academy Award for Best Actress for her portrayal of the title character. However, while that film has […]

One of the many delights of a Muriel Spark novel is the way in which the ground shifts so delicately under the reader’s feet. Memento Mori begins as a mystery: who is victimising elderly people by making anonymous phone calls suggesting that they remember they must die? A detective is consulted, and duly tries to […]