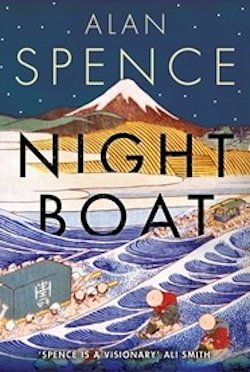 In April 2018 it was announced I was to receive a prestigious award from the government of Japan — the Order of the Rising Sun. I was nominated for the award by the present Consul General in Edinburgh, Mr Daisuke Matsunaga, and I was both touched and honoured. The citation mentioned my haiku poetry and other writings, ‘promoting an understanding of Japanese culture’ and a ‘bond of goodwill between Japan and Scotland’.

So how did all of this come about? Why the fascination with Japan?

I have a memory from the late 1960s, when I was about twenty. I’d come through to Edinburgh from Glasgow at Festival time, and I was wandering round a photographic exhibition when one particular image stopped me dead. It was a black-and-white print, a photo of Mount Fuji with two figures in the foreground, Zen monks, black-robed, heads bowed. I caught my breath, felt as if I had been struck in the chest. What I felt, in a way I couldn’t begin to understand, was a feeling of recognition, a sense of familiarity. This was something I knew.

Fast-forward forty-odd years, and I found myself physically in Japan, practically in the shadow of Mount Fuji. I was in the small town of Hara, near Numazu — one of Hokusai’s Views of Mount Fuji is from almost this exact spot. (It’s almost unchanged, apart from the industrial sprawl in the foreground!) I was visiting the small temple of Zuisenji, founded by Zen master Hakuin in the eighteenth century. I was researching my novel Night Boat, based on Hakuin’s life, and I felt I had to visit the temple, feel its atmosphere. I sat in front of a little carving of Hakuin — one I’d heard described as ferocious (dark wood but with the eyes white — staring, intense). But in addition to that intensity, I felt an overwhelming sense of stillness and peace, a feeling of being blessed, of coming home.

In between these two experiences I had visited Japan half a dozen times, usually with my teacher Sri Chinmoy. His background was actually Hindu — a different tradition entirely — but he loved Japan and its culture. So each visit was a kind of pilgrimage, a spiritual journey. We visited Tokyo and Kyoto, Hiroshima and Nagasaki, Fukuoka and the island of Okinawa. One place we went to on every trip was Kamakura, home of the Daibutsu, the great bronze statue of the Buddha, which Sri Chinmoy said was the embodiment of compassion:

kamakura buddha
my back straightens
of itself

I’ve been writing haiku since 1968, and not surprisingly, I’ve written a few on each trip to Japan. I include a few of them throughout this piece as these little moments, distilled to an essence, best sum up what I feel about the place:

jetlagged in japan —
forgetting, remembering
who I am

And it’s the spiritual qualities of Japan that draw me back — that spareness, awareness of beauty, the exquisite aesthetic sense, clarity of insight expressed in a three-line poem, a briskly-executed brush drawing, a richly satisfying piece of pottery. It’s a grain, a texture. It’s there in the films of Kurosawa and Ozu, a heightened sense of being in the moment, and the transience of that moment, its fleetingness, impermanence.

So far, so zen. But of course there are many aspects to Japan, richly complex in its modernity — manga and anime, the dazzling neon Bladerunner cyberdream of Shinjuku — and there is the sheer brutalism displayed in a kind of anti-environmentalism, destroying areas of natural beauty, paving paradise, oblivious. That industrial sprawl I mentioned, at the foot of Fuji, runs the length of the country, linking one major city with the next. Alex Kerr, in his wonderful study Lost Japan, bemoans the loss (with the insight and depth of one who has lived in the country for almost fifty years, and seen the inexorable pace of the changes): ‘If you think it’s not there, it is. If you think it’s there, it isn’t.’ And remarkably, he ends on an entirely positive note, observing that Japan is  moving into yet another phase of reinvention, its writers and artists engendering a palpable sense of excitement.

If you think it’s not there, it is.

up there between
neon skyscrapers
the dazzling moon

a vision of hell?
doors open, the roar
of pachinko

This too, this too.

On that trip my wife and I also managed to see a little of rural Japan, near Gifu (though the six-lane highways were never far away):

breathing the air
of japan – woodsmoke
on an autumn evening

Staying just ahead
of us, all the way
up the river,
two heron take flight
again and again.

She breaks off
from tending her garden,
runs after us to warn
there are bears
in the woods.

That last one brings is something that always impresses me — the sheer kindness and hospitality of ordinary Japanese folk towards strangers. You ask directions in the street, they’ll go a quarter of a mile out of their way to take you where you want to go. You’re wandering past some houses at the edge of town, upstream towards a wooded area, and an old woman comes out of her garden and hurries after you, explaining in Japanese (with much mime) that you should beware of the bears. (There has just been a bear-warning on local radio!)

Some of my trips to Japan have been to research the novels I was working on. First there was The Pure Land, based on the life of Thomas Blake Glover, Fraserburgh-born merchant, adventurer, freebooter, who went to Japan in the nineteenth century. By a nice piece of synchronicity, Glover was one of the first ever gaijin or foreigners to be awarded the Order of the Rising Sun. Next was Night Boat, mentioned earlier, inspired by Hakuin, the radical hugely influential Zen teacher. Now I’m working on Mister Timeless Blyth, invoking R.H. Blyth whose books on Zen and haiku opened up worlds for me — he went to Japan in the 1930s and, among other things helped write the Emperor’s surrender speech at the end of World War II:

In the autumn rain
at Tokeiji temple,
looking for
Blyth’s grave
and not finding it.

After Night Boat was published, I was invited to speak at a forum on Hakuin in Tokyo, in the context of a huge exhibition of Hakuin’s paintings at the funky Bunkamura gallery in downtown Shibuya. I gave my talk in English and it had been pre-translated into Japanese and was projected on the wall behind me as I spoke. I shared the stage with a bona fide Zen master — tough, wry, poised, humorous — and there were a number of Zen monks in the audience. In its way it was dreamlike but also matter-of-fact. Again, somehow, I felt at home.

On my most recent trip — to research the Blyth book — my wife and I stayed for a few days in Kyoto, in beautiful Arashiyama, at an empty Zen temple, as guests of  the monk who looked after the place — an American who had lived in Japan since the 1960s. He raked the stone garden, swept up the leaves:

Autumn sunshine —
the old monk grins.
See one Zen temple,
he says, you’ve
seen them all.

I’m writing this in the little bookshop that is also my office. Diverted Edinburgh traffic rumbles past the door. I’ve lit a stick of Japanese incense — the fragrance is called haiku! I’m drinking a cup of green tea from the 300-year-old Ippodo teashop in Kyoto. I’m listening to a CD of a recording made in the 1960s, Music for Zen Meditation by jazz clarinettist Tony Scott, with Japanese musicians on koto and shakuhachi. Framed in the door of the shop is Arthur’s Seat, catching the afternoon light, looking for all the world like a wee scaled-down Fuji in a woodblock print.

Japan is a state of mind.

Travels with a Tree

We travelled north from London together on the Caledonian Sleeper. The tree got the upper bunk, I had the lower one. It had been a long journey for the tree, from Nagasaki, bearing its passport: a phytosanitary certificate that gave it a clean bill of health. I’d first heard about the tree, a kaki tree, […]