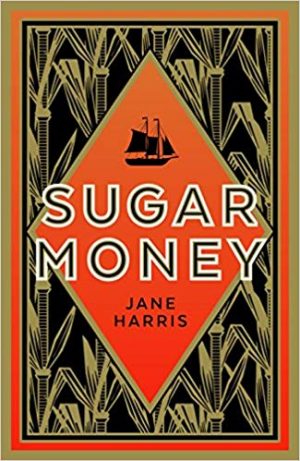 In 1765 a French monk called Father Cléophas resolved to persuade forty-two enslaved people on the Island of Grenada to desert their British oppressors and return with him to Martinique. Cléophas was a member of the Brothers of Charity of the Order of St John of God, but he was not motivated by a desire to help the slaves gain their freedom. Cléophas wanted them for backbreaking work on indigo and sugar plantations owned by his order; profits from which funded the Brothers’ hospital and other charitable works. British authorities on Granada discovered Father Cléophas’ plan and expelled him, but the monk was determined. He hired a young slave from Dominican Friars in Martinique and ordered him to carry out the mission.

Jane Harris’ novel Sugar Money reimagines the episode through the eyes of Lucien, much younger brother to Emile, the man charged with the dangerous task of persuading the slaves to escape under the noses of the British.

Scotland has been slow to acknowledge its enthusiastic involvement in the North Atlantic slave trade and the resulting profits which transformed the (barely) developing country into a centre of the Enlightenment and ultimately a powerhouse of industry. Art and literature have been key in bringing the history to a wider audience. Maud Sulter’s photographic montages, Jackie Kay’s play Lamplighter, James Robertson’s novel Joseph Knight and artists Graham Fagen’s Slave’s Lament and Alberta Whittle’s Sorry for What: I am not the sugar in your cup of tea and Planter’s Punch are amongst a growing body of work exploring the subject.

Sugar Money acknowledges that the trade was international. The Friars are French, the English (les Goddams) in charge of Grenada, but Scotland is continually present in the names of overseers, soldiers and plantation owners: their histories, songs and accents. Lucien loves ‘stories of Old Caledonia’, he knows about the ‘mighty battle of Culloden’ and rightly fears the regiment of Glasgow Greys billeted on Grenada.

It is not possible to calculate the sum of humiliation, pain, misery and death inflicted by slavery. Writers and artists engaging with the topic must grapple with the question of how to evoke the enormity of the system, its agonies and degradations, without resorting to torture porn or a numbing catalogue of outrages. Lucien is Jane Harris’ equivalent of the small girl in the red coat moving through the Warsaw Ghetto at the start of Schindler’s List. He is the individual who provokes empathy where the monstrousness of the system might be in danger of prompting us to look away.

Sugar Money is underpinned by historical and experiential research. As well as immersing herself in archives in Granada, Paris, Kew and Glasgow’s Mitchel Library, Harris hiked across Grenada, following the same route her characters take. Her first-hand experience and Lucien’s need to be constantly on the alert for human predators, results in vivid descriptions: ‘[…]the stars came out and bathed everything in silvery light. Some nights in those Antilles are so clear that – even with no moon – the heavens shine bright enough that you can see your own shadow. All around us, the sound of a million million insects and creatures assaulted my ears.’

Jane Harris recognises a debt to Robert Louis Stevenson in her acknowledgements and she has achieved an ambition of every writer in thrall to him – a book with maps for endpapers and more maps inside. Sugar Money begins like an adventure story. Young Lucien is tethering the cows when the summons to embark on his quest projects him from childhood. He and Emile sail from Martinique to Dominica on a ship christened The Daisy, captained by Bianco, a drunken, but kind(ish) Englishman. Their passage recalls Treasure Island. There are echoes of Kidnapped, too, in the brothers’ journey across Dominica, though Emile is too serious to stand in for the vainglorious Alan Breck Stuart.

Lucien can barely read, but it seems he may also be a fan of Stevenson. Trying to overcome his fear he imagines ‘[…] scenes in which we two brothers – somehow armed with cutlass and musket – fought skirmishes with redcoat soldiers along the carnage at Fort Royal. Having vanquish our foes, we freed all the slaves in town then led them aboard a galleon, firing cannon at the fort as we sail to safety.’

The atmosphere of adventure that opens the novel seems at first to be in danger of setting too jaunty a tone for a book inspired by actual events in the history of slavery. But as Sugar Money progresses, some of the iniquities of the plantation system come into focus: women are raped, ears nailed to walls, hands amputated, ankles shackled, necks collared, mouths shat in and taped shut, minds lost. Stevenson is here, too, in the darker guise of The Beach at Falesá and The Ebb Tide; the writer who helped inspire Joseph Conrad’s Heart of Darkness.

Words on the page do not inflict actual wounds, and travelling roads taken by historical characters does not mean that we have walked with their unshod feet, but Lucien is an honourable, likeable youth whose innocence does not belie exposure to brutality. When his back is revealed to be ‘ridged with an island of scars, a map of tyranny’ it is as if Jack Hawkins or David Balfour has been subjected to torture. What started as an adventure story turns deadly earnest.

Blood runs thick and thin in Sugar Money. The brothers’ father, a recently deceased (un)Charitable Brother, preyed on their mother. Like all progeny of enslaved women Emile and Lucien were born into slavery. Despite a system that guards its strength by routinely dividing families, the brothers’ love for each other persists. But love and purity are no match for institutionalised slavery.

Adventure stories for boys (& others) rely on central protagonists who readers inhabit. We experience their trials from the safety of armchairs and laundered beds, reassured that however perilous their journey, the conventions of the genre guarantee our hero’s survival. Jane Harris’ decision to combine a Stevensonian quest with actual brutalities of slavery is risky. Like oil and water they cannot mix. And this is why the novel works. However clever, however good, however winning or beloved Lucien is, there are no guarantees of happy outcomes for him. And so we go with him, to the un-guessable final page.

Sugar Money by Jane Harris is published by Faber & Faber, 2017.