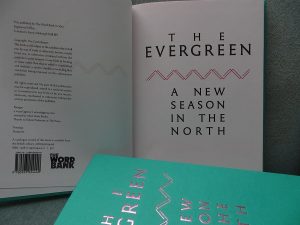 The first issue of The Evergreen carried an Introduction suggesting the recent flourish of community activism begged the questions: What kind of places do we want to live in? And what are we prepared to do about it?

This third issue goes some way towards offering answers by highlighting what isn’t appreciated, from an inert council who has stoked a planning war by pursuing aggressive development against the wishes of its citizens, to the world of big data and digital surveillance. In his Introduction, Sean Bradley says:

Today the beauty of the city, and the future of its living heart, are being sacrificed to tourism and its inexorable growth directed by market forces alone. The art of planning is no more; the role of the town planner now is one of unquestioning bureaucratic support for the agenda of inward investment.

And he cites an earlier example of council narrow-mindedness masked as Progress: the 1949 plan to drive motorways through the centre of Edinburgh, recommending the council rededicate itself to the preservation of those aspects of the city that mark its uniqueness and respect its traditions as well as its history.

If this suggests Patrick Geddes’ legacy, they also suggest the new Geddes Centre at Riddle’s Court in the Lawnmarket presents a golden opportunity ‘to awaken a critical reassessment of the Geddes legacy with “folk” to the heart of urban planning’.

Handsomely produced, these hardback anthologies are inspired by the four issues Patrick Geddes and colleagues published from Riddle’s Court. Their inspiration and title came from Allan Ramsay’s 1724 anthology, The Ever Green. And like their predecessors there’s an energetic mix of poems and short fiction, travel, local history, town planning, reminiscence and community art from twenty contributors

Astrid Jaekel’s ‘Behind the Scenery’ explores life in a world heritage site by recording Old Town residents’ relationship with the place: ‘You’re just like my wife,’ she was told. ‘She was incurably nosy about other people’s houses.’

It’s a picture of loss rather than change, a negligence that is felt in communities across the country, but seems particularly acute here: ‘Most of these flats here are sort of weekend renting or just a few days renting, they come and they go. There’s only a handful of full time residents. And then even some of the ones that you think are full time residents will go and work abroad or something, and while they’re away someone else will come along.’

Women carry tin baths and push prams filled with washing or sit smoking on the steps with the Castle as a backdrop, a small group watch a juggler keep five Indian clubs in the air while a couple argue in an upstairs flat.

None of these Old Town residents would remember Scone Nose, Curdy Glen, Soor Yill, Apple Glory, Coconut Tam or Register Rachel, bit players in Donald Campbell’s essay on ‘The World of Ned Holt’. Ned was an actor, best known for his performances as Hamlet at Connor’s Penny Gaff in Blackfriar’s Wynd, but remembered as an artist who drew ‘every kind of character he saw – street traders, entertainers, criminals, beggars and personalities whose stories have entered Edinburgh folklore’.

From his home in White Horse Close, Ned completed almost sixty studies from life, the memory of others or his imagination, and most are in the custody of the City of Edinburgh Museums.

He was a teenager when Burke and Hare were doing their level worst and would almost certainly have known them, at least by sight. He painted the victims, Daft Jamie and an unsigned portrait of Mary Paterson has been attributed to Ned, along with Mrs Hare and Burke’s mistress and co-defendant Helen MacDougall — as far as I know, no relation.

Donald has written poems to accompany Ned’s pictures and sums up the collection’s importance: ‘Edinburgh people take their identity from the Old Town – it is the psychological centre of our city. We are often described in terms of fallacious clichés – we are supposed to be sedate, stuffy, small-minded and humourless. The art of Ned Holt reinforces our true sense of identity, for the world of Ned Holt is one in which all Edinburgh people can find a place – because they know they have lived there.’

Some pieces are difficult to categorise and one of two go out of their way to defy categorisation. Lee Randall’s ‘Coming to Terms With Nature’ describes how an inveterate city dweller learned to love Edinburgh’s greenery, though her piece could have borrowed the final sentence of Michael Romer’s ‘Notes From a Wine Cellar’: ‘Edinburgh is a honeycomb of surprise’, he concludes, describing the destructive effect mortar strengthened with horsehair had on modern drills.

As President of Scottish PEN, I am very familiar with the work of Nik Williams. He is our policy advisor and ‘Where Do I End?’ takes us far beyond our local community and towards big data, a world without end. ‘Data’, he says, ‘underpins our society, and never before have we constructed a world on such broad but mysterious foundations’.

It is a world that seldom stands still, where information is sold and investigated, a ‘hidden world, inhabited by numerous and unaccountable versions of ourselves […] obscured from view but […] ever-present. We cannot prove where it is because we cannot really prove where it isn’t.’

Nik conducts data school workshops, using his own digital footprint with surprising results from those whose early experiences may have started in the playground. And as our society learns how to respond to big data, children seem more vulnerable, particularly when consumer tracking by an American superstore branch revealed a teenager’s pregnancy to her family by running her purchases against their pregnancy prediction score that correlates items such as vitamin supplements and unscented lotions.

The Evergreen 3 edited by Sean Bradly is published by Word Bank, 2017.