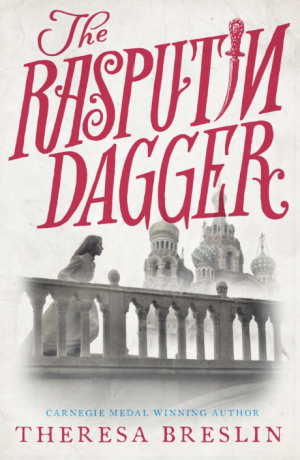 In The Rasputin Dagger, award-winning author Theresa Breslin returns with an epic tale of love, friendship and loss set against the backdrop of the Russian revolution. With a care for historical detail and accuracy evidenced by her other books such as The Medici Seal and Remembrance, Breslin’s skill for evoking the details of everyday life through the eyes of Nina who, like us, is seeing Petrograd (St Petersburg) for the very first time brings to life the tension and fear permeating the kitchens, streets and universities of a city on the brink of revolt. Rather than shying away from a topic that many might view as difficult for young people, Breslin’s painstaking research carefully and sympathetically depicts real historical events. Her careful treatment of potentially disturbing events also makes this a great text to be used in schools and to provide a route into further study of the world-altering events of 1917.

The novel opens in 1905 with the events of ‘Bloody Sunday’. Stefan Kolodin, a child at the time, is caught up in the chaos as the imperial guard fire upon unarmed demonstrators marching towards the Winter Palace. Twelve years later, still haunted by the events of that day, he has grown into an idealistic young medical student who detests the imperial family and believes that Russia will never be free until they have escaped the ruinous clutches of the Romanovs.

Nina Ivanovna has spent her eighteen years of life in a secluded village in Siberia, following her father around the countryside gathering and chronicling the folk tales told by the local community, far away from the political upheaval of Petrograd. When her father dies, leaving her at the mercy of the greedy family lawyer, she has no choice but to flee her home. She carries with her the ruby-studded dagger left to her, and the memory of her father’s dying words that she must never leave the tiny village where she has grown up.

When Nina and Stefan meet, it is in a city facing the horrors of war and political upheaval, but it is not only the threat of revolution that poses a danger to them in the vast and ever-changing Petrograd. The dagger she carries matches the one carried by Grigory Rasputin, the monk with dangerous ties to the Tsarina and the Romanov heir. As the political climate becomes ever more fraught with danger, they are drawn against their will into a revolt that will change them both, and the country, forever.

The lush descriptions of life in Petrograd during the First World War wonderfully evoke a powder-keg in which extreme poverty is juxtaposed by the wealth of the imperial family. While the Romanovs live in surroundings of ‘golden paint and wallpaper, gold ornaments, with heavily gilded furniture’ (154), the ‘women of the bread queue must be at the bakery before five a.m. and wait for hours to obtain the most meagre loaf’ (181). For the poor, the harsh Russian winter threatens starvation while their loved ones are slaughtered on the battlefields. The growing tension is palpable to the reader as the events of 1917 are depicted through the everyday lives of normal, relatable people. The human cost of war and revolution are at the forefront of this novel, and the author also treats the imprisonment and eventual murder of the Romanovs in the same way. We, as readers, are invited to sympathise with the tragedy of their last moments together and to view them as a family rather than as rulers.

A key theme running throughout this text is the treatment of the rich tapestry of Russian folk tales. Nina uses these stories to calm the sickly Romanov heir, and this is what initially draws her into their world. In a country on the brink of collapse, the stories represent and tie into a Russian identity and cultural heritage that seems to be ephemeral and ever-changing in a world of changing loyalties and politics. As the young Tsarevich is led away to his fate, he asks ‘in the stories of Masha and the bear, does the bear represent Russia?’ (377).

Although there is also the legend of the eponymous Rasputin dagger itself, the plot of the novel is not centred around this potentially cursed object. It works well as a method of bringing the enigmatic monk and Nina together, and as a way of finding out about the secrets in Nina’s own past, but as a reader I was relieved that it did not hold too much sway over the characters or events of the novel. The strength of this novel is in the development of its characters, set against the backdrop of the revolution. At its heart, it is a novel about families, and that is where both its strength and tragedy lie.

In The Rasputin Dagger, Theresa Breslin has brought the people, politics, joy, sorrow and desperation of a moment in time to life. This is an epic tale of love, friendship and revolution which navigates seamlessly through one of the most turbulent periods of history, and it is a book that lingers long after the final page has been turned.

The Rasputin Dagger by Theresa Breslin is published by Corgi/Penguin, 2017.

In book blurbs and on my website I acknowledge the land of my birth, Scotland, both personal and national, as a major influence on my work. Hearing first voices—primary voices—means that I am ‘informed by Scotland’ and thus as a writer ‘formed’ by its people, culture, geography, history, landscape and literature. Born in the middle […]