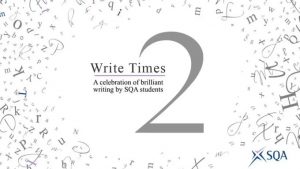 Write Times 2, published in February, celebrates ‘brilliant writing by SQA students’. It anthologises fiction, poetry, non-fiction and drama which has been produced by candidates as part the SQA’s examination processes in the academic year 2016–17. We have been here before, of course. Its precursor, Write Times, arrived in 2007 with similar aspirations. But that was a world away then; or at least was the product of a bygone curriculum (Standard Grade, Intermediate 2 … they’ve been shown the door, they’re not welcome any more). So what to make of this sequel?

Superficial points first. Like its precursor, each section is introduced by a literary personality, and the writing is drawn from all parts of Scotland, and from different ‘levels’ – here ranging from Level 3 to Advanced Higher. Unlike its precursor, the writing is bookended by our political leaders: the Deputy First Minister introduces the work, as Education Secretary, and the First Minister closes with her own congratulations. Also unlike its predecessor, pictures of the authors are included; and a perfunctory search on the internet will yield pictures of the book’s launch, and video clips of some of the students reading their pieces. It’s hard to avoid the conclusion that PR promotion has made many strides in the intervening decade (though the inclusion of short comments on the origins of the pieces is a mixed blessing – more strides required here, perhaps). But, without disregarding a feeling of O tempora, o mores completely, we knew that anyway, didn’t we? So what of the writing itself?

It would be churlish indeed to question the sincerity of the pieces anthologised: some of the pieces are achingly honest and give a real sense of the personalities and lives behind the words (and this transcends the ‘level labels’ in a deeply encouraging way); some are deeply rooted, and grounded in a particular place and culture, be it the bogland of Islay or the dusty heat of Kenya. And some pieces display sophistication and skill surely beyond the years of their writers: a girl in Pompeii worries about her family’s future, but finds solace in her garden; inspiration – a word not to be used loosely – is found in the statue of La Pasionaria; the ‘quiet fortitude’ of introversion is wittily celebrated and extolled. A brief glance at the footnotes and bibliographies provided confirms a real sense of diversity. Influences cited range from South American literary giants to Baudelaire, from traditional Chinese painting to TED talks on design. And the subjects chosen range widely too – from war-torn Aleppo to questions of gender identity, from leaving home for good to returning for a funeral. All of which would confirm Jackie Kay’s description of young writers ‘stepping out of their own shoes and imagining the lives of others’ in her introduction to the Poetry section.

However, with these undoubted strengths also come some entries on the debit side. In the Fiction section, variety is mainly to be found in the range of literary and structural devices employed, rather than in the multiplicity of possible narrative voices; it’s a revealing detail that there seems disproportionately little attention to the varieties of Scots used by so many of our young people. To take this negative argument a little further, it’s interesting to ponder content-wise what is noticeable here by its absence: nothing on trolling or the ubiquitous smart phone, one piece only on social media(!), and a general absence of most of the discussion topics found in youth parliaments, teenage websites, vlogger or bloggers. Of course, hard-bitten SQA Writing markers might reply that an absence of discussion of Size Zero social trending, or the loopier conspiracy theories to be found on the internet’s stranger margins, would be no bad thing. But some pretty familiar writing topics do make an appearance, so it’s not as if they’ve all been ruled out on those grounds. It’s hard to resist the feeling that there’s a little slant to the editorial approach here.

And what might this be? Well, the clue perhaps is to be found in the First Minister’s praise of the confidence of our young writers. In our world where we are all striving for excellence, it is a key factor. And rightly so – for too long a stereotype feature of being Scottish was held to be that so-called cringe in the face of suave speakers from other cultures. But in our own small country, within the bounds of our own classrooms, it is easy to forget that there are many varieties of confidence – including the kind which tries to avoid ticking all the boxes, which doesn’t quite accept the status quo, which questions and challenges. While there is much to admire in this collection, it’s a source of slight disappointment that some kinds of excellence seem promoted more than others.

Scots Word of the Season: ‘Wean’

wean n. a child, especially a young one Scots has a number of words for children and young people, the most well-known being bairn and wean. While bairn is traditionally associated with dialects of the north and east of Scotland, wean is more often found in the south and west, and both terms occasionally appear in northern English dialects, reminding us of the fluidity of […]