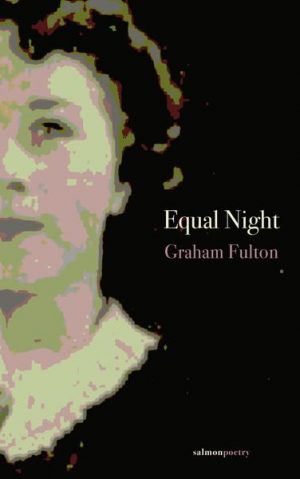 Considered side by side, Fulton’s 2017 collection dealing with the illness and death of his mother, Equal Night, and his latest collection, Circulation, look a little at first like the masks of Sock and Buskin. The former is strongly elegiac whereas the latter, like the title suggests, is about creative blood and playfulness beginning to flow once again after a period of funereal pallor. This is not to say that Equal Night is exclusively tragic and Circulation wholly comic – Fulton is too much of a seasoned professional (with some thirty-plus publication credits to his name) to allow his collections to strike one monotonous note.

That said, the emotional depth and tenor of Equal Night marks a departure from Fulton’s distinctively wry and witty approach of observing and recording absurdities in everyday life. Fulton is no longer commenting on strangers, but turning all his attention to his mother in her last months on earth and the immediate aftermath of her death. There are still plenty moments of gallows humour and dark absurdism to be found here, but they are often of a more piercing and bitter kind than is found in Fulton’s other collections:

In the car on the road to the cemetery gate.

We’ve picked you up from the undertake shop.
A plastic maroon-coloured urn’s on my lap,
the colour of Heart of Midlothian’s strip.
A numbered sticker’s been slapped on the lid.
You’ve changed to flakes of Scott’s Porage Oats –
you’d laugh if you could see yourself.

As the speaker in ‘Sack Race’ openly admits, we must laugh ‘to stop ourselves going mad’. Years ago, I volunteered at the editorial offices of a literary magazine and the chief editor’s primary bugbear was poems about holidays and poems about hospitals. I saw where they were coming from about superficial ‘holiday snap’ poems, but surely all poems and poets end up in the hospital. It is such an inherently sterile and mechanical place that it cries out for the music and eloquence of poetry. Like Fulton’s mentor, Tom Leonard, has said of these poems, they have the hallmark of ‘genuine necessary art’. In ‘Changing Room’ we see how the health system has the power to de-humanise people as well as the poet capturing vividly a person hovering in the interstice between life and death:

[…] You’re turning to air […]
Your face in the mirror is vagued by steam.
You rub a small hole to check you’re still there.

Divided into three sections, or movements, Equal Night deals with the poet’s mother’s cancer diagnosis, her illness and death, and then her funeral and its repercussions. What is perhaps most remarkable about these poems is not so much the acute, poignant and clearly loving attitude to poet has towards his mother and her demise, but rather his ability to see things analytically, to show us how our bodies are processed in such a clinical and cynical way. Fulton’s dealings with apathetic undertakers who wait for ‘the next wee job’ (‘Services Rendered’) and put on a ‘feast / of retro sandwiches’ (‘Received’) shows us that R.I.P has become R.R.P, like the biography of Robert Mitchum that the poet’s mother was reading, unfinished, on her death bed: ‘A pressy for Christmas, less than a year. / Somebody dead to read all about.’ (‘Full Stop’). It is too glib and pat to say that these poems are a vital part of the healing process for Fulton, but they do mark his movement through the underworlds and death-zones of illness and bereavement in striking and memorable ways. There is also a sense that the poet comes out the other side with the solace of memories and an unsinkable ability to see humour and beauty in daily events, such as those recounted in ‘Precious’:

I remember, suddenly, the gold stain
that appeared on a summer’s evening
on the brand new rug that you loved.

And we scrubbed, rubbed and hammered
with suds and water […]
it had only been a patch of sun, only
a leaf of light, a trick, and we laughed,
and it was never ours to destroy or create.

While a death in the family, although it happens to us all, represents something of a terra incognita, Circulation, Fulton’s latest collection, marks a return to the poet’s familiar terrain and characters of his home town of Paisley. I’ve written in a previous review of a Fulton collection that he should have the title of ‘Makar’ of Paisley’s bampots, but Circulation has made me reassess this claim. While Fulton certainly can send up others, there is an underlying affection to his writing, and he is never looking down on the people who give him the amazingly whacky utterances and soundbites that spark his poems. Fulton certainly is the chiel amang us, takin’ notes, and he has the temerity to write them up and print them, but I get the impression he relishes life in Paisley for all of its absurdities and surreal moments. ‘Counter Intelligence’ is one of the many poems here, like the title poem ‘Circulation’, in an urban demotic Scots and presented as a monologue of a character, and here the speaker is trying to buy a packet of cigarettes and instructing the shop owner to:

Similarly in ‘Circulation’ the speaker makes us laugh by condemning themselves with their own mouth:

they must think
am a fuckin numpty.

Before you think that Fulton is presenting us with a freak show for our own judgemental amusement, it should be pointed out that Fulton is one of the major eccentrics to feature in these poems. In ‘Walking in the Park Pretending I’m Blind’ we are given the image of the speaker, a grown man, playing a game from their childhood where they pretend to be blind; and in ‘A Paper Clip in My Scrambled Egg’ we are treated to a master-class in self-deprecating mock-heroics:

I’ve just found a paper clip
in my scrambled egg.

It was hidden
beneath a layer
of fluffy goodness
and must have been put there
by my wife
who’s determined
to get her hands in
the billions milked
from my evil poetry empire.

I admire how no-one is sacred in Fulton’s poetry, and while his tone can be sardonic, it is also invariably sympathetic. In ‘The Mike and Eddie Show’ the speaker finds himself at the Free Verse Poetry Book Fair in London and spots in the room the veteran poets Eddie Linden and Michael Horovitz. I too have been treated to an impromptu rendition of Eddie Linden’s ‘pacifist-atheist-lapsed-Catholic-/homosexual-octogenarian-/Scots-Irish-alcoholic-communist’ poetry, so I laughed when the poem ends with Linden, having walked around the room multiple times ‘looking’:

for someone’s ears
to spurt his poetry into
which just happen to be mine.

Here Fulton is not only gently mocking Linden, he is also saying he too is the proud member of a band of misfits, all gathered together to celebrate poetry. Fulton’s poetry is often celebratory and life affirming, even at its most satirical, and Circulation forcefully marks a return to form after the crushing blow of the loss of his mother, dealt with so movingly in Equal Night. There is always a risk, as with Robert Garioch’s poetry, that too much emphasis is placed on the humorous aspects of a poet’s work and the poet is typecast as a result, but together Equal Night and Circulation are proof of a relevant, resilient and versatile voice at work on the fringes and centres of society. Fulton has done here what he’s always done and what he will go on doing:

dissecting what is always there,
if you have the desire to see

(from ‘The Woman with the Wonky Eye’)