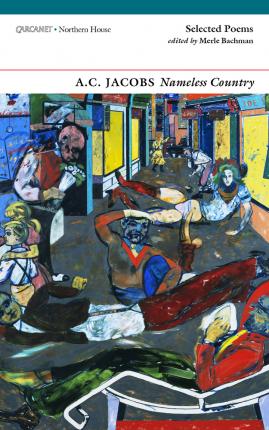 The blurb of Nameless Country states that Arthur ‘A. C.’ Jacobs was ‘a Jew in Scotland, […] a Scot in England, and [..] a diaspora Jew in Israel, Italy, Spain and the UK.’ Born in 1937 to Orthodox Jewish Lithuanian parents in the Gorbals, Jacobs spent much of his adult life travelling. The complex, intersectional cultural identity ascribed to the poet underlines the editors’ belief that a much-neglected twentieth-century writer can appeal to a new, modern-day readership. Jacobs moved to London as a young teenager in 1951, becoming a member of Philip Hobsbaum’s ‘Group’ when it was based there. Nameless Country comes twenty-two years after Collected Poems & Selected Translations, edited by John Rety and Anthony Rudolf. Whereas Collected Poems is much more comprehensive, containing essays by Philip Hobsbaum, Jon Silkin and others, Nameless Country seeks to ‘bring the poet’s best work to a new audience.’

Nameless Country is divided into six roughly chronological sections. In the first section, ‘Early Poems’, the reader is greeted by a black and white photograph of a young Jacobs, with the epigraph ‘… as if born in a different climate …’ As with the book’s blurb regarding the poet’s marginal and multiple cultural identities (an assignation repeated in his biography and Merle Bachman’s introduction), the first poem of the collection foregrounds his ‘alien’ status: ‘I was born in a strange land. / Though I never invoked strangeness’. These early poems are struck through with a distinct sense of historical awareness and place. ‘Langside’ mulls on the eponymous battle in 1568 that saw Mary Queen of Scots defeated by her brother, James Stewart, Earl of Moray. The poem reveals a sense of the uncanny: the hill upon which the author sits is ‘half proud’; ‘A tall queen, sad and ghostly, / Sometimes mounts the wind’; Scotland is described as ‘this strange slow dying land’. In ‘On a Trip to York’, Jacobs is reminded of the infamous anti-Jewish pogrom of 1190, and traces a line from medieval York to modern genocidal atrocities in Kiev and Warsaw. His reference to the Old Testament in York Minster implies a connection between the Jewish and Christian traditions, despite the persecution of Jewish people at the hands of ‘the good archbishops’ who ‘gently smile in stone’:

But I stand and watch the choirboys, two by two,
In red and white, marching to evensong,

And think: The dead of York and Kiev and Warsaw
Lie in no ghetto of the heart.

The second section of these selected poems contains extracts from the 1976 collection The Proper Blessing. Here, the poet’s sense of his religious identity develops: ‘Yiddish Poet,’ ‘Isaac,’ ‘Before the Trial of Eichmann,’ ‘Jerusalem,’ and ‘Tel Aviv 3.30 am’, as their titles suggest, wrestle with what it means to be a Jewish poet following the horrors of the Holocaust and the establishment of Israel. It was during the 1960s that Jacobs would write his Jewish identity into his name. After leaving Israel in his thirtieth year, he began signing his poetry ‘A. C. Jacobs’. The ‘C’ stands for Chaim – the Hebrew word for life.

The multi-layered linguistic and cultural identity of Jacobs helps to explain some of the most interesting uses of language in his poetry: in ‘Dear Mr. Leonard’ for instance, Scots, Yiddish, and English influences coalesce. The reader is told about a Jewish aunt who is ‘scunnered’ when she sees her relatives eating non-kosher meat:

An aunt of mine remarked to me:
‘Ah’m no froom
Bit whan Ah see them
Ee’in the trayfi meat
It scunners me.’
I found this very striking.

The poems from the third section of Nameless Country are taken from the 1991 pamphlet A Bit of Dialect. This is the shortest section of the book. In the poem ‘Place’, Jacobs embraces his mixed identity with tender emotion:

‘Vilna’, or Vilnius, the capital of Lithuania, is the city of his grandparents’ birth and one of Jacobs’s vital starting-points. In ‘Region’, the reader discovers that the ‘nameless country’ of the book’s title is Scotland. In one sense, Jacobs belongs to Glasgow, his city of birth, but his poetic longing pushes beyond place names:

There are
Few buildings, byres mostly, or low cottages
In the distance.
On maps it is
All named, this place, accounted for.

But to me looking over it now
Towards the sunset
It is a nameless country
That could be mine.

‘So Always’ is the concluding poem to the fourth section of the collection. In it, Jacobs acknowledges the effect his heritage has on his writing, however the linguistic and cultural influences are ‘no mere theme’:

So always a dark past surrounds me
With its figures broken across strange tongues
And places unreconciled. I am moved
By what I cannot fathom, hurt by what
I cannot hold.
Yet it is no mere theme
Of unresolved longing I follow in the shifting
Trappings of my verse.
It is no lost look
At a fabulous kingdom I hunt down.

In the fifth section of Nameless Country, the poetry focuses almost exclusively on Jewish cultural identity; many of the poems were written while Jacobs was resident in Israel. An ambiguous and conflicted feeling about Israel is communicated as Jacobs recognises the ‘Israeli Arab’ who ‘was trying, of course, to make / The best of an impossible situation.’ In ‘Sabbath Morning: Mea Shearim’ the poet acknowledges the precarious situation of the Jewish people in the Middle East: ‘with the woollen maleness of shawls / Wrapped as holy armour round their backs.’

‘About Making’ is the opening poem to the concluding section, ‘Place’. Here, the poet examines the craft of poetry in a self-reflexive turn. Poetry can be a form of resistance and has the ability to incite change:

It is as well to be careful,
To pare down statement,
To keep close
To the unsayable.

But also bear in mind
There is deliberate silencing,
To speak up against it
To make oneself heard.

Although all of the poetry in this collection is concerned with religious, national, linguistic, and cultural identity, it is reductive to focus solely on these influences. Many of the poems display a profound human empathy that goes beyond any allegiance to a particular people or place, such as ‘Poem for Innocent Victims of War’:

When you were people
We could have loved you,
Found out your names
And brought you presents.
We could have walked around with your response.

Overall, the structuring of Nameless Country works well to showcase the most important themes of Jacobs’s work, and demonstrates how the thematic focus of his poetry correlates with the chronology of his writing. Place, language, religion, and diaspora are the most prevalent themes.

In our time of Trump and Brexit, with anti-immigration rhetoric on the rise, the poetry of A. C. Jacobs achieves a new relevance in its celebration of humanity and diversity, and in its deep understanding of the importance of an inclusive and expansive understanding of where and how we might belong.

Nameless Country by A. C. Jacob is published by Carcanet, 2018.

‘What Planet’ by Miriam Gamble

Miriam Gamble’s third collection of poetry, What Planet, published by Bloodaxe Books, follows in the footsteps of her two previous collections The Squirrels Are Dead (2010) and Pirate Music (2014). Born in Brussels and raised in Belfast, Gamble studied at Oxford and Queens University and today lectures in creative writing at the University of Edinburgh. […]

‘Let Me Tell You This’ by Nadine Aisha Jassat

In Borderlands/La Frontera, Gloria Anzaldúa gives us a theorizing on the border between the United States and Mexico, extrapolating from this physical location her now seminal argument on the borderland, one which both stands as a hallmark of and still infuses queer theory and women of colour feminism. She writes: The U.S.-Mexican border es una […]