If you are reading this article, you are obtaining information in a second-hand form, translated at least once from oral to written, from aural to visual, and from Gaelic to English. That is why reading is not enough to understand and appreciate eighteenth-century Gaelic poetry and song. To illustrate this thesis, consider the following example from the work of non-literate bard and song-maker Rob Donn MacKay, who lived from 1714-1778 in Durness Parish, Sutherland:

First man who travels to Sutherland, take word to Clever John of the verses;
Isn’t his body handsome and shapely, and deformed the soul within it;
The flatterer of the avaricious hollow eyes, completely filled by greed,
Praised the shrivel-arsed, splay-footed, lichen-covered old person, and was proved
to a hundred to be false.1

What does this verse tell us? To start with the obvious, it is in Scottish Gaelic, it is set to music, and I sang it (at the MLA), which is exactly how it was communicated by its author. Significantly, the first line of the song refers explicitly to oral transmission, urging the first man who travels to the other end of Sutherland to repeat it to its intended target, Clever John of the verses, who was involved in a long-running, long-distance satire contest with the bard. And despite the fact that John Sutherland himself was a literate, bilingual schoolmaster, he exchanged insults with Rob Donn in Gaelic verse communicated entirely by word of mouth. If a poet’s principal audience could not read, literacy was largely superfluous, but music was not, as a catchy tune made the words easier to remember. And sometimes a familiar tune added another layer of meaning to the words, conveying inter-textual references to other songs by melody alone. Those references might even be bilingual – if the tune printed here looks (or sounds) familiar, you may know it as ‘The Jolly Miller’, with the refrain ‘I care for nobody, no, not I, and nobody cares for me’.2

This example is part of a rich tradition of oral poetry and song that was very much alive in eighteenth-century Gaelic Scotland, co-existing with an equally rich and sometimes overlapping song tradition in the Lowlands that provided inspiration and raw material to both Burns and Scott. At that time, Scotland had two languages – Gaelic and English – and two cultures – oral and written – that influenced one another in multiple ways, often through music, or through intermediaries such as local gentry, ministers and schoolmasters who were bilingual and bicultural. As they did for Rob Donn, these ministers and their families often transcribed Gaelic poetry and melodies from non-literate bards and arranged for their publication.

It is particularly ironic that – at least in this case – literacy was not even an advantage to the survival of the poetry. Rob Donn – the non-literate cattleman – eventually had some 225 of his poems published, while the literate schoolmaster’s were lost, neither published nor preserved orally or in manuscript. This was confirmed by one of his descendants, now living in California, who told me that all of his papers had been destroyed in a fire.3 Thus in eighteenth-century Scotland, the ability to read and write was neither necessary to the composition or reception of poetry nor sufficient to ensure its preservation thereafter.

But that was then. What about now? Today Gaelic poetry and song face the opposite problem – everyone can read but few know Gaelic. Scotland has undergone a profound language shift, so that English and English literacy are now universal and Gaelic is an endangered minority language. The historical reasons are many, including hostility from church and state, educational policy, the Highland Clearances, emigration and population loss, English-language media, and globalization. But the result is that very few people can now read or sing the songs in Gaelic, even in Rob Donn’s own district, where the language has almost disappeared. When I started my PhD, the last edition of his poetry had been published in 1899, and most of his songs had never been translated into English or published with music.4 Oral transmission had also declined, with only a few songs still in the repertoire of Gaelic singers. So what could be done?

I decided to work on two projects, a community heritage project called the Rob Donn Trail, and a bilingual songbook called 100 Songs of Rob Donn MacKay, both of which are now completed. The Trail was sponsored by two local non-profit groups (the Mackay Country Community Trust and the Strathnaver Museum) that obtained grant funding to create a series of interpretive panels, a historical booklet, scholarly podcasts, and community art projects. My role as academic adviser was to use the knowledge I had acquired in libraries and return it to its community of origin (where the bard’s memory is still preserved, but only in residual fashion). To the best of my knowledge, the Rob Donn Trail5 is unique in its focus on a Gaelic poet, using bilingual signage to position his words in their original landscape, to give voice and physical presence to the people who once populated that landscape, and to inspire and offer visitors and residents alike a place to start if they want to learn more about Gaelic poetry or music or local history.

To help visualize the project, let me show you one of the nine panels and explain how they were designed: 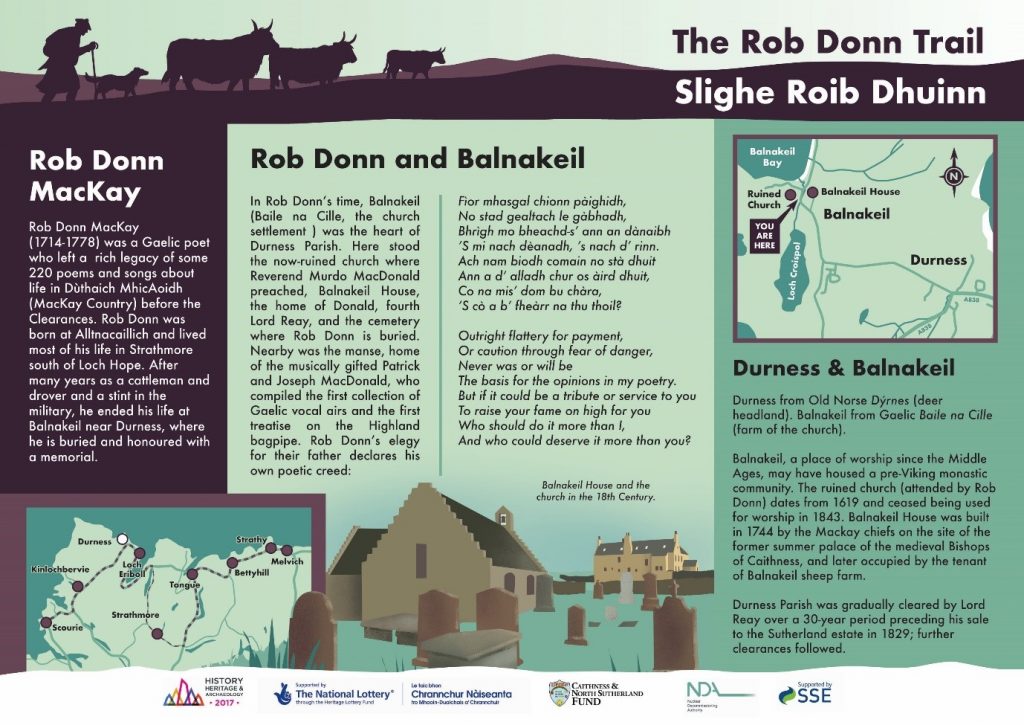 The material on the top and left is the same for each panel: the name of the trail, a logo, a short bio of the poet, and a map showing all the panel locations on the modern roads. The central text for each panel includes a bilingual excerpt from a poem and a few words connecting Rob Donn to that location. On the right is a local map with contemporary and eighteenth-century place names, plus a local history section identifying key changes in land use and settlement patterns from Rob Donn’s time to our own.

Here the illustration shows the church where the bard worshipped, the cemetery where he is buried, and the home of Lord Reay, chief of Clan MacKay. The quotation is the bard’s poetic creed, taken from his elegy for his long-time minister, Murdo MacDonald:

In effect, the interpretive panels assist the reader in the same three acts of translation as this article – from oral to written, from aural to visual, and from Gaelic to English – as well as adding temporal depth to the visible landscape.

The other project,100 Songs of Rob Donn MacKay, is a songbook intended for multiple audiences who will read and use it in different ways. The book has three components: music in staff notation, Gaelic texts, and English translations, each of which requires different reading skills. Reading staff notation requires some musical training, so the song settings are most likely to be read by Gaelic singers and musicians, as well as scholars interested in eighteenth-century Scottish music. Of course, reading music silently is never enough; it has to be performed and converted into sound. That is why I decided to publish a songbook, rather than a scholarly edition of the poetry (although that may come later).

Reading Gaelic texts presumes literacy in Gaelic, a skill that generally requires some formal education in the language and its spelling system, even for native speakers who are literate in English. My Gaelic texts are based on older published editions, but the spelling has been updated somewhat to improve transparency for contemporary Gaelic readers. So I hope they will be read by students and scholars of Gaelic poetry as well as singers.

Finally, the English translations will make the content of the songs accessible to a much wider readership, including local residents, visitors, and members of the Scottish diaspora, plus academics in fields such as Scottish history for whom they can serve as a primary source. The translations are line-by-line and as literal as possible to make sense in English, so they can be read either as a stand-alone text or to inform musical performance or comprehension of the Gaelic.

Put another way, the purpose of the songbook is to reverse the direction of this cultural translation exercise from written back to oral, from visual back to aural, from English back to Gaelic, and from the twenty-first century to the eighteenth. The English translations will allow the poetry to be understood more widely, and the musical settings will allow the songs to be sung and heard. So while reading is not enough, it is still a good place to start.