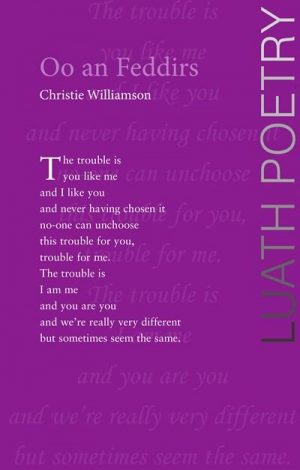 “What makes them Shetlandic?” I was asked recently by a senior member of the University of Glasgow’s Creative Writing department. I was outlining projects of mine to determine their compatibility or otherwise with one of their programs, and described the poems I aspired to make as Shetlandic. The best response I could find at the time was “Weel, I suppose I do.”

To be invited by a publication connected to the same institution to discuss the presence of Shetland and Shetlandic in my work is too fortuitous an opportunity not to take. The source of any Shetlandness as I tap these words out at home in Partick remains the same as the Shetlandness of the hypothetical poems I was discussing in Lilybank Gardens. It is, I suppose, me.

Literature is created by authors. Authors are created by their experiences. Having four Shetlandic grandparents, and having first seen the world from the wilds of Yell, this author cannot help but produce Shetlandic literature. Even writing about Nicaragua or New York, Cuba or my adopted home of Glasgow, it is with Shetlandic eyes that I see the world, and with Shetlandic ears that I hear it.

I do write in the English language – not just prose, for which it is an elegant and flexible medium, but also poems. I recall periods of time in which I have enforced an ‘English only’ rule to my own writing, in the interests of broadening my readerships. Such periods are onerous and yield thin-to-no rewards, other than relief and excitement when I return to what I’m best at.

If as I have asserted an author is the product of their experience, I am one of the lucky ones. I attended school at a time when ‘da dialect’ could be spoken in the classroom without fear of punishment. In upper primary, dedicated projects explored and celebrated our linguistic heritage. Da wirds an wyes o spaekin at wis native tae me an mine were seen in print. My copy o John J. Graham’s The Shetland Dictionary tells me it was first published the year I turned three.1 This was not yesterday.

I not only thought and spoke in Shetlandic, Shaetlan, Shetland Dialect or whatever you want to call it. I heard it broadcast, with Mary Blance especially carving out a niche in of all places the BBC airwaves; sung by Bobby Tulloch and other local artistes; and shared a buzz of excitement with my parents when publications like Christine De Luca’s ‘Voes and Sounds’ came into the house, bringing as it did the language we spoke with one another and expertly crafted poetry together.

The first publication I enjoyed was a short, eight-line Shetlandic poem. It was accepted by the New Shetlander, a focal point for Shetlandic literature since 1947. It is an ode to the north wind, which had brought, on a visit home, an abundance of snow leaving me stranded in Lerwick:

An yit, me bein thanks de
fur da herdness at du gies me
reddir as da herdness
at iddir aerts could gie you.2

The fact my first published poem was written in Shetlandic is something I had little-to-no choice over. Its sharing a title not just with the famous Lerwick bar but also the press (based in Stornoway) under whose imprint John Graham’s Shetland Dictionary was published was something I couldn’t resist.

The presence of Shetland and Shetlandic, or Shetlandness, in the poem is not limited to the linguistic medium. The concept of ‘nort’ is ingrained in the (or at least this) Shetlander. This is a consequence not just of our latitude, but also our socio-cultural and socio-economic ties to Scotland. Even after having lived in Glasgow for more than fifteen years, a part of me remains incapable of hearing Scots talk of going ‘down south’ without thinking ‘but you aaredy ir’. Had Shetland remained part of Western Scandinavia, perhaps we’d think of ourselves as ‘oot wast’, going ‘back aest’.

It is further Shetlandified by the home it finally found. For this, I owe a debt to many literary forebears and contemporaries. For a community of more than twenty thousand inhabitants, albeit with a broad diaspora, the cultural infrastructure of Shetland is impressive. As well as the New Shetlander, there are on and off line newspapers, two radio stations, a bookshop and a dizzying calendar of cultural events and festivals.

Without this cultural infrastructure, the young Christie would certainly have struggled to find homes for his early poems. Having ‘Thule’ published proved mortally intoxicating. Even if it took some time for me to send much work elsewhere, I had by now experienced the sight of my own writing in print. There was no looking back.

On advice, I began seeking opportunities to perform my work. For all the writing that I and my elders and betters have produced, Shaetlan as a linguistic entity remains primarily spoken. Having quickly adopted a ‘sooth’ accent upon moving ‘sooth’, part of the reason I ended up writing poetry was the tension between my Shaetlan inner dialogue and my ‘sooth’ external one. And here I was popping up at open mic nights, folk sessions and anywhere I was allowed to pop, externalising that linguistic entity through the codified medium of contemporary poetry.

It’s worth noting that for all my tendency to fall on the ‘page’ side of the false and injurious dichotomy people like to inflict on the poetry world, my theatrical experiences were integral to my earliest poetic practice. There are great parallels between the processes involved learning and rehearsing a script and the processes involved in putting a piece of poetry together in whichever language you may choose. You may (I did!) imagine some acting experience would make reading your work less daunting. In fact, reading one’s own writing is a valuable exercise for the actor, should they need to develop gratitude for the set and lighting design, the script making process, the direction and the layers of characterisation behind which his soft and vulnerable soul is hiding whilst it struts and frets its hour upon the stage. The absence of all this is indeed instructive.

I broadened the casting of the publication net to include publications based in Mainland Scotland, supportive as they had been to lodestars of mine like William J. Tait, Christine De Luca and Robert Alan Jamieson. If I have, as I must admit I have, at times in my life felt frustrated by being cast as ‘the dialect poet’, I wonder how else I could reasonably expect people to see me – especially given poems like this being unleashed upon the world:

Whilst the whole poem is studiously Shetlandic in language, the middle two verses are awash with Shetlandic cultural imagery. I expect few Shetlanders would need much explanation, but in the interests of this piece I’m grateful for the liberty to unpick what’s going on.

Firstly, da aald rock is a Shetlandic (Shaetlan) term for Shetland (Shaetlan), our island home. The phrase is semi-hidden inside the narrative of the poem because I’m a poet and poets can be like that (at least, this one is). Willie is of course Willie Hunter, the legendary fiddle player whose music I am regularly lucky enough to hear (no longer on the Sandstrøm which is now long deceased).

When ‘Willie’s strings / ring true’ a little musical phraseology is smuggled in, ‘ringing strings’ being a Shetlandic technique of fiddle playing whereby an open string is bowed at the same time as a fingered one. Violet is Violet Tulloch, Willie Hunter’s estimable accompanist on piano, and her purling fingers sneakily reference da sock, da makkin. Shetlandic knitting goes much further than knit one, purl one, but it’s not a bad start.

The first line of the third verse references, with deliberate unsubtlety, Willie’s classic slow air, ‘Leaving Lerwick Harbour’ – part of that tune’s enduring appeal must be attributable to the imagery so central to the Shetlander of sailing for Aberdeen, and all the dualism entailed therein. With improved access to travel, and the strong pull exerted on islanders by their home, the Shetlander Leaving Lerwick Harbour today is perhaps more likely than ever to ‘win back in/trow da sooth moo’, but for many in the past such an symbolic departure would have been final.

Whilst I don’t consider myself a landscape poet per se, invoking ‘da lie/o da hills atween/Twageos an da Nort Ness’ certainly conjures a lot of imagery for me it will (I suspect) be less vivid for someone who didn’t attend the Anderson High School and reside in the Janet Courtenay hostel.

Similairly, I don’t consider the third stanza to be a meditation upon the sea so much as my poetic self hijacking the sea in order to explore the metaphysical phenomenon of his exile. Being born an islander, I cannot know if that’s a particularly islander thing to do. I remember commenting to Nalini Paul after one of many appearances at ‘Reading the Leaves’ that I seemed to have read a lot of watery poems that night. “Well,” she said, “you do come from an island.”

This is of course a very limited sampling of my oeuvre, motivated by the focus I’ve been asked to take. The piece itself is largely in English, in the interests of overseas and other Shetlandically challenged visitors to The Bottle Imp website. In terms of output, I tend to make two Shaetlan poems for every one English – this is the ratio of my first collection, Oo an Feddirs. My second collection, Doors tae Naewye (expected February/March 2020 from Luath Press), has a slightly more Shetlandic ratio, though early drafts largely maintained the same ratio.

Scanning beyond these two books, the latest excitement chez Williamson is poems interweaving other languages (Spanish, German, Italian and the like) with Shaetlan. As they draw me further and further from Lerwick harbour, I feel a pull to explore in greater depth the historical, cultural and linguistic heritage that makes me, my work and Shetland Shetlandic. Forward tho I canna see, what’s gone before indicates a likelihood that any work I make from this exploration will be Shetlandic. What will make it so? Weel, I suppose I will.