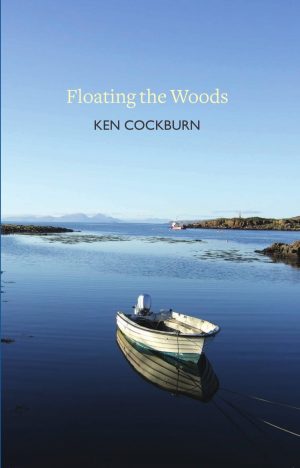 Floating the Woods, Ken Cockburn’s latest collection from Luath Press, contains in an authorial ‘Afterword’ the admission that all of these poems came about from various writing commissions, collaborations and residencies in his capacity as a freelance poet. Yet, for poems written for special occasions, this collection does not come across as disjointed, but rather it shows recurring themes and consistencies in his work, taking poetry outside of academies, into the wilds and to the people who might not ordinarily encounter it in their day to day existence. One striking feature is how many of these poems find power in the listing and cataloguing of items, as if Cockburn himself is a curator of human nature. The opening poem ‘Norm’ is a collection of social customs as regards greetings, the closing line reminding us sharply, in the days of Brexit, of our national unfriendliness to outsiders:

So what’s the norm in this neck of the woods?
[…]
what’s for breakfast, shop-talk, the latitude
or lack thereof accorded foreigners.

Cockburn lists the history of Orkney, comes up with a colour chart of shades of blue in ‘An Alphabet of Blues’ but this tendency to collect and classify and find music and poetry in that activity really comes into its own later in the book with poems such as ‘Crailing Pomona’ which is a paean-cum-tasting notes to the great variety of apples, such as:

Catillac
In some mouths autocratic,
monstrous – in others
a goddess’s breasts.

Cockburn’s accumulation of observations and urge to list in his poetry reminds me strongly of the ‘Scotland small?’ section of Hugh MacDiarmid’s Direadh poems, where MacDiarmid passionately defends Scotland against accusations of being small and insignificant by enumerating all of the plant-life that thrives on a Scottish hillside. It is no coincidence that Floating the Woods is almost entirely set in Scotland and islands such as Orkney. This is perhaps one of the triumphs of Cockburn’s work that, for all of its accessibility, it urges us to take our time and savour the moment. It preaches a form of poetic resourcefulness that is an antidote to boredom – where some people may just see apples, Cockburn sees a natural wealth that appeals to all of our senses. From the Ettrick countryside of the artist William Johnstone and James Hogg, to a stately if coldly marmoreal Georgian Edinburgh (‘from Pandora’s Light Box’), where people still live and reinvent the buildings they inherit, like the students:

One influence that hovers saliently over Floating the Woods is that of Ian Hamilton Finlay. Where Finlay’s work moved beyond the printed page and began to inhabit the land which inspired it, Cockburn’s work, too, feels like it exists equally in this present book, but also in situ in the places that it draws upon. Cockburn, like Finlay, engages playfully with myths and the aesthetics of the Roman Empire, to show us how, more than two thousand years on, we live in more or less exactly the same way:

Listen. You worship
who you like BUT
the Emperor’s a god
AND I want the taxes in
by the new moon.

(from ‘A Wee Word of Advice from the Empire’)

Poetry is, in many ways, about paying a debt to others – other poets, other people, other places – and repeatedly in Cockburn’s poetry you get the impression of a poet who has sown nothing but good will in his craft and is slowly reaping this in his work. This is perhaps most apparent in the strongest poem of the collection, kept for last, ‘Midwinter Wishes’, which abounds with the poet’s generosity:

I wish you a midwinter fog
to attend to what’s closest.

I wish you midwinter snow
as a page for your footprints.

I wish you midwinter ice
so the thaw when it comes
cracks all the louder.

This poem additionally stands out because it is one of the few poems here that contains a first-person lyrical ‘I’ speaking voice. Cockburn rarely allows his ego or presence to get in the way of the delivery and telling of his poems and even here the first-person speaker only gives the poem a sense of urgency and directness. There is never a sense that he owns the poem or the experience behind it, but rather that he works in service of the poem, in its best interests. From some of the poems, such as ‘Backwater Republic’, you might be mistaken in thinking that the poet is consciously retreating from urban centres, or else from the stresses and strains of a busy world, yet other poems, such as ‘Cloqueliclot’ are concerned with the big questions of nationhood, empire, war and the legacies of all three. Visiting the war-fields of Flanders, the speaker observes a contrast between the deathliness of official mourning for those dead in the war, and the fecundity of the earth, how it yields ‘Swollen cabbages and walls of sweetcorn’. There is no sign of a poppy (coquelicot) anywhere, but a child, trying to pronounce the word in French as spoken by her mother, inadvertently forges a new, trans-language word that mixes poppy (coquelicot) with cloqué (blistered) and clot, which brings to mind again the bloodshed:

A horse fat with summer ambles over.
Coquelicot, says her mother, coquelicot.
A starling-cloud settles on a pylon.
Cloqueliclot, the girl fumbles, cloqueliclot.

Although this book is composed entirely of separate ‘occasional’ poems, these poems nonetheless fuse together to become a major poetic event. Cockburn is a taxonomist of human experience and humankind’s attempts to render the natural world and its phenomena into language. The title Floating the Woods might sound ethereal, as if the poet is escaping and drifting off into their imagination, but instead these poems find a poet illuminating real life. ‘Cloqueliclot’ finds the speaker bemoaning the fact that they cannot fly like a bird, and are ‘stuck here with [their] gravity’. The physical poet is rooted via gravity on earth, but their work in Floating the Woods is clearly airborne.

Floating in the Woods by Ken Cockburn is published by Luath Press, 2018.