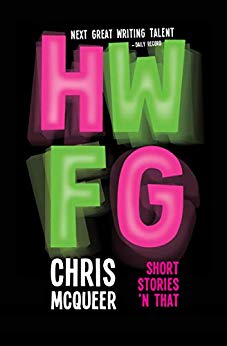 Glaswegian gigs are known for being some of the best on the planet, and the iconic chant that gets the crowds riled up goes ‘HERE WE, HERE WE, HERE WE F**CKING GO’: this is what the text-speak acronym stands for in the title of Chris McQueer’s second collection of short stories released in the last two years by the independent Edinburgh publisher 404 Ink. McQueer’s first short story collection, Hings (2017), met with considerable success, winning the Saboteur Award for Best Short Story Collection in 2018. What’s more, BBC Scotland have recently turned Hings into a sketch show under the title Chris McQueer’s Hings with McQueer appearing as the on-screen narrator. McQueer’s writing has drawn exciting comparisons to the likes of Limmy, Irvine Welsh, and Charlie Brooker; it is safe to say that the darkly humorous literary tales contained in HWFG: Short Stories ‘n That are worthy of such praise.

HWFG contains nineteen stories with an extra story, ‘A Weekend in Twitter Jail’, locked up behind bars at the back of the book. Some of the stories in this collection contain characters that will be familiar to those who have read Hings. This time, Big Angie opens the proceedings with an ill-fated trip to Craig Tara caravan park, while Sammy gets jobs as a shopping centre Santa and a crime scene cleaner before going on to have a bad trip on acid with dreadlocked hipsters in Glasgow’s West End.

Most of the stories in McQueer’s collection are written using a Glaswegian system of spelling, as can be seen in the opening line, spoken by Big Angie: ‘If there’s wan place oan Earth ah love as much as ah love Blackpool or Benidorm, it’s Craig Tara’ (p. 1). The stories range in length from just a couple of pages to the longest story in the collection, ‘Leathered’, which is forty pages long and was first published by Speculative Press in 2018.

Comparisons between McQueer and Charlie Brooker become most apparent in ‘Extreme Polls’, a surreal techno-horror story that would not be out of place in a sketch-show spin-off of Black Mirror. Similarly, ‘Under Surveillance’, a story about the all-seeing eye of government surveillance watching through phones, computers and TVs and listening through Alexa devices, is a twenty-first century science fiction tale that deals with present-day anxieties around Big Brother government. The only hiccup in ‘Under Surveillance’ comes when a joke is made about the Glaswegian language being lost in translation, as if the ghost of Stanley Baxter has suddenly appeared from the 1960s and is replaying his Parliamo Glasgow sketches:

McQueer draws heavily from Glaswegian comedy and popular culture. ‘Interview with the Shoe Guy’ references the comedy sketch-show Burnistoun — specifically, the rap that asks ‘Whose shoes are they?’ when random footwear is spotted littered on streets. ‘Interview with the Shoe Guy’ is McQueer’s answer to this burning question; perhaps anti-climactically, a gruff character called Kojak does it because ‘It’s suhin tae dae’, and ‘It’s a laugh’ (p. 169).

‘Snails’ is a story in which McQueer raises questions about form: what is a short story anyway? The piece opens with the lines: ‘This isn’t a short story. Apologies first of all for that. This is a conspiracy theory I’ve wanted to share with folks for ages’ (p. 155). As is common with McQueer, the not-short-story brings in conspiracy theory and quirks of the brain (namely the Mandela Effect) as well as playfully alluding to serious contemporary concerns (in this case, global warming).

The stories in HWFG, as well as in McQueer’s existing body of work, are connected by a gothic preoccupation with the physically grotesque. ‘Hawns’ is a twisted and hilarious story that you might expect to hear in a nightmare pub, in which the narrator proves to be the ideal donor for an involuntary hand transplant. In a similar vein, ‘Moth Part 1’ and ‘Moth Part 2’ are stories of a Kafka-on-the-Clyde reverse metamorphosis meets Invasion of the Bodysnatchers, as a moth burrows its way into the ear of an unsuspecting and inebriated man, bringing about a disorienting effect on the reader as the moth struggles to manipulate the ‘fleshy piece of machinery’ that is oldGordon’s body (p. 171). In the most viscerally horrific part of the collection, oldGordon’s body is cooked inside a sunbed as the moth that has taken possession of his brain revels in the ecstasy of bright light:

After an hour, the eyes were now practically boiling in their sockets and starting to shrivel up like dehydrated fruit. Its skin was cracking and peeling. It resembled a dried-up lakebed on the Serengheti. It began to sizzle and split open, allowing hot, congealed blood to seep out. (p. 176)

Another horror story in HWFG that deals with possession is ‘Ghosts’. After a ‘spokesghost for the spirit world’ (p. 119) reveals the true existence of otherworldly spirits to the Prime Minister, the government enforces a law of cohabitation that means every house in the country will receive delivery of a ghost. Jamie is encumbered by a Glaswegian poltergeist called Senga who likes to wind him up by rearranging cupboards and hiding the remote control. Jamie ends up being landed with yet another ghost: this time, it is a sleep paralysis demon named after Glasgow’s patron saint Mungo. Mungo makes it his mission to wear Jamie down and possess him.

‘A Weekend in Twitter Jail’ gives the collection one more tune. McQueer finds himself as a character in the universe he has created and alludes to a real-life Twitter spat that McQueer had with the French footballer Loïc Rémy. Frank, who fought Kim Jong-Un Insane College Wrestling style in ‘Leathered’ is McQueer’s jailor. McQueer is locked up in the Tweet Wing of the prison with online trolls, much to the disdain of his maw and granny.

HWFG is a brilliantly written and darkly humorous collection. McQueer is the builder of Glaswegian dystopian universe that surpasses the city limits by tapping into today’s zeitgeist and exploring serious issues such as Brexit, unemployment, violence, drug and alcohol abuse, and death, but all the while with a sustained surreal wit that makes HWFG a belter of a book.

‘The Other Side of Stone’, by Linda Cracknell

Central to the writing of acclaimed author Linda Cracknell is the intellectual production of emotional geographies. Based in Aberfeldy, Cracknell writes prose, fiction, and non-fiction that revel in a corporal, intimate knowledge of place and space. Her 2014 Doubling Back: Ten Paths Trodden in Memory is a collection of walking tales retracing a series of […]