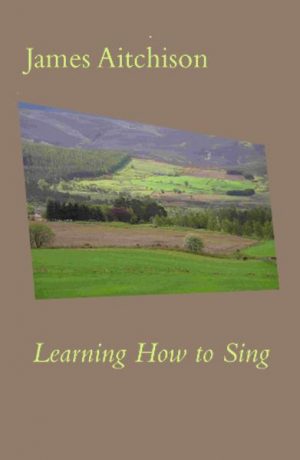 I once reviewed a collection of poems by the fine poet James McGonigal in which he, in a very genuinely diffident way, referred to himself as a beginner or a learner in the field of poetry. What strikes me with James Aitchison’s latest collection Learning How to Sing is that again, I have come across a sophisticated and seasoned lyrical poet who insists on referring to themselves as a novice:

I’ll carry on until the neural sluice
runs dry and dying networks cry, ‘A truce?’

I’ll send my work to editors half my age
in places I’d never think of visiting.

I’m still in debt, still paying the mortgage,
still learning how to sing.

(from ‘Learning How to Sing’)

This is not something that annoys me, quite the opposite in fact because it is not pseudo but very real modesty. Poetry as a discipline is a life’s work, it is all ‘revision and slogwork’. We seem to begin as poets very bumptious and sure of ourselves, sure that we have something meaningful to say and the skill with which to say it. I once felt slightly patronised by my late friend Alexander Hutchison when he said that my own poems were ‘charged particles’ that moved in a ‘small orbit’. I suppose I objected to the ‘small’ part, but I should have been flattered, which I learned to be later. Aitchison sees the advantages as well as the disadvantages of getting older, as a process of jettisoning baggage that reveals yet more ontological baggage:

I’ve grown light-headed from abandoning
opinions, principles, ideologies
and faith in the significance of dreams.

I’m free, I tell myself,
from mind-clogging encumbrances, and yet
I wake up with a grudge against the day.

It is only as the poet grows and keeps writing in the face of rejection, misunderstanding and living that their emotional range and intelligence swells and they move from certainties into doubt and questioning. The fact that poetry has a perennial appeal to the likes of Aitchison and McGonigal is because they will never be able to render into words exactly what they want to say and then have a reader who, in Aitchison’s words might be a ‘galaxy’ apart in terms of experience, understand it exactly as they intended it. That is not a cause for alarm or despair, but creative excitement – a melioristic process where the poet keeps coming back to old issues afresh. To use W. S. Graham’s mantra: ‘TTBB’ (Try To Be Better).

Of course there is much more to Aitchison’s poetry than this. In his work, there seems to be a fascinating synergy between the urbanity, domesticity and gentility of what he writes – a retired literary gentleman celebrating the carse in Stirling where he lives and the joys of his garden – and his continual awareness of pre-history and pre-discursive experience. ‘In the Beginning’ is a poem that neatly subverts the Biblical idea that everything began with what could be rendered into words. Instead, Aitchison argues that:

By some genetic accident
our branching neural networks chanced on speech.
And so we say, ‘In the beginning was the word’.

‘Smell’ is one of the most effective poems at melding the small-scale, present day and domestic with an awareness of the far-back, primordial soup, and how that atavistic past is still very much with us, ready to surface at any time, given the right sensory and neurological triggers:

A neighbour gave me a bucket of pig’s blood.
‘Fertiliser. For your vegetables.’
I left the bucket in the greenhouse.

Two days later when I opened the door
the smell of butchery and sacrifice
bypassed my frontal lobes
and fired the reptile neurons in my brain.

What I admire most is that Aitchison casts himself as a retired garden potterer, the least likely person to say anything sweepingly relevant or challenging about our human condition, and yet given a few lines of poetry, he can bring the process of evolution vividly alive. Aitchison’s strength is that he has strenuously avoided conceptual or thematic stasis in his work – he has always been looking for new horizons in his role as the ‘learner’. That said, Aitchison is not averse to playing up his age for effect, as in this witty two line poem ‘Sharpening’:

When mind gives way and I need mindless chores
I sharpen loppers, shears and secateurs.

Aitchison’s mind, however, is never blunt but at all times keen, whetted by knowledge. Don’t be deceived by the formal constraints and appearance of his lyrical poems. He is vitally interdisciplinary, in a way that reminds me of Hugh MacDiarmid and his call for a synthesis of human knowledge in poetry, where poetry should be interested in science and science interested in poetry. There are praise poems here for Edwin Hubble and his telescope, poems of stargazing and sea voyages, archaeological and ornithological examinations of Hirta, Iona, South Uist and Barra. At the same time there are poems that celebrate the Arts and culture – such as those for Duke Ellington and Anne Sexton. While the intellectual catchment area of Aitchison’s concerns as a poet is vast, he is also capable of turning out traditional lyrical poems, such as ‘Gap Years’ which reminds me strongly of Norman MacCaig’s ‘Country Postman’:

Ernest Marple, Postmaster General
in the late 1950s,
sent hundreds of undergraduates and me
a letter of thanks for delivering Christmas mail.

My gap lasted decades before I saw
that the blessing I got from walking in the rain
made me oblivious
of my unpaid and now unpayable debt.

My ignorance is inexcusable
as my excuse:
for three winters I went from street to street
and door to door delivering good news.

In the history and pre-history of the world, language and poetry are such modern phenomena, so it is hard for any poet writing with any degree of skill at the end of their lives to think of themselves as anything other than a novice in recording the ‘miracles’ that they have witnessed. Anything other than the Socratic paradox of ‘All I know is that I know nothing’ seems erroneous and delusional. Yet, it is Aitchison’s acceptance of the inadequacy of language and his self-identification as a learner that gives his poetry its wide appeal, application and authority. Above all, in Learning How to Sing we are made to feel how much Aitchison loves his calling, just how much gratitude he feels:

‘I find it easier to write than not.’
Yesterday’s words sound like hubris now
but they were a thanksgiving, not a boast,
the words of a near-innumerate man
trying but losing
count of an astonishment of stars.

Learning How to Sing by James Aitchison is published by Mica Press, 2018.