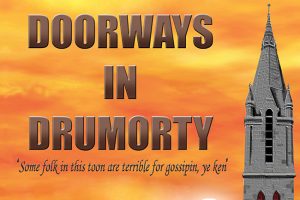 Every few years Lorna Moon surfaces in the Scottish literary consciousness. This recurring ‘resurgence’ has been propelled either by the advocacy of critics such as Margery Palmer McCulloch, Carla Sassi and David Toulmin, who were fascinated by her work in terms of feminist, modernist, regionalist and nationalist interests, or through media projects inspired by her astonishing life story. She rises, illuminates, then is obscured again by the clouds of canon and convention. (Moon somehow promotes the purple prose found in her novel, Dark Star.) This spring she has come to public attention again, through an invigorating tour of Mike Gibb’s play Doorways in Drumorty by theatre company Awkward Stranger and by the release of Gibb’s collection of stories Drumorty Revisited (Hame Press, 2019).

Gibb’s play, which first toured in 2010, is sharp, funny, cleverly staged and brought to life by the vibrant performances of a cast of three. Moon herself, born Nora Low in Strichen, Aberdeenshire, in 1886, is cunningly crafted into the vignettes which make up the performance. Her incarnation as 1920s Hollywood script writer opens the play; the banning of her 1925 collection of stories Doorways in Drumorty from Strichen Library provides its penultimate scene. Moon’s vivacity of style is well-represented and the Scots voices are engaging. The small-town world of gossip, surveillance, judgement, in which the smallest action is noted and interpreted, is nicely delineated. The comedy is strong but the emotional engagement evident in the audience at the play’s last performance (Dundee Rep) shows the power of these stories to evoke sorrow and horror too. 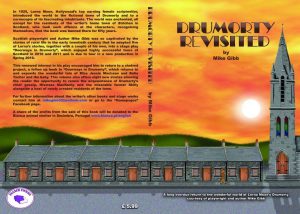 As with the play, Gibb’s collection of stories holds everything together through a double narration by the heart of censorious Drumorty, Mistress Mackenty, and Jessie Maclean, who increasingly challenges small town morality. Moon’s story of Bella Tocher, outcast mother of an illegitimate child, provides the perfect focus for both perspectives. Gibb covers much of Moon’s material, including (in the play) a subplot from her novel, Dark Star (1926), in the story of Jane Clark and her lace cuffs.  Neither play nor collection include Moon’s more challenging material: her extraordinary story, ‘Wantin’ a Hand’ is perhaps too dark for the general tone of both. Her interest in tinkers, tramps and marginalised figures is not brought to the fore. But Gibb, in the stories in particular, does convey that underpinning melancholy, the fascination with death, evident in her fiction. (Gibb’s addition ‘The Twinnies’ works at just that level.)

Good (and welcome) as this reworking is, it remains a challenge to do Moon full justice in this revised format. Part of the problem is context. It is difficult, almost one hundred years later, to see in Moon the level of danger that led to her books being banned. Certainly Moon was writing from the distance of Hollywood but her fiction was in sharp dialogue with the north-east world she had left behind. In its disruptive power it also spoke back to, and feminized, the Kailyard world of Ian Maclaren’s ‘Drumtochty’. The play makes a good attempt to convey the challenge she presented. But it also raises questions about the kind of engagement such a version of her writing produces. The audience in Dundee roared with laughter at this world of women ogling after husbands and preening, pompous kirk elders. It seemed to be a laughter of recognition but are these tropes familiar from experience, folk memory, literature? Hoe does this sit in relation to Scotland in 2019?

One of Gibb’s additions, ‘The New Minister’, is excellent in its sharp lines and good comic scenario. Yet while the tale of unfortunate Mildred, pushed into finding a husband at any costs and forced to set her ‘unattractive’ cap at the new minister, our laughter feels in a way outdated. Indeed, wouldn’t Lorna Moon have been more encouraging of possible rebellion, maybe even a running away to Hollywood for Mildred? The retelling of these tales with the benefit of hindsight almost inevitably makes them more nostalgic, more sentimental, however harsh the message.  So these retellings lead to some interesting questions about self-visioning. Moon’s work itself challenges our literary configurations. Where exactly does it sit in relation to Grassic Gibbon, Kailyard fiction, Nan Shepherd?  This excellent production and its two sources lead to these larger questions but the enjoyment created confirms there is an appetite for pursuing them.

Doorways in Drumorty by Mike Gibb was performed at the Dundee Rep Theatre from 18 April — 18 May, 2019. Drumorty Revisited by Mike Gibb is published by Hame Press, 2019.

‘Reappraising Jane Duncan: Sexuality, Race and Colonialism in the My Friends Novels’ by Rita Elizabeth Rippetoe

Jane Duncan is a Scottish writer neglected by critics and ripe for reappraisal. Rita Elizabeth Rippetoe’s study goes some way to addressing Duncan’s overlooked fiction, illuminating the life of an author who can best be understood in relation to the changing world she inhabited and the specifics of her own geographical journey. Her book indicates […]