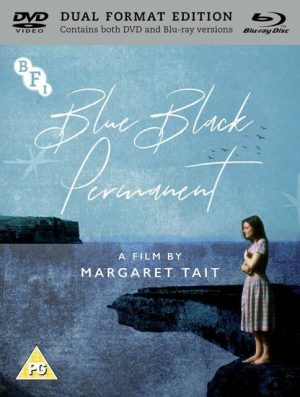 This year marks the centenary of the Orcadian filmmaker and poet, Margaret Tait, who was born on Armistice Day, November the 11th, 1918.  During her lifetime, Tait produced over thirty short films, self-published three volumes of poetry, two collections of short stories, and became Scotland’s first female feature filmmaker with the release of Blue Black Permanent in 1992.

As part of the centenary celebrations in November 2018, the British Film Institute (BFI) re-released a newly remastered 2k digital scan of Tait’s only feature film, and in June this year, the film was released on DVD for the very first time. Until now, Blue Black Permanent was difficult to get a hold of and was rarely shown apart from the few screenings of the BFI’s 35mm prints of the film, which had grown increasingly fragile over time. The re-release of the film has enabled the work to reach new audiences and has also allowed for a fuller appraisal of Tait’s work, who for the most part, is best known for her short experimental works.

Blue Black Permanent was completed very late in Tait’s life, when Tait was in her 70s. In many ways, the film was the realisation of a life’s work. Although Tait’s achievements as a maker of short films are truly exceptional, she frequently stated that the short films were always made with the bigger picture in mind.

It was always Tait’s intention to make a feature length film. She trained first as a medical doctor and served in the Royal Army Medical Corps during World War Two. After she returned to the UK, she wrote a number of scripts, as well as short stories and poetry. She then went on to study film at Centro Sperimentale di Cinematographia in Rome in the 1950s, a period greatly influenced by the neorealist filmmaking methods which were to inspire Tait’s own approach as a filmmaker. After returning from Italy, Tait focused on her short films, but this was arguably out of necessity. When her attempts to attract interest in her film scripts failed, she concentrated her efforts on making short films on minimal budgets. Most of Tait’s films were self-funded.

Tait may have worked relatively independently for much of her career as a filmmaker, but she still had hopes to eventually make a feature length film. When she finally did, with Blue Black Permanent, she relished the opportunity to work with a large cast and crew. Her various notes relating to the production of the film, held in her paper archive collection at Orkney Library and Archive in Kirkwall, gives testament to this. For instance, letters between Tait and the film’s producer, Barbara Grigor, and Kate Swan, co-producer, offer a sense of their shared commitment to the project, something akin to the camaraderie Tait would have shared on some of her earlier filmmaking endeavours, when she had collaborated with fellow students in Rome. Tait even hoped to complete a sequel with Grigor, who had retained the sequel rights. Unfortunately, like Tait, Blue Black Permanent was the only feature film Grigor would complete.

After Grigor’s untimely death in 1994, Tait expressed the desire to do a sequel in Grigor’s memory which would follow the narrative of the young boys grown-up. Sadly, Tait’s death in 1999 also prevented this from ever coming to fruition.1  Another feature film would have been a natural progression. She did, however, go on to make a final shorter work, Garden Pieces (1998). The film also continued Tait’s collaboration with John Gray, the composer who had worked on Blue Black Permanent. Tait commissioned Gray to compose the soundtrack for her last film.

It is clear that, for Tait, there was no doubt that the kind of poetry she developed in her short films, could also be achieved in the larger feature film.  Although Tait’s vision would remain fiercely independent, and collaborations were not always free from tension, there was little doubt over the benefits of working with others. In a short essay by Tait, titled ‘Film-poem or Poem-film: A Few Notes about Film and Poetry’, which appeared in a publication edited by the London-based filmmaker, Peter Todd, Tait writes:

The great joy of directing BLUE BLACK PERMANENT was in working with the cast and the crew, each bringing their own qualities into the feeling of the whole thing. It’s mainly the actors and actresses who give so much greater scope in a feature compared to a short. They and the characters they create bring it into quite a different dimension from what can do working away by oneself with a camera and an editing bench. Even all the organisation associated with having performers affects the dimension. One of the miracles about film is that that, and all the complications of production on a wider scale, don’t have to quell the poetry that’s inherent in what’s being made, so long as it is there in the first place.2

The film’s performances are powerful: Gerda Stevenson was awarded a Scottish BAFTA for her performance as Greta in in the film. As Tait intimates in the above passage, the actors bring some of their own poetry to the screen. For Tait, making the bigger picture — making feature films, and working on a bigger scale — didn’t mean compromising the poetry. For her, cinema itself was essentially a poetic medium. In Blue Black Permanent, the poetry is there on so many levels: it’s in the story in the sense that it’s about a poet, but also, the film itself is expressed as a kind of poetry — through the cinematography, the film’s labyrinthine structure, and its own internal rhythms. The BFI’s season at the Southbank, which premiered the new digital scan of the film, and was curated by Peter Todd, was aptly titled, ‘Rhythm and Poetry’, reflecting this central preoccupation in Tait’s work.

Tait wrote in her notes relating to her feature film that:

The film should be on the level of music, or of poetry, both in its construction – through variations in rhythm, through repetition, harking back and forward and so on – and in the filmic equivalent of rhymes and metaphors, having with all this a lucidity, or even a sort of transparence, not letting shades of meaning lead to too great obscurity. 3

Blue Black Permanent was literally a life-long project of Tait’s. The very first draft of the script, then titled Dark Waters, was begun when she was a student in Rome. In her notebooks from the time, notes on the story’s early development are interlaced with accounts of her daily activities, from a few words on a talk given by the Anglo-Irish poet, Cecil Day Lewis to her thoughts on recent films she’s seen, including De Sica’s Umberto D (1952): ‘a poetic success’. Even in Tait’s early descriptions of Dark Waters, her commitment to express a kind of poetic truth through a careful consideration of the material world around her, is evident. She writes how, for Dark Waters, ‘The lyric is a poetic statement of things as they are’, something that ‘is not concerned with cause and effect and dramatic evolution’4.

Although the narrative changed as it developed over the years, its focus remained relatively the same, as a story about three generations of women, with a central focus on the poet, Greta, who is haunted by the memory of her mother who drowned in the sea, or the ‘Dark Waters’, many years before.  In many ways, the evolution of the story, and its persistence as an idea that would develop throughout Tait’s life and work, is mirrored in the content of the film itself, a film which Tait described as being about the ‘persistence of the spirit – spirit of a place, spirit of a culture, and chiefly, the spirit of the creative person at the centre of the story.’5 So, too, Tait’s legacy endures.

Blue Black Permanent is available on DVD and Blu-ray from the BFI from the 17th of June, 2019.