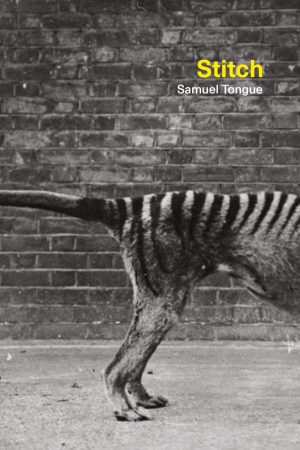 Stitch by Samuel Tongue (published by the innovative Scottish press, Tapsalteerie) is a mirror which reflects back many of the issues facing our wee blue planet in 2019, and allows us to see further back to their roots in the expansionist policies of an Empire on which the sun eventually set. Its focus is mainly on the devastation wrought on the indigenous, in particular the Tasmanian people and the now extinct thylacine of the cover.

The opening poem ‘A Tasmanian Devil Speaks to a Settler’, is reminiscent of the war-weary soldier in Wilfred Owen’s ‘Dulce et Decorum Est’. In it, the ‘banshee-pig’ of the title reminds the new world, these new ‘children ardent for some desperate glory’ that they too are in a living hell, that their theologies and beliefs are unwelcome and vulnerable. A century after Owen’s poem, Tongue still jolts the reader with the obscenity of cancer and blood, only this time the ‘over-stuffed pack’ belongs to another front-line soldier waging a very different war. A similar voice appears later in ‘Device’ although quieter, from a more empathetic being, but carrying a more erudite, restrained menace. Not the voice of Owen’s soldier but now the voice of the gas shells ‘dropping softly behind’.

And so the curtain is up, we have been warned. Beliefs will be challenged. There is a war on. There will be collateral damage.

These poems move effortlessly from past to present and from monochrome to vivid colour such as the event described in ‘Your Hijab is Colourful and Perfect’. A confident statement which belies the confusion hidden within. The poet is watching a Moslem woman breastfeed her baby. Mother made Madonna by the Catholic backdrop. The confusion is caused by the veil, the hijab as the metaphysical seclusion and attempt to conceal it implies has been totally removed from the scene:

Your baby’s head is the same blush
as your breast. They fuse in the sun.

No averting of eyes here, just a poet being treated like a blind man? Or a penitent in front of a statue?

‘The Dogs of Valparaíso’ is a warning again but this time voiced by one of the 2.5 million ‘quiltros’ or stray dogs to be found in Chile, the street-corner, door-stoop bad boys of its cities.

The poem contains a skilful repetition and recycling of words and phrases which change the perspective leaving a Picasso-style impression. I have pencilled ‘decasyllabic quatrain, Spenserian (double) sonnet, Dryden’ alongside ‘Neruda, Allende, elements of sestina’. All question marked, but the mix creates an aesthetic tension which eventually lets us pass through unharmed towards ‘Noah’s Pigeon’ and ‘Fish Counter’, which rollercoaster between the divine and the vulgar, allowing us to catch a breath although we are soon back at the heart of the matter.

‘Decapitation Grant (superimposed)’ is an attempt to understand the thylacine and through its treatment, the colonial mindset. He wants to get close to this chimera:

Dog-headed-pouched-wolf that shouldn’t exist,
I am still hunting

It is left to the poem, to poetry to capture the animal as neither time nor distance have any hold over imagination. The gentle ending to the poem is exquisite.

In ‘Löwenmensch’ we travel from the firelit world of prehistory where the lion-headed totem of the title was carved to the flame-grilled burger of the zoo. The clarity with which Tongue links the eternal themes of protection, of the inter-relationship between our species and things unseen is reflected in the rolling pattern of sestina-like end words. The vision is 20/20.

The hybrid theme continues with ‘Not Government Issue’, a tale of a rather different hybrid from the sirenesque Dipper or the Löwenmensch. The poem puts us firmly back in the Antipodes where an escaped convict, colourful in his clownish ‘slops’ escapes by hiding inside a still warm kangaroo skin where his metamorphosis happens.

In ‘Containerization’, ostensibly a snapshot of a disposable world, Tongue returns to the footprint we are leaving for the future. Visually it is a block, a stream of words, bouncing off each other. In the chaos though, there is a clear moral stance and worldview which continues into the next poem: ‘Notes on the Anthropocene/ what survives of us […] fracture record’, which opens out the previous list into a clear warning of the toxic nature of our footprint.

The pamphlet ends on ‘Seasonal’, a poem celebrating beauty and life but which ultimately acknowledges that we are dying from the day we are born. The sickle, tool of choice of Old Father Time, will be used to try and silence the trumpets of the apocalypse. Some, like the thylacine, will wither; others, like the toxins, will stay.

This is poetry very much of today but with an old soul. There is musicality in the tercets, the rhythmic undulation of quatrains. From hints of Dryden and Wilfred Owen, from Spenser to Allende, Samuel Tongue shows his understanding of the mechanics of poetry as well as the ability of a well-honed phrase to bring difficult subject matter into sharp focus. ‘Stitch’ is about life’s increasingly impoverished tapestry, about things woven together, about dropped stitches and stitched-up things. The poems serve as a warning that our actions may leave us with only a taxidermist’s view of the past.

Stitch by Samuel Tongue is published by Tapsalteerie, 2018.