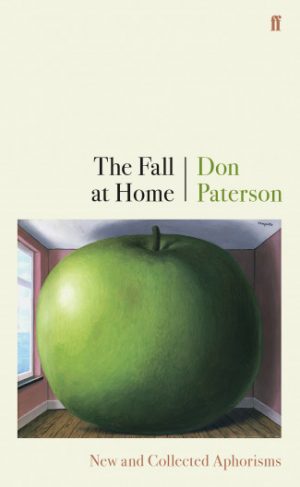 Until this book recently came my way for review, I was unaware of poet Don Paterson’s parallel life as an aphorist but having read it, I am grateful for the chance encounter. The Fall at Home is his third collection – a ‘New and Collected’ – of this pithy, peppery but under-appreciated literary form. Paterson, tongue planted firmly in his cheek, is the first to acknowledge the niche-ness and hard-pressed-ness of his chosen side-line discipline, saying that a poet like himself is ‘someone in the aphorism game for the money’. At least an aphorism ranks slightly above prayer on Paterson’s own hierarchy of literary forms: ‘[d]esire and flattery are nowhere sung so nakedly’. Indeed, Paterson even does his best to repel the advances of any potential reviewer. For Paterson critics are those ‘too clever for novels, too sceptical for poetry, too verbose for the aphorism, all that is left to them is the essay – the least appropriate medium for the foiled’. He warns:

Ill-advised as this may seem, it is precisely what I had to do with The Fall at Home although I agree that it would be a titanic endeavour to polish off all of Paterson’s aphorisms in one sitting. This is not to say that they are in the slightest bit dull or trite, but that such books are designed for dipping into in a desultory fashion in the hope of making some illuminating discovery. To read them all one after the other is to force the brain to adjust to hundreds, if not thousands of different condensed moods, atmospheres and thought processes. The only rest the brain gets is when the eye momentarily alights upon the section glyph that separates each aphorism. However, Paterson also admits that ‘Inconveniently, books are all the pages in them, not just the ones you choose to read’, and for this review I have taken this particular aphorism at face value.

The book concludes with an assessment, in aphorisms, of noted aphorists, and few are spared the sword other than Chesterton (‘the only really great aphorist in English’) and Heraclitus (‘To read him for the first time is like digging a hundred knives from the ground, all of them still gleaming’). I’d like to briefly suggest that Paterson might consider adding the Russian writer Andrei Sinyavsky to his pantheon of great aphorists, his A Voice from the Wilderness being a peerless collection of aphorisms written while in prison. I say this because it was only while reading Paterson’s book that I began to think more deeply about aphorisms and realised that most of my own creative writing life has been conducted in them – the emotional kernels that I jotted down in prose that on rare occasions grew into poems. But for Paterson, the aphorism is the end in itself and he makes us stop and realise the power of brevity, and of distillation. Twitter might have forced people to boil down their inanities to 140 characters, and Paterson’s view of the smartphone is ‘that clam of hell’, but his work here is a salutary antidote to that, re-injecting the throwaway remark with meaning. Some of his little statements can be lyrical, koan-like and epiphanic:

In my adult life, the time I have actually lived inside the present
moment would amount to no more than a single day. If only
I could have lived it as a single day; it would have thrown its
light into all the others, like a brazier in a dark arcade. Instead I
find my way by sparks, and what they briefly make visible.

Paterson’s aphorisms have little time or solace for those who believe in a maker on high or an afterlife. However, this does not turn him into some sort of cliché-touting New Age guru, hell-bent on ensuring we live mindfully in the present. To those who urge us to ‘seize the day’, Paterson replies:

That’s all very well, but were I actually to ‘live every day as it
it were my last’, right now I’d be lying on the floor with my
hands in my pants and my mouth open under a Mr Whippy
machine, waiting for the police to show up and arrest me for
the murder of Boris Johnson.

Paterson can certainly be gruffly and gallusly witty, but his assessment of Heraclitus above shows that many of these aphorisms can give off sparks and light, rather than just grit and sulphur. His work in this book is clearly non-prescriptive – we are not being told to change our ways or to agree with his take on the world, but increasingly I found myself on his wavelength as regards issues of politics and particularly class. Again, there is humour to be found here, such as the ‘poor Socialist Worker friend’ who has to fork out £180 for a new donkey jacket ‘which is now only available as an item of couture’. But there are also more serious moments when Paterson really seems to hit the nail on the head, rather like reading the latest James Kelman novel:

Our ‘wonderful variety of regional accents’ has been achieved
by ensuring that half the population can’t afford to travel
more than ten miles from their birthplace.

The ‘local delicacy’ is often a tricky encounter, since it most
often has its roots in making a specific poverty tolerable.

I expect economics to be revealed one day as an occult science,
i.e. one which creates the reality it then investigates.

Since it was never their birthright, the working classes are
rarely in unselfconscious possession of their intelligence […]

These aphorisms as a rather jaundiced, anti-theist middle-aged heterosexual white male. He is, as we’ve seen, unafraid to depict the grotesquerie and grim carnival of the body and of the flesh and is frank about the shortcomings and frustrations of his own life. One of the more enjoyable aspects of this is his undisguised schadenfreude and sometimes contempt for poetic contemporaries or upstarts, coming from his own self-deprecating view of himself:

I run into a coeval for the first time in ten years. He had
become monstrously fat. I tell him, truthfully, that it is a
perfect delight to see him.

You’ve made a blog … Clever boy! Next: flushing.

Anyone whose students ‘teach him as much as he teaches
them’ should lose half his salary.

Other times there is the sneaking feeling that Don Paterson, one of the leading poetry lights of his generation, is kicking the ladder away from underneath him that he himself used to scale such great heights, insulting student poets and giving us some aphorisms that seem to blur the line between mock-heroics and false modesty, dismissing all interest in reviews and talking about cultivating enemies, suggesting that one needs to be important enough to have them in the first place. Even these are still funny and add to the overall eclectic rag-bag feel of the collection. On a pedantic note, I do find it rather remarkable that a publisher as estimable as Faber & Faber didn’t have a proof-reader capable of spotting the mistake on page 16: ‘Sir Peter Maxwell Davis’ should be ‘Davies’. I do hope, however, that with The Fall at Home the status and worth of the aphorism is reappraised, if not revived altogether as a valid medium, because some of Paterson’s aphorisms are spot-on:

There are men and women who talk so seamlessly of
themselves you wonder when they managed to listen long
enough to have acquired the power of speech in the first place.

The Fall at Home: New and Collected Aphorisms by Don Paterson is published by Faber & Faber, 2018.