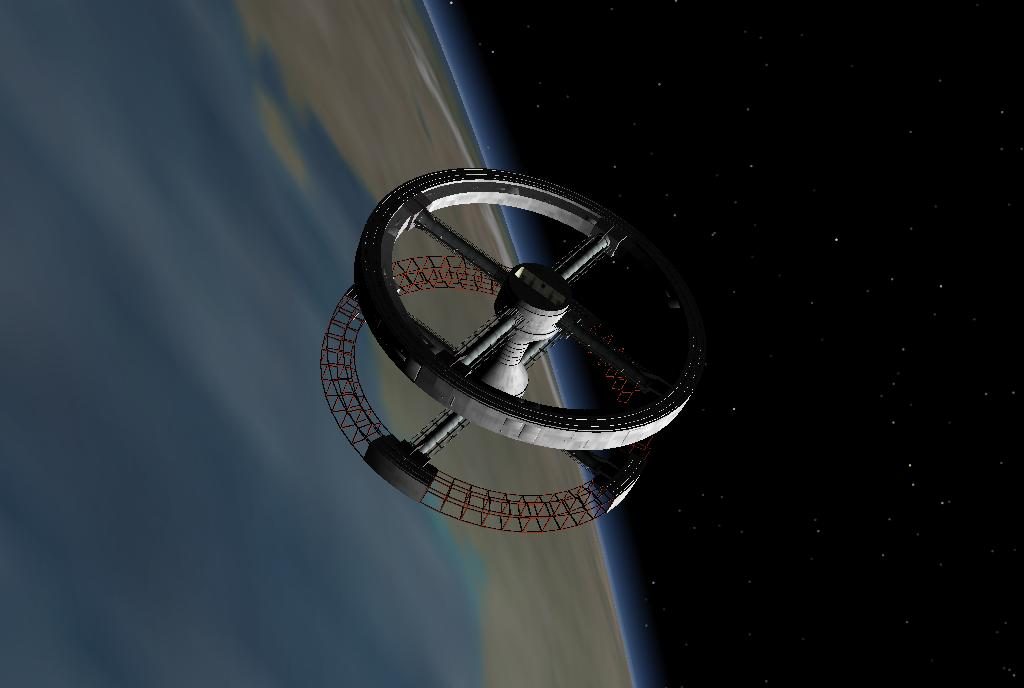 “Space station V morning” by Les Chatfield is licensed under CC BY 2.0

Deep Wheel Orcadia is a space station orbiting a gas giant, a few hundred years in the future and a few light years from Earth. Astrid was born there, and has returned after studying at art school on Mars. Darling, from a wealthy Mars family, is on the run and visiting Orcadia for the first time. They’re an item. Here we meet them halfway through the book …

whar benks is shuitten back fer the dansan.
Darling trys tae listen, but

hid’s that peedie, an jeust past the waas
is the tide, the starns, an aaldwarld things.

Thay birl, touchan yet, but Astrid
staps awey an the uncan body

Darling and Astrid take a walk through the corridors of Meginwick

to seespot young people are glowering still; further, the bell they’d go to in pairs;

where benchesshelves are shoved back for the dances. Darling tries to listen, but

it’s so small, and just through these walls is the atmosphere of the gas giant, the stars, and all the oldworldancient things.

Their hands swing close, touch, twine, pull back, touch more. And then – Astrid?

They spinturn, still touching, but Astrid steps away and the stranger

says That’s never you? The strangerpersonbody is Gunnie, who twelve years ago

was Astrid’s inseparable friend, who ten years ago got tiresomegrumblingboring, whom she hasn’t spoken to

at all since she took the ship to Mars. And who’s this then? saysasks Gunnie.

Astrid has forgotten how to do this, and stumbles through asking after Gunnie’s family,

giving news of her own, rememberknowreflectwilling only to share what she doesn’t mind

everyone on the stations hearing within two hours, maybe less.

they have both grinnedgrimaced and promised, says cheerio, and firmly takes Darling’s bewilderedstupified hand.

“So wha’s thee fock?” speirs Astrid, but
Darling’s reply is “Boring! You don’t
want to know.” “Thoo kens mine!” says Astrid,
but things wi them is ower caller
fer her tae be a needle or
a hammer. “Whar’d ye bide, than?”

“A’m only seen hid fae ap on Ascraeus.
Hid’s a peedie bit peedier fae thare.”
Darling snushes. “Too peedie for me.
This is more my size.” Sheu spraeds
her airms, raxan oot the tap
o the mintie taing o the mintie staetion,

tae haad twa meuns an a normous o starns.
“A miss it,” says Astrid, an Darling’s ferly
palled. “Hid’s true. No jeust me freends,
but bidan somepiece A coud be…”
“Be what?” “Be onybody. Or no
mesel. Or jeust no hiv tae be:

whan thir that mony fock,
that much tae deu, thoo deusno hiv
tae be.” Darling haads her haand.
“But you still liked to walk up
the biggest mountains in the system?”
“Yass. Else hid wis gey haird tae see.”

They speak about Mars

“So, tell me about your family,” asks Astrid, but Darling’s reply is “Boring! You don’t want to know. “You know about mine!” says Astrid, but things between them are too freshcleanhealthy for her to be a needle or a hammer. “Where did you livestayremain, then?”

Darling describes the greatbig domes and towers of Chryse, well enough to be convincing, close enough to true. Astrid kicks an eyebrow, because Chryse was far too wealthygolden and Angle for her heterogeneous jumble of a friendship group.

“I’ve only seen it from up on Ascraeus. It’s a fair bit smaller from there.” Darling snorts. “Too smallyoungminor for me. This is more my size.” She spreads her arms, stretchreachexpanding out of the top of the tiny promontory of the tiny station,

to hold two moons and a huge number of stars. “I miss it,” says Astrid, and Darling’s verystrangely at a loss. “It’s true. Not just my friends, but livestayremaining somewhere I could be…” “Be what?” “Be anybody. Or not myself. Or just not have to be:

when there are so many people, so much to do, you don’t have to be.” Darling holds her hand. “But you still liked to walk up the biggest mountains in the system?” “Yes. Otherwise it was very hard to see.”

but the black haert o her silence haes aafil gravity,
an so the conversaetion fags, faas,

“This is my new friend” – and the layers in “friend” aren’t sure and won’t be explained.

Darling is charmingattractivecomely now: she’s someone other than the frightenednervous tourist Astrid met.

Maybe the thought of parents firedinspired performance. With Darling’s silence about her own parents,

she notices their vowels rounding, their consonants clipping, their words switching to matchequalmate Darling’s own,

and becomes unspeakably seething with rage. As her own “een” slips to “one” she goes silent, yearning

for someone to notice, for her mother to say “FriendChildLove” and with it bring her back to the table,

but the black heart of her silence has greathorrible gravity, and so the conversation failsflags, falls,

hears itself, grows less and less true, till it’s only Darling who’s still smiling and speaking.

“Orkney Library and Archive, Kirkwall” by summonedbyfells is licensed under CC BY 2.0 For a small place, Orkney has produced an extraordinary literature. Simon W. Hall’s 2010 study, The History of Orkney Literature, which won the Saltire Society First Book Award that year, drew a magisterial line from the sagas through modernism to the contemporary […]

During the 2014 Referendum, I remember the repeated assertion — in tweets, columns and books — of the normality and ordinariness of Scottish independence. If a people and the land they live on are a nation, then the default state for that nation should be statehood.  These arguments persist forward and backward in time: in […]

Much of what is good and true in our laws and social customs, much of what is manly and vigorous in the British Constitution, and much of our intense love of freedom and fair play, is due to the pith, pluck, enterprise, and sense of justice that dwelt in the breasts of the rugged old […]