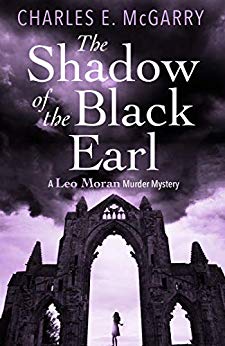 Charles E. McGarry’s second crime novel, The Shadow of the Black Earl, adds a supernatural twist to Scotland’s detective scene. Leo Moran, the protagonist, a private detective from Glasgow, visits Biggnarbriggs Hall after the death of a friend. The country hall belongs to Leo’s close friends, the prestigious Fordyce Greatorix and his sister Evelyn, setting the murder mystery deep in rural Scotland and refreshingly outwith the grip of the familiar crime-ridden city. Blessed with the supernatural ability of darna shelladh (a literal Gaelic translation of ‘second sight’), Leo Moran experiences visions of terrible events both past and present. Whilst visiting his friends, he receives a distressing premonition regarding a young woman who subsequently goes missing. To make matters worse, her disappearance mirrors that of another young woman who disappeared thirty years earlier. Are these disappearances connected? Leo Moran intends to find out.

One reads the book tentatively at first, unsure of the period the novel is set. The terms ‘old stick’, and ‘Rolls-Royce’ seem to place the story securely in the 1950s until the ring of a mobile phone thrusts the reader into the twenty-first century. Indeed, throughout his novel, McGarry skillfully interweaves the old and new, evoking a bygone era within the setting of the present day. He places an ancient Highland world within a modern-day detective drama, juxtaposing the supernatural with cold hard crime. This ability to be dark and dated, where the reader forgets their whereabouts only to be pulled into the current technological age, is what makes this novel such a success. Although at times disjointing, McGarry achieves an uncanny sense of the coexistence of both the past and present. Merging folklore, myths, and pagans with today’s concerns, he creates a feeling of insecure temporality. This unsettling feeling that the past haunts us – or perhaps the scarier notion that we are not so distanced from it – pervades McGarry’s novel.

Masonic rites, promiscuous women in the wilderness, and witchcraft feature in this enchanting novel. And Moran is not your typical Tartan Noir detective: he engages with a distant upper class in a way that is uncommon in today’s gritty crime fiction. He is also not afraid to embrace romantic opportunities when they arise. Similarly, his tense relationship with the police compels him to pursue his visions alone, meaning he often seeks allies in people, stories, and myths. As a detective that knows more than he can interpret, he calls into question the relationship between the undiscovered and the unexplainable, the unknown and the yet-to-be-discovered.

What follows is a paranoid folk-horror plot where you are expected to suspect everyone (including the dead). Everyone has the means, motive, and opportunity to be the murderer. Yet, despite this heightened tension, The Shadow of the Black Earl does not seem contrived. McGarry has mastered the fine art of balance, and the fast-paced moments of realisation and revelation are mixed with peaceful walks through the landscape and personal encounters with characters in their natural habitats. Although it can be unnerving, this balance gives the book a stillness not often seen in the world of Scottish crime fiction.

The Shadow of the Black Earl by Charles E. McGarry is published by Birlinn, 2018.

Dreaming Bread and Skyrie Stanes: A Celebration of Scottish Folk Magic and Community Traditions Scottish Storytelling Centre, Sunday 11th November, 2018 ‘Dreaming Bread and Skyrie Stanes’ set itself an ambitious agenda: to bring together folklore in practice, and folklore in theory. It did this through a celebration of Scottish community traditions: ‘balancing reflecting and recording, […]

We need to talk about witchcraft. That’s not a demand: it’s an observation. As a historian who studies Scottish witchcraft, I find in conversations that people don’t ask me what I know about it; rather, they’re keen to tell me what they know. For instance, I’m often told that witches were ducked in Edinburgh’s North Loch. Even more […]