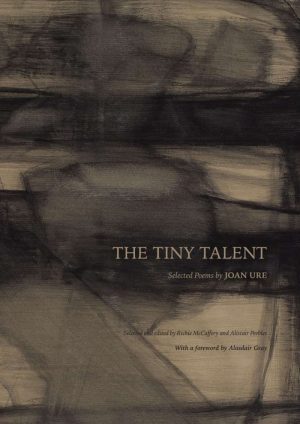 ‘There was this woman and she had this tiny talent’. So begins the poem whose title is that of this short collection of the late Joan Ure’s poetry. Yet, if the poem is to be read as self-referent, one has to reflect that Ure in her writing, whether dramatic or poetic, was a sophisticated – and often self-effacing – ironist. The Editors’ Notes for this collection cite a letter written in March 1963 to Christopher Small, formerly Glasgow Herald literary editor and drama critic: ‘I don’t write poems. I write pieces for acting. Sometimes I type them with irregularly shaped lines, but that’s to help an actor read them, for the sake of the sense, but I don’t write poems at all.’

Well, you could have fooled this reviewer.

What Ure does not do is write florid, highly metaphorical, image-laden poetry. She writes a poetry of tight observation, both of herself and others. ‘To Margaret on a Monday’ sees the progress of an older woman ‘moving uphill / climbing a step at a time, alone’. Ure contrasts the freedom of ‘seagulls swooping the sky’, observing the different reactions of youngsters diffident in the face of ‘so much courage’ and an older man who stops ‘to have the privilege / of walking beside you’, knowing he has ‘a lot to learn from you’. Ure concludes with the thought that what drew her to the front of the house was the chance to see Margaret, ‘going up the hill / as if it was easy’. This poem reflects themes that recur in many of the poems in this admirable collection: the often-neglected power of women, the contrast between the apparent freedom of natural creation and human social constraints, the preciousness of moments of insight. And her insights are often surprising and mind-openingly refreshing. In her tumultuous ‘Answer on the Side Drum in 1963 / to the Blast of the Trumpet in 1557,/ with less than respect’, when one might anticipate her proto-feminism might lead her simply to excoriate John Knox, she shows compassion for the man’s months of servitude in French galleys and respect for his work as an educator, observing ‘He cant blast me doon noo wi his blethers / […] But it’s no just his mistakes that hiv scarred us’, and concluding ‘if Knox lived among us in the Sixties/ […] We could grant him our equality’.

Often, Ure’s moments of insight were hard won, if won at all. ‘In Memoriam 1971’ remembers women, both family members and famous writers, who had committed suicide. As she begins to address the possibility of hope and survival for a new generation of daughters, she observes ‘a need for words there were / no words for’. Such concision exemplifies what Small, in introducing Ure’s Five Short Plays (1979), observes of her dramaturgy:

Concentration was always her aim, achieved by allusion, ellipsis, an uncommon capacity to make every word work for its living and carry as much meaning as possible, and at the same time to move with natural grace. In a word, she was a poet; but though also a lyric poet, one who fully grasped the fact […] that drama is another mode of poetry.

As Anne Varty observed in The Edinburgh Companion to Scottish Drama, Ure:

defied conventional distinctions between poetry and drama. “Is it not possible to have a poem made out of theatre?” she asked Giles Gordon, director of her poetically titled play Punctuated Rhythms.

It may be that Ure’s generic and formal border-crossing meant that, in her lifetime, her plays did not find wide production and her poetry appeared sporadically in magazines rather than in collections of her work (the one under review is the first to appear, in effect to mark the fortieth anniversary of her death in 1978). There is also a recurring directness about her work which, while often full of allusion – several of her plays refer to and resonate with Shakespearian characters, for example – at the time she was writing (pace the poems of Sylvia Plath) was not entirely fashionable. ‘GLASGOW Easter 1968’, for example, opens: ‘I hate this city. And I reject it.’ Here is no paean of praise of the ‘dear green place’, even in Archie Hinds’s ironic take on that sentimentalised ‘translation’ of the city’s name. This short poem lays about its themes with some gusto:

There is no gentle
place for a woman here.
It is a land of wee
hard men […].

The enjambment in these four lines is powerful and significant. If Ure did write for performance whether in poetry or drama, she certainly pointed up her emphases in her rhythms and line-structures.

In ‘The Tiny Talent’, Ure follows her opening line thus:

I call it talent for things must have a name.
She had this talent that it happened to be death
to hide. She knew this empirically because, having
the first time, tried to hide it, she
broke out in a rash.

It is difficult, when Ure’s recurring ill-health is well-known, not to read an autobiographical note here. But there can be no doubt of her great talent. As the poem concludes:

[…] However late you
find it out, it is always good to know what it was
they meant, those few who’re describing things that
can’t be proved, but can be acted out
again and again.

Forget ‘tiny’. Ure’s was a rare talent, in both Scots meanings of ‘rare’.

The Tiny Talent: Selected Poems by Joan Ure, edited by Richie McCaffery and Alistair Peebles, is published by Brae Editions, 2018.