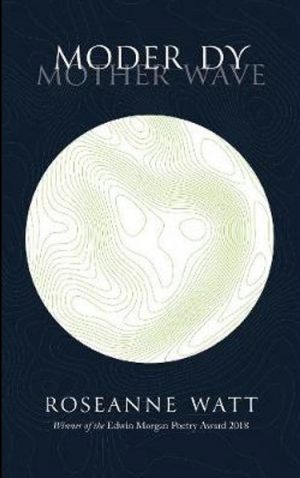 Moder Dy is Roseanne Watt’s first published collection. She won the 2018 Edwin Morgan Prize for the best unpublished collection of poetry by a poet under the age of thirty. Two things are clear from the quality of the poems in this debut publication: the Morgan Prize judges found a worthy winner; Roseanne Watt is a fresh and refreshing poet. On the basis of this first collection, one could reasonably predict that she will contribute for years to Scotland’s chorus of brilliant individual poetic voices.

Her poems have a concision and vitality of language that carries the sense of precise immanence one associates with haiku. Indeed, she includes four short poems on page 61 entitled ‘Haiku’. None quite conforms to the exact syllabic and linear structure of original haiku. What they embody, however, is a sense of being haiku translated. The ‘translation’, even transition, is also embedded in their location, some set in Shetland, one in Leith. In reading, both silently and aloud – as with all her poems here included – they provide one with the profound sense that Watt is engaged in translating transformative experience.

Of course, one can assert that all creative writing engages in translation of experience. Here, however, Watt engages in that process in a particular, as well as that more generalised, way. She writes both in and between Shetlandic (she uses the local name for this Scots dialect, ‘Shaetlan’, rather than the more academic term) and Scottish Standard English (SSE). As she explores experience through words – shapes on the page and sounds for the ear – she moves between the resources of poems solely in Shaetlan, poems solely in SSE, poems using both languages and poems which appear on facing pages once in Shaetlan and then in SSE.

Morgan himself would be delighted by the way she exploits, as she sees fit, the ways words fit, fit on and are fit for the page. The very shape of the five different poems on, say, page 57 to 61 matters. In ‘Nightwalk with Natterjacks’, the phrasing and positioning of the words convey vividly the aural and visual sense of the walk at night:

All around us the air
Ignites

on their sticky calls;

and we become more
silhouette

‘Etymology’ in its entirety reads:

listen
the wind through the trees
is naming this place

The succinctness of this four-line poem embodies a richness careful (re)reading reveals. Time and again, poems surprise by the sureness and economy with which they bring the reader to fresh perception, understanding and experience, as if carried by an underswell of emotion and thought.

‘Moder dy’ is Shaetlan for ‘mother wave’. This is the underswell which, according to a Scots Magazine definition cited as an epigraph for the collection, old Shetland fishermen believed ‘always travels in the direction of land no matter from what airt the wind blows, and even in the calmest weather’. The definition carries within it the elements which underlie and interact in many of the poems: sea, land and weather. Watt engages with these elements, their chanciness, the occasional strangeness of the interaction of all three. It is no surprise that several poems talk of the shoormal, ‘the shoreline mark on a beach; the water’s edge to sunder’ where sea and land each engage the other. But Watt also brings to – often-startling – life animals and folk. The first poem is ‘Haegri’ (‘Heron’). This evokes for its dedicatee, ‘Stuart’, a memory of a day and place in which the sighting of a heron – ‘curled like a question mark / at the lip of the hill’ – and its flight mark ‘those places we have not yet / quite returned from’.

The final poem in the collection ‘Selkie’ addresses the mythical creature in its moment of transition. It begins:

Let us stop
at the moment of unsealing

the skin, the body within
slipping easily
from its heavy jacket of flesh

and into another kind of heaviness.

The meaningful pun of ‘unsealing’ – discarding its phocine nature and opening what is secret – and the internal rhyme of the third line both typify the grace and delicate touch of Watt’s poetics. Here is a writer who is spare in language and stylistically sparing. The poem and collection conclude:

Let us stop
at the moment’s parting

like blood moving
in the dual chambers
of the heart;         let us be

red, alive and undone
let us be barely human.

Watt’s poems are entirely and unadornedly human. They also explore life beyond the human, moving meaningfully and flexibly between the two rooms of Shaetlan and English. The book contains a glossary of its Shetlandic vocabulary. This helps us read the poems’ depths and subtleties as they draw from the dual linguistic chambers of their heart. It is also a reminder of the reality of the two rooms, the translation required in understanding one another even within one language community. But Watt does not represent these rooms as vacant. She brings to their expression clarity of expression, unsealing their richness. Archibald MacLeish resonantly concluded ‘Ars Poetica’ with ‘A poem should not mean / But be’. Watt’s poems make a false dichotomy of MacLeish’s disjunction: they both mean and be. Their creative economy also exemplifies beautifully the maxim, ‘Less is more’.

Moder Dy by Roseanne Watt is published by Polygon, 2019.