On this sunny summer day, Dornoch is a tourist place. Its golf course hems the white beaches and its church is famous for the baptism of Madonna’s son, Rocco. It is picturesque and thriving, and legend claims it’s the last place a witch was burnt in Scotland. There are no surviving records of this death, and it is only through oral history and folklore and other unofficial accounts that we have this story. They tell us Janet Horne was murdered here in 1727 or 1722. A stone marks both the place of her execution and the end of the witch trials, a nightmare period for Scotland.

For the last year, I have been visiting stones, fountains and even hedge mazes dedicated to people who were accused witches during the Scottish witch hunts of the seventeenth century. I’ve mapped them and added field notes with a kind of trainspotter impulse. There are many secreted away outside a village here, beside a suburban lawn there, each with its own story. Some are called ‘The Witch’s Stone’ or are menhirs marked with a date. Some are nothing but a big rock with stories, told over hundreds of years, attributing them to the women killed during the witch trials of the seventeenth century.

The Witch’s Stone of Dornoch is also called the Janet Horne Memorial Stone. Like many other monuments I’ve visited, its attending stories are muddled and conflicted. In her work on the witchcraft during the Enlightenment, Lizanne Henderson points out that the most retold parts of Janet Horne’s life were not published in print until ninety-two years after her execution.1 Her death was part of a witchcraft panic in the historic Highland county of Sutherland in the 1720s. If the accounts are true, it was no less savage for being the last. Nine years after her death, the Witchcraft Act of 1735 would make all trials and executions for witchcraft illegal.

The story I tell of her must begin with the old fairy tale introduction: there was and was not a Janet Horne. The name of the last woman to be executed for the crime of witchcraft was never recorded. Janet Horne was not actually her name, as that name is a kind of ‘Jane Doe’ of Scottish witches. In discussing Janet Horne’s story, Henderson explains that the similar name ‘Jenny Horne’ is the universal name for a witch in the north of Scotland.

The story goes that she died an old, senile woman but when young, she was a lady’s maid and travelled to Italy in service. On returning to Dornoch she married, and the rest of her life isn’t noted by the myriad sources, except to mention she lived with her daughter who had a deformity of her hands and feet. Late in her life she moved to Kintradwell in Loth, twenty miles north of Dornoch; she was an ‘incomer’ there.  Incomers were often met with suspicion and neighbours were seemingly hostile. In Thomas Davidson’s 1949 work on Scottish folklore and witchcraft, Rowan Tree and Red Thread, he explains that the community accused her of riding her daughter ‘like a pony’ after she had been shod by the devil.2

In the Highlands in the eighteenth century, fairy belief was widespread and children who were sickly or deformed at birth were considered changelings: children who the fairies had taken and replaced with their fey offspring. In the nineteenth century, John Gregorson Campbell recorded such fairy belief as well as instances of changeling children being left on a beach to be drowned. Sometimes they were rocked over a fire as a kind of exorcism. It is interesting to note that drowning and burning were also legendary tests for witches. Janet Horne’s daughter would have possibly been seen as a changeling who had never been reclaimed by the fairies, and that her mother was suspect as fairy kin.

There is also no written record of Janet Horne’s charges or her ordeals.  What we have is an oral history of the event, noted almost one hundred years after her death. It is said that at her trial she was asked to recite the Lord’s Prayer in Gaelic, but she misspoke. This was proof of her guilt. The tourist trail sign near the stone claims that at her trial she testified with the clarity and pathos of a melodrama heroine: “I’ve tried to lead a good life, but my people are strangers to me now. My girl has a twisted hand and they whisper terrible things about us. Why do they hate us so?” As in the many cases of those accused witchcraft, their silence is greater than the fictions that have outlived them.

Henderson also points out that despite not having the authority to conduct a legal trial of the women, Sheriff Deputy Captain David Ross found both women guilty. He sentenced them to be burnt to death the following day. Her daughter escaped burning, but several accounts claim Janet Horne was stripped naked, covered in tar and feathers and paraded through the town. This is the version recorded on the tourist trail sign outside the grounds of the stone. The legend says she had tried to warm herself by the fire in the tar barrel, uttering, perhaps with dark humour or profound confusion that it was a “bonnie blaze”.  Unlike most of the accused who were strangled before they were burnt, the surviving story claims she was burnt alive.

Thomas Davidson mentions Janet Horne’s burning in a pitch barrel. In the same paragraph he quotes the Earl of Mar describing another instance of women being burned at the stake, claiming that though the women denied their guilt to the end, some died in despair while others broke out of the fire and were ‘cast in quick in it agane quilhill thay wer brunt to deid’.

The Witch’s Stone marks the place of her burning. It is domesticated and has its own little garden with a fence around it. The stone has a page on Trip Advisor as the Janet Horne Memorial Stone, where it is ranked number eleven out of twelve things to do in Dornoch. Some visitors have left reviews rating their experience (four out of five stars). One poster noted that the date is not correct on the memorial and adds, ‘a stone version of tippex isn’t available’. Other reviews read disappointment: ‘Not a lot to see’. While some contribute their sketchy knowledge of Scottish law: ‘witchcraft was still a punishable offence up to 1951, although you didn’t get burnt at the stake for it.’ 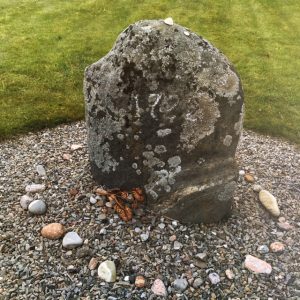 The Witch’s Stone of Dornoch / The Janet Horne Memorial StoneMy arrival in Dornoch was like any other tourist, and there were a lot. Families spoke with American accents, visiting shops and eating ice creams. I found my way using Google maps on my phone, where there is a pin for the stone. It’s located across from a quaint holiday cottage, and the grass is as green and even as the golf course across the fence. The swift breath of golfers teeing off, over and over, sounded like elfshot in the distance. The stone is surrounded by a gravel circle, and on the day I was there, someone before me had arranged rose petals, shells and pebbles in a circle surrounding the stone. Lichen has formed its own language over the monument. Phrases of black with minuscule dots of green and ruffled pink mark the stone like notes of an alien song. The date 1722 is painted in, but the lichen is winning and perhaps within another hundred years, it will cover it completely, erratum and all, with its silent music. 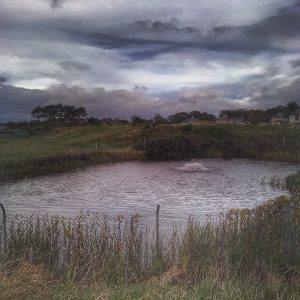 Up over the grassy knoll beside the stone lies the Witch’s Pool, now called the Royal Dornoch Pond. It’s adjacent to the 17th Hole of the golf course, surrounded by groomed verdant planes. Patches of wily cat’s ear grow in profusion, defying the herbicides of the Royal Dornoch course. The pool is dark and deep, contained within the fencing and barbed wire. In some accounts witches were ‘swum’ here, but according to the Survey of Scottish Witchcraft, there are no official records of this practice in Scotland. However, instances of vigilante ‘justice’, certain local trials, extra-legal proceedings or illegal ones, were not recorded. Wikipedia’s entry on ‘Drowning Pits’ claims that in Scotland medieval lairds had the power of execution and while men were hung, women were drowned. If there were no suitable body of water nearby, one was dug for the purpose.

Was this golf course hazard was once a place of torture and execution for witches or does its older name, the Witch’s Pool, come from some other history entirely? Certain bodies of water, and their attending narratives, persist in the imagination, as if collective memory were subsumed there. The nameless last witch, let’s call her Janet Horne, is the genius loci, the liminal lady of the lake, or the Cailleach of this borehole.

In summer the pond would stagnate. According to pitchcare.com, a trade website for the Turf Industry, golfers at the 17th Hole found it odious. In the centre an aerator has been installed so that the black water of the pool is perpetually churning and rippling. On a dark day, it would not be hard to see it like a hell-broth boil and bubble. The pool’s one million gallons of water are used to irrigate the golf course. A bright orange life-saver hangs on the fence, should anyone find themselves sinking into its depths again.

On my way home, I kept thinking about Janet Horne’s daughter, the nameless one that got away. The Countess of Sutherland’s account of Janet Horne to Sir Walter Scott claimed the daughter’s grandson still lived in her family’s estates. She says that he had the same deformity in his hands and feet. Perhaps Horne’s daughter lived long enough to have children who returned to or remained in the place of their mother’s torment.  So much of our women’s history was unwritten. Often, as in the case of Janet Horne, ill-fitting fictions exist in their place. How unsatisfying are these embroidered scraps, penned by men who indulged in base sentimentality. I kept laying a new story over the silence of the old, answering my own questions. How did Janet’s daughter escape? She, like us, survived this history. Did she try to free her mother, too, or did she just run? Was it the kindness of strangers or her own cunning that set her free? What about revenge, did she think on it at all, and what would it have looked like?

We need to talk about witchcraft. That’s not a demand: it’s an observation. As a historian who studies Scottish witchcraft, I find in conversations that people don’t ask me what I know about it; rather, they’re keen to tell me what they know. For instance, I’m often told that witches were ducked in Edinburgh’s North Loch. Even more […]

Robert Burns’s Tam o’ Shanter, published in 1791, is the most famous Scottish poem about witches. In it, Burns narrates the drunken Tam’s comical encounter with a witches’ sabbat. The pacing is adroit, the grotesque imagery memorable. It’s a Romantic work, with the spooky ruins of Alloway Kirk at its centre; Burns was asked to […]

In Search of Isobel

Are there side effects from reading novels? Or from writing one? For the past two years a part of me has been living in seventeenth-century Scotland, and as my plane touches down in Glasgow, I half expect to see a stampede of wild-haired Scots on horseback to a soundtrack of bagpipes. I’ve been writing a […]

‘The Shadow of the Black Earl: a Leo Moran Murder Mystery’ by Charles E. McGarry

Charles E. McGarry’s second crime novel, The Shadow of the Black Earl, adds a supernatural twist to Scotland’s detective scene. Leo Moran, the protagonist, a private detective from Glasgow, visits Biggnarbriggs Hall after the death of a friend. The country hall belongs to Leo’s close friends, the prestigious Fordyce Greatorix and his sister Evelyn, setting […]