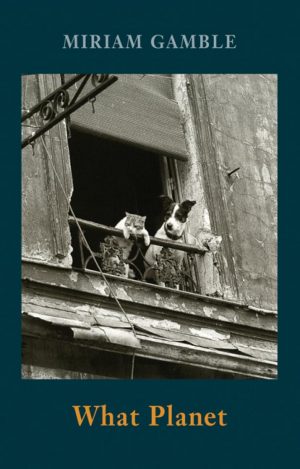 Miriam Gamble’s third collection of poetry, What Planet, published by Bloodaxe Books, follows in the footsteps of her two previous collections The Squirrels Are Dead (2010) and Pirate Music (2014). Born in Brussels and raised in Belfast, Gamble studied at Oxford and Queens University and today lectures in creative writing at the University of Edinburgh. In the last few years, Gamble has won a string of awards for her poetry, including the Eric Gregory Award in 2007, the Somerset Maugham Award in 2011 and the Vincent Buckley Poetry Prize in 2012.

What Planet is divided into five sections and contains a total of forty-six poems. A quotation from Claudia Rankine’s bestselling, genre-bending 2014 book Citizen: An American Lyric prefaces the book: ‘If this is not the truth, it is also not a lie’. It is clear that Gamble’s third collection is going to deal with ambiguity and contradiction. The line is emblematic of today’s post-truth culture, while also bringing to mind riddles and paradoxes. Gamble’s epigraph omits the preceding line of the quotation, ‘Memory is a tough place. You were there,’ playing with the distinction between memory and forgetting, and absence and presence, all of which cut through What Planet.

‘The Landing Window is Unspeakable’ is the first poem in the collection and sets the scene for what follows. The first stanza reads:

There’s a turn in the stairs beyond which,
in the darkness, you are terrified to go –
the realm of the creaking life which somehow carries on
when everyone is out cold and unable to witness it. (11)

Immediately, the reader is confronted with a sense of the uncanny as a child is frightened by the darkness in her home, ‘woken foxed by the dimensions of the house’ (11). As ‘The Landing Window is Unspeakable’, and yet is the focus of the poem, the second poem, ‘The Oak That Was Not There’, is haunted by ‘the blasted oak’ (12). Alienation, dreams, memory and existing in liminal spaces characterize What Planet. In ‘The Oak That Was Not There’, the repeated line ‘the clocks went forward, the clocks went back’ (12) places the reader in a between-world. In the notes at the end of the book, the title of the poem ‘Samhain’ is described as ‘a liminal time at which the boundaries between worlds are abnormally traversable’ (79); Gamble guides us through these liminal spaces.

Gamble’s previous collections, particularly The Squirrels Are Dead, interrogated non-human and human animal relations, and the preoccupation with animals in What Planet begins on the front cover of the collection. A cat and a dog sit side by side, peering down from an opened window to something unseen beyond the frame of the picture. Within the text, ‘Crane Fly’ documents the eponymous insect trapped in a spider’s web; in a ‘Mare at Large’, a horse escapes one field for another (‘she isn’t minded to be caught’); and in ‘Parotia Displaying in a Forest Clearing’, a bird of paradise performs its mating dance, a ‘defrocked cleric / hiking skirts and jigging to the song Satanic’ (36).

Gamble’s poems are dizzyingly interconnected, with words, phrases and motifs rippling throughout the collection. As well as being self-referential, the poems are intertextual, with some directly responding to other literary works. ‘Odradek Returns’ references the impossible creature from Kafka’s ‘The Cares of a Family Man’, while ‘Wonderland’ responds to Lewis Carrol’s Alice books. ‘Feldspar’ is Gamble’s response to ‘Coastal Walk: Islay’ by Mark Ogle, for which she was awarded the 2018 Mark Ogle Memorial Award: it is from a line in ‘Feldspar’ that What Planet takes its name.

Gamble’s play with forms demonstrates her awareness of tradition: the collection features lyrics, prose poems, concrete poetry and a sestina (a complexly structured poem comprising six six-lined stanzas with the end-words repeated in a specific order). Gamble’s sestina ‘Betty Staff’s’ is based on the poet’s grandmother, an all-Ireland professional ballroom dancer who owned a dance studio in central Belfast. The first stanza is:

In retrospect it turns out that her bouncer was like an octopus
nimbling across the floor to take his fill from the bar
perched back sweetly at his post
before a body would think to look. It’s the 1950s,
so she doesn’t have cameras on the door or on the dance floor.
He flashes his teeth, parades the tart liquor on his breath (26).

The end-words ‘octopus’, ‘bar’, ‘post’, ‘1950s’, ‘floor’ and ‘breath’ are repeated in a rhythmic cycle and serve to mesmerize the reader (as many of Gamble’s poems do), while conjuring images of dancers revolving and circling around the dancehall floor. Furthermore, the repetition of words forges poignant connections, such as ‘floor’, which at the beginning of the poem denotes the dance studio, but in the final three lines of the poem describes the ground to which her grandmother falls as her husband strikes her: ‘more than once he will knock her to the floor, and free of breath.’ At times the structure of the sestina struggles to hold its form, such as when ‘octopus’ becomes ‘puss’, and ‘post’ becomes ‘post- / pub’. But stoically it perseveres, as if to say ‘the show must go on’.

The themes that permeate Gamble’s collection are summarized in ‘The Canal at Fountainbridge’: ecology; reflection; memory; and poetry. The final three lines suggest the potential violence of readers and critics trying to make sense of the poet’s memories and creations:

Here is ecology, here is the furtherance
of education, bright school climbing the sky,

its every out-facing surface a mirror.
Here are the Spanish boys drumming up

lonely salsas, a twirling glitter-ball, twigs
rubbed in the night. Here is the scurf

of the past, the clean scalp of the future.
Here is a landscape like the head

of an orator, meticulously shuffling
through its show of slides –

what is to be kept, and what forgotten,
and in what order. Here is health,

affixed to the careful management
of those weeping borders.

And here your own small past,
abstracted from it in a box
others will smash and squeeze. (50–51).

Gamble’s vocabulary is copious and her play with forms demonstrates the depth of her knowledge of tradition and the potential for adaptation. What Planet is a heady journey through the spaces between dreams and reality, human and non-human worlds, past, present and future, and interrogates home, displacement, and ecology. You can listen to Miriam Gamble reading some of the poems from the collection on Bloodaxe Books’ Vimeo page.

What Planet by Miriam Gamble is published by Bloodaxe Books, 2019.