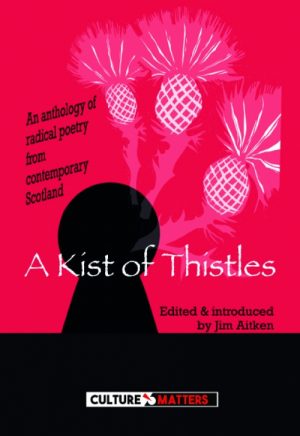 There are a variety of approaches to curating anthologies of political poetry. Some gather material from across a spectrum of perspectives and beliefs, attempting (though rarely achieving) an unbiased snapshot of political thought at that moment. Others explicitly take a stance, eschewing any pretence of neutrality and proudly championing certain causes. A Kist Of Thistles is the latter: published by Culture Matters, the anthology gathers ‘radical’ poetry concerned with ‘ordinary people.’ Many of the poems are voiced by and addressed to the oppressed: ‘the underdog poor like you and me,’ as Julian Colton frames it in “The New Petite Bourgeoisie.” Editor Jim Aitken’s introduction posits that to be neutral in today’s fractious, unjust world is itself a political choice: in this context, ‘radicalism is normal and natural.’

Such an outright stance – however ‘natural’ and understandable – might raise concerns that this anthology would be one-note, advancing a singular agenda and voice. Yet here are collected a multitude of poets sharing wide-ranging perspectives, imagining different futures (and pasts), and speaking many different tongues. This is not a univocal manifesto offering simple solutions or projecting an uncomplicated, romanticised vision of Scotland. Instead, by picking at the seams of identity, history, and tradition, the poems gathered here trouble pre-conceived notions with nuance and insight.

Threaded through this anthology is a pulsing frustration with corruption, deceit, and the abuse of power: an eloquently expressed anger characteristic of much of Scotland’s political discourse of the past several decades. A Kist of Thistles is not the only recent attempt to document this energy: in previous years several publishers have released anthologies of contemporary Scottish political verse, each with unique editorial approaches (these include Inspired by Independence [2014], Scotia Nova [2014, updated 2015], and Aiblins [2016]). What chiefly sets this text apart is its length: at 105 poems (by 62 poets), it is roughly double the length of its predecessors. It also features black and white illustrations by artist Fiona Stewart which strikingly accentuate the poetry.

A Kist of Thistles is divided into three sections of roughly the same length: Home (poetry concerned with Scotland), Abroad (poetry regarding other nations and international ties), and Elsewhere (poetry addressing broad issues, less rooted in specific locations). While it is helpful to break up such a large text, the divisions can feel somewhat arbitrary, with sections blurring together. After all, given today’s globalisation it is difficult to clearly divide Home from Abroad or Elsewhere, and the fluidity of the boundaries between each section underscores Scottish poetry’s international outlook. As the focus shifts from the closely local (“Not Nuart Aberdeen,” Olive M. Ritch’s lament for those who have committed suicide from Union Street bridge) to the global (“Feather,” Kate Armstrong’s poignant ode to the unjustly imprisoned), we are reminded of the personal implications of universal issues.

While one might expect a contemporary Scottish political poetry anthology to be glutted with material concerning the constitutional question, A Kist of Thistles refreshingly stretches beyond the binary of a Yes/No vote (and indeed this single issue) to represent a broad range of topics. Certainly there are passionate arguments for independence (and, if not any explicitly pro-Union poems, some cautionary lines); yet there are also poems on the climate crisis, homelessness, sectarianism, global conflict, poverty, racism, sexual violence, child abuse, migration, corruption, and many more issues. Generally poems on similar themes are gathered together, allowing for various facets of an issue to be explored and preventing the anthology from feeling too disparate. Sometimes this approach reveals startling common motifs threading together certain subjects. For instance, when Henry Bell’s monologue “We Were Being Good” on the sectarian legacy of Glasgow football is followed by Anne Connolly’s “Fill, Fill a Rún Ó,” on ‘the politics of faith,’ we can’t help but notice that both poems describe followers of one camp spitting on followers of another (literally, in Bell’s piece): a visceral depiction of disdain.

The question of what exactly constitutes a ‘radical poem’ – or political poetry more generally – is an ambiguous one, and A Kist of Thistles defines this category broadly. The pieces featured range from ranting polemic to melancholic reflection to incisive satire. It is often the poems that would not immediately be characterised as ‘political’ that are the most powerful: those which focus intimately on a single narrative or detail of the landscape to illuminate the whole. Such a poem is Peter Godfrey’s “The Sacred Breakfast,” which unsettlingly undermines its idyllic description of a quiet dawn meal at Faslane Peace Camp with a reminder of the nuclear warheads constantly threatening the scene.

An undercurrent running through A Kist of Thistles is the pull to compare present with past – to draw parallels between previous injustices recognised as stains on history and contemporary blights yet to be redressed. George Colkitto’s “Swinging on a State Gibbet” explicitly compares the ‘casualties of a new economic order’ – DWP assessments, zero hour contracts, and other systems seemingly fating citizens to poverty – with antiquated public hangings which left ‘the body to rot until a skeleton / a warning of state retribution.’ Similarly, Chris Boyland’s “The City” emphasises history’s cyclical nature, warning ‘we have seen all this before.’ Throughout this anthology, poets wrestle with the complex legacies of the past, questioning how to negotiate the guilt, trauma, and loss inscribed in national memory and land. Several pieces navigate the thorny issue of Scotland’s complicity – and agency – in colonisation. The sharpest of these is Gerda Stevenson’s “Statue of a South African Woman and Child,” which powerfully critiques the performativity of erecting memorials to anti-racists given the UK’s long-standing imperialism.

Any collection of contemporary political writing is inherently of its moment: it captures what poets are moved to write about at that time, how they refract the headlines into verse. Inevitably this means that some of the work is intensely topical and risks feeling dated soon after the anthology’s publication. This may be the case for the several poems directly referencing the ‘new guy with the orange hair,’ as Geraldine Gould describes the current American president, although only time will tell which poems (and political legacies) retain their power in the long run.

Stylistically, A Kist of Thistles is arguably less radical than its content: much of the poetry is written in free verse, with relatively little formal experimentation. An exception is Edward Mackinnon’s “Unlawful,” which assumes the language and structure of an official inquest to compellingly narrate a young soldier’s needless death. Still, though, there is a range of tones and modes of address – from the conversational to the clipped – which keep the anthology from drifting into monotony. And the variety of languages in which these poems speak – including Gaelic, Scots, and Shetlandic – not only reflects Scotland’s rich linguistic diversity but facilitates innovative cross-language play, such as in Peter Mackay’s vivid Gaelic and English piece(s) “Geographical Exclusions Apply.”

Political verse is arguably most radical where it twists common images, phrases, and slogans to reveal nuance and encourage a new perspective. Although many pieces in A Kist of Thistles achieve this through flipping stereotypes on their heads (Hugh McMillan’s clever opening piece “Address by the Haggis” included), there are some instances where the language more reiterates cliché than provokes thought. These are poems which pit Scotland the ‘innocent and pure’ unicorn against England’s ‘proud lion’; tropes of Scotland as female which do not interrogate this gendered approach to imagining land; portrayals of unanimous pro-independence belief which bely the more complex reality. Such relatively simplistic depictions of nation are in the minority, however, and the bulk of this anthology rejects well-worn rhetoric to turn new, thought-provoking pages.

Fittingly, the final poem in A Kist of Thistles, Colin Donati’s “grand for the hairst,” emphatically repeats the term ‘radical’ so many times it becomes effectively meaningless. This conclusion invites us to reflect: what is meant by ‘radical’ when the goalposts of political theory, action, and rhetoric are constantly shifting? How can contemporary political poetry harness, convey, and retain radical energy and power? This anthology provides plenty of evidence that today’s Scottish writers are up to the challenge. Particularly in this year marked by isolation and despair, the eloquent activism shot through this A Kist of Thistles proves that Scotland’s long tradition of weaving resistance into verse is alive and kicking.

A Kist of Thistles is published by Culture Matters, 2020.