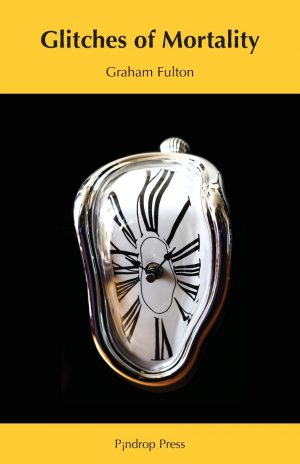 Graham Fulton (b. 1959) has been a poet, a publisher and a live performer for over three decades. Born in Hampton, Fulton moved with his family to Paisley in the early 1960s. He had a prolific 2018 – Glitches of Mortality (his sixteenth collection of poetry) is one of four books he published that year, alongside Flesh and Stone (Controlled Explosion Press), Something Good Will Always Happen (Penniless Press), and Circulation (Clochoderick Press). This collection is dedicated to Fulton’s fellow Itinerant Poets Jim Ferguson and Bobby Christie, and is divided into three sections, ‘First Glitch’, ‘Second Glitch’ and ‘Last Glitch’, comprising 65 poems. The glitches found in Fulton’s poetry occur when everyday life is interrupted by a surge of poetic insight: trips to the supermarket, journeys on public transport, drinks in the pub, and a lost earring are a few examples of the seemingly day-to-day circumstances that Fulton inverts and elevates in this funny and poignant collection.

Like his erstwhile mentor Tom Leonard, Fulton’s poetry insists on the universality of local experience. Paisley is the setting, and its people the protagonists, of several of the poems in Glitches. The collection opens with ‘System’, a poem that follows ‘two people in anoraks from Paisley’ who are bewildered to find

Fulton’s poetry alludes to the shifting landscapes of his hometown and the erasure of traditional working-class culture without moralizing, and also succeeds in defamiliarizing his local area to the extent that it becomes a different planet with alien(ated) residents. The anoraked audience inspect the instructions on the exercise machine:

as they touch the pristine diagram
of an ideal human being like the one
sent on a lonely probe
to show the baffled inhabitants
of some distant system
what we look like.

Specific Paisley sites form the backdrop to ‘The Anchor Snails’, ‘Dunn Square’ and ‘Saucel Hill’. ‘The Anchor Snails’ sees a moment of reflection in the shadow of the town’s historic Anchor thread mills as the speaker narrates the journey of ‘A quartet of four-inch snails / without shells / or slugs’ as they thirstily make their way ‘across the pavement / as wide as a desert’, arriving at the poem’s conclusion that takes quiet pleasure in the machinations of life ‘as they serenely follow / the journey of their lifespans’ (the sheep in ‘Sheeps’ are similarly ‘wandering through their gentle routines’). In ‘Dunn Square’, Fulton turns his gaze to the gardens at Paisley Cross and the ‘statue / of a woman / naked from the waist up / with her erotic bronze tits / anointed with / pigeon shit’. But no one else pays attention to the statue ‘as they sweep past / on their way to Argos’. Even the child on the woman’s left shoulder is ‘looking towards / the Clydesdale Bank’. ‘Saucel Hill’ is the longest poem in Glitches. In it, Fulton finds beauty in ‘the bits of broken Buckfast / scattered over the grass / sparkling’ and warmly surveys the urban environment of Paisley, but this is checked by the acerbic assertion that ‘perspectives warp / at this height’.

Fulton has the gift of playfully blending ‘high’ and pop culture: in ‘Larkinesque’, the speaker is ‘more concerned / with the Welsh competitor / of Chinese descent on MasterChef / called Larkin’ than with the author of The Whitsun Weddings, although the poem begins bleakly: ‘it’s a brutal cosmos, we die and we’re gone’. 2001: A Space Odyssey, The Invisible Man, Twelve Angry Men, and Apocalypse Now are some of the films to which the poems in the collection respond. In ‘Jane Hair’, Bertha (Charlotte Brontë’s ‘madwoman in the attic’) is replaced by ‘the woman who walks the corridors / of our special residence / at midnight / and dawn / and all the time in-between / like Rochester’s doolally bride’. ‘There’s No Need for Swearing in Poetry!’ pokes fun at the canon, and sends up the divergence in registers between swear-word-speckled speech and the works of Tennyson, Wordsworth, Keats, Eliot and Shakespeare, creating comical mash-ups like:

As well as bringing together different discourses to humorous effect, the poem also subtly interrogates the potentially sexist treatment of women in canonical poetry:

The question of what constitutes appropriate poetic language is also taken up in the poems written in Clydeside Scots. In ‘This is Thursday’, an overheard speaker negotiates a phone call: ‘hear mi oot Kevin will yi jist hear mi oot / yir drunk    yiv bin drinkin since Sunday […] am fed up bein used az a punchbag a canni take it’. In ‘Paisley to Glasgow Ten in the Morning’, someone ‘totally fuckin steamin’ is not allowed off the bus until they retrieve their lost ticket. While it is welcome in these poems to have the authority of ‘standard’ English interrogated in the same ‘Good Style’ as Leonard, it is ambiguous whether the substance and domestic abuse references are an astute assessment of working-class social problems, or whether they contribute to the stereotype that casts aspersion on people who speak this way.

The glitches of the book’s title give pause, momentarily staving off impending death, and these disturbances manifest in the content, form and style of the poems. For instance, in ‘The Castle by Franz Kafka’, the speaker reads the same sentence repeatedly while distracted

The poems also literally give pause. The cover of the collection is a melting clock in reference to Dali’s The Persistence of Memory, suggesting the surreal nature of the glitches to be found in the book, as well as the theme of broken, halted, and imagined time. In ‘Clock in a Shop’, ‘there’s a large clock / propped against the wall / with the time stopped / at twenty-two minutes to seven’, while in the eponymous ‘Glitches of Mortality’, the speaker takes a watch whose battery is died into the InShops of Paisley. The poet reckons that he ‘won’t get any older / My organs won’t rot / my head won’t collapse / more than it stupidly already has / My heart / won’t surrender itself / to the past.’

The poems are generally comic in tone, but this makes those that are not primarily humorous all the more affective. In ‘Chloe and Huw’, the poet mourns ‘The baby we never had’ who

would have been born in January or May
at three in the morning.

would have been called Chloe
if she was a girl,
and Huw
if he was a boy.

Fulton belongs to a contemporary Clydeside canon that is characterised by a darkly-tinged surreal and absurd humour that counterpoints moments of seriousness and ripples out from ostensibly everyday experiences, elevating them to profound heights. In this sense, his poetic vignettes can be likened to the short stories of Chris McQueer and Limmy’s TV and internet sketches. Glitches of Mortality will appeal to new readers as well as those already acquainted with Fulton’s distinct, thoughtful and hilarious brand of verse.

Glitches of Mortality is published by Pindrop Press, 2018.

‘What Planet’ by Miriam Gamble

Miriam Gamble’s third collection of poetry, What Planet, published by Bloodaxe Books, follows in the footsteps of her two previous collections The Squirrels Are Dead (2010) and Pirate Music (2014). Born in Brussels and raised in Belfast, Gamble studied at Oxford and Queens University and today lectures in creative writing at the University of Edinburgh. […]

The blurb of Nameless Country states that Arthur ‘A. C.’ Jacobs was ‘a Jew in Scotland, […] a Scot in England, and [..] a diaspora Jew in Israel, Italy, Spain and the UK.’ Born in 1937 to Orthodox Jewish Lithuanian parents in the Gorbals, Jacobs spent much of his adult life travelling. The complex, intersectional […]