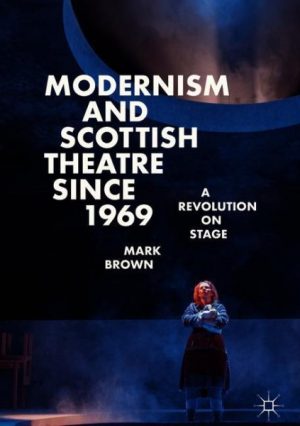 In Modernism and Scottish Theatre since 1969: A Revolution on Stage, Mark Brown, according to his publisher, argues that ‘Scottish theatre has, since the late 1960s, undergone an artistic renaissance, driven by European Modernist aesthetics’. The established narrative, of course, is that various factors have driven Scottish theatrical renaissance since the 1960s, including the impact of the annual Edinburgh Festival, the 1963 foundation of the Traverse Theatre, and the influence of newly-arriving artistic directors like Clive Perry (Royal Lyceum, Edinburgh), Giles Havergal (Citizens Theatre, Glasgow), Joan Knight (Perth), and Stephen MacDonald (Dundee). Within this renaissance, Brown emphasises ‘European Modernism’, defined as including almost all early twentieth-century theatrical innovations. An odd omission in his discussion of modernism is the absence of any reference to its earlier impacts on Scottish literature in general as outlined by, for example, Margery Palmer McCulloch in her landmark Scottish Modernism and its Contexts 1918–1959: Literature, National Identity and Cultural Exchange (Edinburgh University Press, 2009). This is a startling absence: Nancy K. Gish describes McCulloch’s study as ‘most valuable for Modernists’ because of it ‘astute analysis of the ways Scottish Modernists developed distinct, if parallel, techniques with culturally specific materials and sources’, so staging ‘a major challenge to traditional analyses of Modernism and a significant intervention in the ‘The New Modernism’ of the past decade’.1 As a result, Brown’s discussion is surprisingly narrow with regard to the Scottish, while being overly general with regard to the European, context of his interest in modernism. Perhaps because of his Scottish lacuna, he argues as if the modernist techniques he defines rather loosely were new to Scottish culture.

Nonetheless, Brown makes a case that modernist techniques are particularly seen in Havergal’s directorial practices and had a powerful creative impact on his chosen theatre practitioners’ dramaturgy. These include Gerry Mulgrew (Communicado Theatre Company); current Citizens Theatre Artistic Director, Dominic Hill; playwrights David Greig, Zinnie Harris, David Harrower, and Anthony Neilson (whom he considers to be a ‘golden generation’ (43) comprising the ‘finest Scottish playwrights […] of any generation’ (113); and auteur Stewart Laing, who actually worked with Havergal. Brown dismisses a parallel developmental strand in contemporary Scottish theatre – work by companies like 7:84 and Wildcat – as ‘Agitprop’ with no long-term impact. Such dismissiveness reflects Brown’s central argument there was no significant theatre in Scotland before 1969, and – outside of Havergal and Mulgrew – before 1990, and that what matters thereafter is his selected practitioners’ work.

Chapter one defines key terms and identifies the modernists whom Brown, applying the term to cover most post-naturalist theatre practitioners, sees as having generally influenced twentieth-century theatre. Chapter sections cover Brecht, Lecoq and Howard Barker whom he nominates as key figures – Barker disputably – in the development of modernist theatre. Chapter two introduces his primary theme – his subtitle is ‘A Revolution on Stage’ – the impact on Scottish theatre of European Modernism in his wide-ranging definition (which, nonetheless, ignores earlier aspects of Scottish modernist practice). While he recognises other contributions to contemporary Scottish theatre, both institutional like the Edinburgh Festival or individual in the case of such figures as director/playwright Bill Bryden or children’s theatre pioneer Gill Robertson, he asserts the primary importance of the modernist and avant-garde aesthetic of the Citizens Theatre the third chapter discusses. Brown argues there that Havergal’s work, with Philip Prowse and Robert David MacDonald, equated in Scottish theatre to Robert Hughes’s famous art historical ‘shock of the new’ (46), their immediate successor after 2003, Jeremy Raison, falling away from this modernist standard – Brown calls his directorship an ‘interregnum’ (74). His successor from 2011, Dominic Hill, ex-director of Dundee Rep Theatre and the Traverse, Brown views as showing ‘commitment to classics, from the Renaissance to Modernism’ (77–78), in effect continuing earlier Citizens’ priorities. Chapter four concerns Gerry Mulgrew’s Communicado and its ‘Popular Experimentalism,’ typified for Brown by ‘a passion for modern European theatre and a notable regard for Scottish culture’ (91) with a focus on political radicalism. The longest chapter, five, consists of interviews with his five post-1990 ‘golden generation’ practitioners, discussed in more detail in the next paragraph. Chapter six reads the work of the National Theatre of Scotland, emphasising its co-productions and use of non-theatre spaces, in the context of European Modernism. Paying tribute to founding artistic director Vicky Featherstone, Brown predominantly foregrounds work derived from contemporary European dramaturgy while recognising such successes as Black Watch (2006), which arguably fits his ‘Agitprop’ category. The last chapter speculates on Scottish theatre’s future, perceiving a shift from text-based to performative practice alongside a decline from the standards of his ‘golden generation.’ Here, Brown emphasises Scottish theatre’s long-established internationalist outlook and openness to non-traditional modes of theatre-making. He sees auteurs – as distinct from playwrights – shaping Scottish theatre’s future.

An experienced newspaper critic, Brown often turns telling phrases, vigorously pursuing his argument that nothing was of value in Scottish theatre before 1969. His production discussions, vividly descriptive rather than analytical, convey a journalistic sense of ‘being there’. The interviews convey enthusiastic admiration, drawing out responses about specific examples of the interviewees’ work. The transcriptions, however, do not reveal consistently structured research interviews, but conversations launched by leading questions or statements seeking affirmation of Brown’s Modernist thesis. Several interviewees, in fact, resist his identifying them as modernist: Harris, Harrower, and Neilson actively reject such characterisation; Brown imposes his preconceptions rather than testing them. Meanwhile, he ignores playwrights like C P Taylor, whose Columba (1973) and Good (1981) reflect a modernist influence, although Taylor’s wider playwriting practice, like other Scottish playwrights before and since, extends beyond mere modernism.

Brown’s preconceptions include dated misunderstandings of Presbyterian relationships to drama and theatre. He contends that ‘Calvinism’ long suppressed theatre in Scotland, primarily quoting the poet-playwright Liz Lochhead in support. Scholarly consensus over the last thirty years disagrees. Terence Tobin, Alasdair Cameron, John McGavin, Sarah Carpenter, Greg Walker and Gioia Angeletti, for instance, none of whom Brown cites, have published research on an actively theatricalised culture after the 1560 Scottish reformation, despite some decades of suppression in the seventeenth century. Across Scotland, for centuries, the Kirk required schools to produce plays at least annually. Margo Todd reminds us that Calvinism is not Stalinist, but various: many Scottish Enlightenment leaders were Presbyterian ministers. In The Culture of Protestantism in Early Modern Scotland (2002), Todd notes, ‘Where a heavy hand might have strengthened the opposition to Reformed doctrine as well as discipline, the elders’ sense of the inutility of quashing the useful and harmless allowed for a more gradual but secure cultural reconstruction’ (221).

To sustain his argument, Brown sometimes misreads recent research. He cherry-picks Barbara Bell’s comment on the weakness of the patent house system around 1800 in her contribution to Bill Findlay’s magisterial 1998 A History of Scottish Theatre. Yet he neglects her references to an active touring theatre scene demonstrated by the career of actor and Scots/Gaelic/English-language playwright Archibald Maclaren (1755–1826), and ignores her extensive discussion of the National Drama, the nineteenth-century-long tradition on which she is expert. Mentioning my own work on Scottish theatre’s hidden history, he asserts that ‘hidden’ signifies there was really no such tradition. ‘Hidden history’ is a historiographical term, widely understood to refer to material which exists, but for whatever reason has been neglected and is being rediscovered: Germaine Greer’s work on Renaissance women painters is a famous example. Such misunderstandings, though primarily evident in chapter two’s ‘An Historical Note,’ recur.

Further, to support his denial of substantial Scottish contributions to theatre before his ‘golden generation’, Brown problematically removes key figures from history even in chapter two. George Buchanan’s Scoto-Latin Senecan tragedies (c. 1540), arguably Europe’s most influential plays by any Scottish playwright, importantly influencing French neo-classical drama, are ignored. He questions the standing of David Lyndsay’s Thrie Estaitis asserting it does not qualify him for ‘a place in the pantheon of northern European playwrights [Strindberg, Ibsen, Synge, Wilde, Shaw, O’Casey, Beckett]’ (33). Moreover, this ‘pantheon’ – a term better used in architectural discussion than modern critical debate – omits, among others, J M Barrie, whose long-term worldwide theatrical impact is incontrovertible. The historically important Scottish playwright and innovative theatre entrepreneur Allan Ramsay (1686–1758) is similarly unmentioned. This is a pity: Brown’s case for the importance of recent Scottish theatre does not need such counter-historical omissions.

Occasionally, Brown is simply factually inaccurate. Jim Haynes was not the Traverse’s founder director; Terry Lane took up post in 1962 before its January 1963 opening. He talks of playwrights he does not favour as using an ‘idiolect’, by which he appears to mean Scots language, one of Scotland’s three older languages alongside Gaelic and English. But everyone, by definition, including a modernist, has an idiolect. A good naturalist playwright may even achieve a sense of characters’ individual idiolects, as Zinnie Harris does triumphantly in Further than the Furthest Thing (2000). Moreover, the existence of Gaelic-language drama should be acknowledged, especially Fionnlagh MacLeòid’s 1963 modernist Ceann Cropic. Misreadings and omissions undermine the book’s methodology. Consequently, it reiterates an older long-standing miserabilist version of Scottish history that cultural scholars like Murray Pittock and Cairns Craig, not to mention Bill Findlay, have done much to dissipate.

Brown’s enthusiasm for recent work certainly undervalues the Scottish theatrical tradition in order to promote his selected subjects’ significance. They need no such special pleading: he offers an engaging introduction to a group of contemporary practitioners that, apart from Havergal, Greig and Neilson, have been generally neglected in current scholarly discourse. I, therefore, commend this book – despite a general lack of academic rigour – for its eloquent advocacy of an interesting strand of contemporary Scottish theatre.

Modernism and Scottish Theatre since 1969: A Revolution on Stage is published by Palgrave Macmillan, 2019.

Every few years Lorna Moon surfaces in the Scottish literary consciousness. This recurring ‘resurgence’ has been propelled either by the advocacy of critics such as Margery Palmer McCulloch, Carla Sassi and David Toulmin, who were fascinated by her work in terms of feminist, modernist, regionalist and nationalist interests, or through media projects inspired by her […]