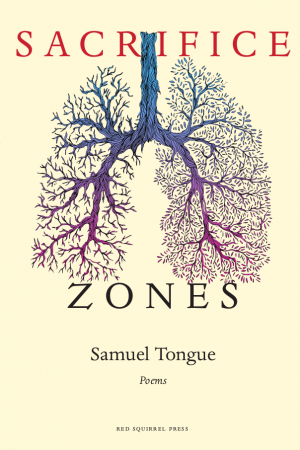 Sacrifice Zones published by Red Squirrel Press is the ambitious and gratifying first full collection from award-winning poet Samuel Tongue; it follows two previous well-received chapbooks Hauling-Out (Eyewear 2016) and Stitch(Tapsalteerie 2018). The collection explores questions of religion and sacrifice through poems grounded in close environmental and ecological observation underpinned by exuberant liminal metamorphosis. Tongue’s other life as a lecturer in Theology and Religious Studies at the University of Glasgow provides a mordant rigour. The collection title itself outlines its scope: it is a term defined as a geographic area permanently impaired by environmental damage often found in low-income and minority communities. Naomi Klein clarifies in a quote prefacing the collection that we, as a community, are prepared to make a moral judgement to accept loss or degradation for some – the “black lungs of the coal miners or the poisoned waterways surrounding the mine” – for what we perceive as overall gain.

In Sacrifice Zones our whimsical readiness to redefine the world around us and restructure its “meshwork and mess” to suit ourselves is teased out and worried at: for example in the poem “A view of the small isles with electricity pylons”:

Everything can change direction: the bees at the salvia
are newly political and the swallow swerves
into the gnat like a current jumping its cable.

I had just read Kathleen Jamie’s book Sightlines when I first read the collection and its essays provided a useful thematic and technical parallel. In Jamie’s “The Hvalsalen” she visits the whale hall at the Bergen Natural History Museum in Norway and works some of her magic to reset the whale skeletons hung there – even as they are being restored by museum staff – and our view, our way of seeing ourselves in relation to the whales and in this world we share. Like Jamie, Tongue rearticulates close reading of animal and environment challenges. Like the viewer’s stance in the whale hall, we are implicated. Indeed human is so very close to animal in the collection that convict can become kangaroo in the poem “Not Government Issue” and in a quasi-shamanistic transformation the first action is to lick away existing relationship identifiers:

A long tongue slides between his teeth, licks
his blue tattoos, tasting ink. There was a woman
once, a child too – their names smudge under his hot rasp.

At the same time, a call for empathetic understanding can come from the other – the bestial – side: the much maligned Beezlebub’s pup in the poem “A Tasmanian Devil speaks to a settler”:

But today I roll in the sun like
any hot-blood, fur-honeyed in the right light.
I bleed red when skinned. I can be afraid of the dark,
of your hound’s cruel bark and high stink.

Yet what can the poet tell us by tilting perspective? Viewpoint shifts like the tide. As Marianne Moore point outs of the sea in her poem “The Grave”:

Tongue navigates the frailties of the human witness: in poems such as “Practical uses of the whale”, a soldier remembers his care of the night before as his colleague is blown apart; and in “Quint’s evidence”, its protagonist’s fishy tale dives into alcoholism. The recurring theme of cross-species identification swings into something madder and darker: we see gulls who “laugh down the chimneypots” until street is seashore in the full-throated “What is it like to be a herring gull”. The retelling of a Cheyenne/Navajo legend of Coyote “It’s long been on trend to turn your eyes into an I …” enables the poet to assume many forms of new eye/I while joyfully riffing through animal viewpoints. The poet transmigrates the very shape of things human, vegetable and animals in “Mountain Hare”:

today, i catch a mountain hare in its form under frozen fists of bracken, eating the last of the snow. as if eating the snow will keep it white.

This poem also features one of the many lovely shifts throughout the collection between form and free verse which echo the sense of perceptive dislocation.

And there is much to savour from the austere animal trials sequence to the pleasing inclusion of machine, technology and data. In “Carhenge”, commodity is already returning to earth:

New car smell rammed into the roadbed until it stinks
of the earth’s gut: muddy leaves, wet dog, plum-cake.

Its final lines “these are ugly gods – bitter in stomach, black in the lung” pick up the motif of Klein’s quote; underlining the collection’s dogged questioning of the creed we have defaulted to in an apparent absence of formal religion. Whirling through prehistory to the First World War and from Cambridge Analytica to the intimate space of tick removal, occasionally this voracious naming is stretched to its limits: for example, the anthropological boundaries of toilets in Homosocial and Piss Christ; and its focus on past Australian environmental disasters left this Australian reader wishing for contemporary references such as the Bimblebox Nature Refuge currently battling a coalmine landgrab which has received attention before from Scottish poets. But it is animal lives and trials that recur most vividly through the collection. There are three poems that deal with this topic explicitly; “Statement from the trial of the weevils of St Julien”, “Quint’s evidence”, and “The Sow of Savigny-sur-Etang”. These poems pull back the law’s service to human causes even in the face of blind faith. Quint as mentioned above is himself on trial. The eponymous pig of the final poem of the three especially exposes our setting of legal limits on our surroundings in all its contrariness as an act of faith: the sow’s conviction and death in the last poem provides non-human fetishes in the shape of the stones that tumble from her sliced belly. “We all keep one close now”.

The collection starts as it finishes with a ribbon of poems connected by belief. In the opening poem “Theology”the poet had prayed “that God won’t find me” but he makes a last oblation in the poem “Capel-y-ffin” – translated as Chapel at the end:

Every time the sow farrows
into the thrown straw, we must offer
one hard piglet to the waiting legion of foxes.
The cold disk of its nose is a coin.
I lift it up. It buys us time.

But as its title suggests, like Jamie’s whales and Moore’s ocean, life cannot be objectivised and made separate. Each time we sacrifice our fauna and environment for gain, we diminish our world.

Stitch by Samuel Tongue (published by the innovative Scottish press, Tapsalteerie) is a mirror which reflects back many of the issues facing our wee blue planet in 2019, and allows us to see further back to their roots in the expansionist policies of an Empire on which the sun eventually set. Its focus is mainly […]

WASHING HUGH MACDIARMID’S SOCKS Late at night, long after she has tucked his child in bed, lied to the ‘little scone’ he’ll see his daddy soon, she scribbles letters with a borrowed pen, a broken pencil stub. In the ghost-filled kitchen of her Cornwall birth she begs stamps from her scowling aunts, sends letters like […]