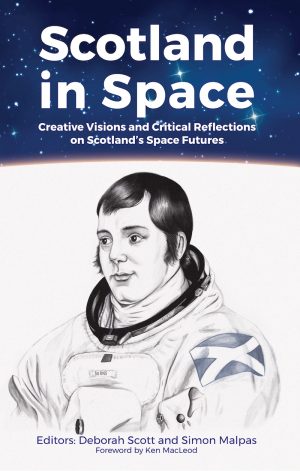 At the ASLS Annual Conference in May 2000, the topic was “Scottish Literature in the New Millennium”, and one of the papers delivered dealt with the genre of Science Fiction and how it might develop in the future decades. After surveying the current position and status of SF in Scotland, which was not encouraging, apart from the significant output and reputations of Iain M. Banks and Ken MacLeod, the paper outlined certain aims and possible initiatives that might advance the writing and appreciation of science fiction in Scotland. Twenty years have passed since then, and it is pleasing to report that some significant progress has been made, at least as regards two of the suggestions. There is now a secure and regularly-appearing Scottish magazine devoted to science fiction and to related speculative writing. Shoreline of Infinity, published and edited in Edinburgh by Noel Chidwick, which has notched up a healthy number of issues, winning widespread commendation and a British Fantasy Society Award. Furthermore, there is significant movement in the area of university research into science fiction. Based in Edinburgh, there is now a Social Dimensions of Outer Space research network of interested academics, as well as the Edinburgh Futures Institute. Thus there now exists the facility for an interdisciplinary approach to the study of Scotland’s relations with Space in terms of science, technology and the social sciences, moving beyond a purely literary impulse.

One of the first collaborative projects in this exciting new field has resulted in the book under review here. Scotland in Space is an attractively produced paperback, catching the imagination with a cover illustration showing the poet Robert Burns in a space-suit with the Scottish saltire on the shoulder as a symbol of a national space enterprise. Intriguingly, the book is subtitled Creative Visions and Critical Reflections on Scotland’s Space Futures. There is massive food for thought in these words, not least in the pluralisation of ‘Future’, and the first thoughts must be that the book can do no more than scratch the surface of a topic of such immensity, and that there must be continuing publication over a long period to justify the promise being made. Yet the book does not merely hint that more is to follow; the editors’ Introduction outlines the group method by which the book was conceived and written, bringing together both expert knowledge and analysis and imaginative creativity in the best traditions of the literary genre, which is here transcended and translated into another dimension.

Scotland in Space has a three-part structure, each section placing Scotland in a different Space context: Scotland and Mars, i.e., within the Solar System; Scotland and Proxima Centauri, i.e., the nearest star system beyond; and Scotland at the end of the universe. Each section is composed of a short SF story and two or three essays, one discussing the astrophysical facts and the other(s) exploring a specific issue raised by the story. The stories, each by an established practitioner of SF, vary in style but are all in a first-person mode. “Welcome to Planet Alba” is a straightforward narrative; “A Certain Reverence” employs the Star Trek convention of entries in a log of a voyage; and “Far” breaks the bounds of narrative with a poetic approach using imaginative unconventional page lay-out and type-faces and a wealth of colour illustrations. Since colour is also used to highlight section titles, and to provide each with a full-page figurative illustration and internal photographs, Scotland in Space has emerged as a book in which the devices of colour printing match the colours of the speculative imagination and the universe.

The editors, Deborah Scott and Simon Malpas, aided by Noel Chidwick, have sought to create a book which fuses the speculative and the technological, artistic creativity and scientific fact, philosophical discussion and blue-skies/deep-space thinking. This fusion works pretty well, partly because there is no attempt to inflate the small nation of Scotland into a major player in the space drive. In the three core fictions, the settings are, successively; a run-down visitor centre on the site of Scotland’s abortive space project, observing a virtual-reality Mars, while the main space effort is directed by China; an aliens’ cultural festival on Proxima Centauri, at which a Scottish artistic troupe performs traditional song and movement; and an Edinburgh scientific institute preparing a hyper-jump of Scotland as a whole across the universe to a new freedom, a concept that is more of a poetic political allegory than a credible piece of plotting. Indeed the thrust of the stories is inspired mainly by the current state of Scotland and humanity on Earth, a feature they share with the greatest stories of the genre. Equally, the accompanying essays display a sense that Scotland may have only a limited role in space development, involved in the area of ‘small space’, providing technological expertise in areas like robotics. Hopefully, future projects of the Futures Institute will be able to examine another fruitful possibility for Scottish involvement in Space, namely, an enlightenment kind of thinking derived from the Scottish intellectual and philosophical tradition, fuelled by first-hand observation and analysis of Scottish social and environmental issues.

We can hope that Scotland in Space is only a beginning of a much larger programme of research and publication. There are topics and ideas undealt with in this collection. For example, it seems that the developing political situation in Scotland will have to be considered in any artistic and scientific speculation about Scotland’s Futures (note the plural). In the past, there may have been an understandable, if not excusable, reluctance to approach the issue head-on, a wish to tiptoe around the matter. This cannot be long sustained. The front cover image of Robert Burns wearing a Scottish space-suit is making a positive visual statement that needs to be supported by words and ideas, by fact-based argument and clear-headed boldness.

Scotland in Space: Creative Visions and Critical Reflections on Scotland’s Space Futures is published by Shoreline of Infinity (2019).

Facing the Other, Reflecting on Ourselves: Michel Faber’s ‘The Book of Strange New Things’

‘I have been a stranger in a strange land’ (Exodus 2:22). These famous words are spoken by Moses, as rendered in the King James Bible, when explaining his choice of name, Gershom, for his son with Rebekah. Gershom means, roughly, ‘sojourner’, and is thus an apt commemoration of Moses’ famously ambiguous status in Egypt, a place […]

STATUE (i.m. Douglas Gifford) Every person deserves to have a statue. Not in the pompous poses waiting their turn to be torn down by future angry ages, but natural, relaxed, like Gaudí on his bench, or Cervantes with his book. A figure you would sit beside or share a sandwich with. One such I see, […]