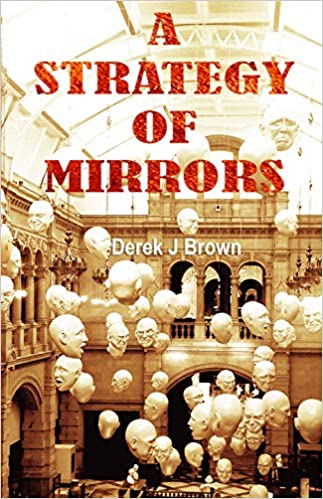 Part of what motivates the poetry of Derek J. Brown is concern with the impotence and ingenuity of humanity faced with a universe that our minds seem ill equipped, as yet, to fully grasp and understand. There is wonder at the things human beings can achieve and disconsolation at human stupidity and the limitations of our senses. Within this paradox (or dialectic) can be found other paradoxical conundrums, we may enjoy consumption while destroying ourselves: we see the surface of a vast array of phenomena yet do not fully comprehend them. Where does belief begin and fact end?

This is a highly impressive first collection of poems. It asks many important questions and explores them relentlessly through paradoxical iterations: such paradoxes range from those within details of the minutiae of daily social life, to the broad, the visionary and the universal.

A Poetics of Place and Time

The setting for much of the thought and action in these poems is Brown’s home city of Glasgow. Both the city’s centre and periphery are given equal attention and appreciation. Brown brings the same concentration and focus to all parts of the city that come under his scrutiny. There are no easy categorisations of social class or urban/urbane political certainties. People are observed in their places with the same sceptical reverence wherever they happen to be. The Glasgow encountered by the reader is both a real and recognisable twenty-first-century city and a mythical place: an allegorical backdrop for exploring such questions as:

Clearly these are big questions which may have no answers, or multiple answers, or, however unlikely, one true answer. Nevertheless, it is by looking at Glasgow (and the world) in this way that Brown constructs the poems of A Strategy of Mirrors. It is commonplace in Brown’s poetry to find the mythical, mystical and mysterious rubbing shoulders with café interiors, bar stools and someone smoking a cigarette outside a hospital entrance.

Underlying all of this is the feeling that Time, and its flow, is a matter of chance, of probability often so remote as to render events miraculous to the human senses. Perhaps all is serendipitous, all is random, or by way of counterpoint, perhaps all is fated under the master plan of an unknowable being (or God) and free will is not what it seems? Then again, possibly, there are junctures and hinges in history whereby in parallel realms all possibilities of every conscious decision are played out with different results: something along the lines of certain ideas advanced by Philip K. Dick. Whatever the case may be, it can be asserted with some certainty that for Brown, Time is a slipping thing, layered like Russian dolls.

It generates its algorithms

Despite this reader’s interpretation of Brown’s methodology, or poetics, Brown’s world view is emphatically that of a poet. The seeping of philosophy into the poetry is by virtue of attention to those fundamental poetic tools, language and language use. Language is an active lens, reflecting and refracting the light of meaning, which is in its turn ever evolving, being and becoming, negating certainty to find new ways of looking at our lives, presenting life as fresh and vibrant: even the dull and jaded is alive through deployment of notions of transience and paradox, which only just save Brown from jaundiced cynicism. While many a human being, including myself, like to think of humans as creative beings, as part of a complex and creative ecosystem, which exists in a creative universe, Brown gives us the metaphor of “The Glass Harmonica” hiding behind a curtain and if we strain our ears hard enough, or tune in properly, we can hear its call. Brown tells us:

There is no telling
what I misconceive
You call seductively

it generates its algorithm
like there was
no eternity

take this body
bruise it until it heals
Take your myths,
unite them in flesh

What soul is hidden in the music of the universe is reflected in Brown’s attention to syntax, cadence and rhythm. Brown’s poems have subtle but pointed rhythmic patterns imbued with the resonance of song. As in the famous Gillespie algorithm, ‘What happens is what is possible to happen, drawn from a random choice’ of variables available to Brown’s observational psyche.2 This same principle probably applies to all generational language creation though rather than go further down this road it might be beneficial to mention that Peter Clive has written an excellent short introduction to Brown’s collection which gives ease of access to the poetry itself.

As I strolled, fully possessed by twenty-first-century wonder, through Glasgow’s Alexandra park I overheard several groups of young people arguing amongst themselves over the question of ‘What is poetry?’ One young woman cried passionately into the Spring-like 1st of March sky that ‘Poetry is language as music’. Yet another declaimed ‘poetry is metaphor’. To which a very serious seagull answered, ‘All signifying-systems of representation are metaphors: mathematics, music, sculpture, painting, language written and spoken, but only language as sound is truly beautiful. Poetry and song are the greatest achievements of leaden-footed humanity, and I can fly, so fuck them.’

You know the kind of thing … happens every day. I was baffled by the fact that the Poetry Police weren’t on hand to keep order should anything go awry. In my day it would’ve been a swift boot up the arse… And I thought to myself, what we call metaphor is actually metaphor contained within metaphor. And home did I head to ponder. On pondering, the question arose as to what precisely are the algorithmic qualities of music? Surely modern synthetic sound production is algorithm dependent?

The magic thing is that human beings can perform such tasks of sound generation without ever having to know the first thing about algorithms, or whether the symbolic representation of sound is metaphor within metaphor. Our senses tell us. We know intuitively how to mimic the world – process our sense data. It is another of the great gifts nature bequeaths us and will continue to do so for as long as there is an eco-system on this planet, or anywhere else, of which we are a part. Brown’s poetry has a wonderful sense of music, of language as music, (and there are very few decent poems which are free from ‘language as music’). In Brown’s Strategy we find both formal and informal structures. There is close attention to the sound of the words, to the rhythm and cadence of the syllables, to line length, to stanza structure, though this does not come from counting the number of syllables and stresses in a line, but from the heart of Brown’s consciousness, from his familiarity with and feeling for music, for language as music, for poetry. It comes from something as vague as sensitivity or sentiment, yet is accurate, truthful and real. One such highly musical poem is,

On the verge of almost reliving
the day Gene Vincent came to Glasgow
I linger, smoking cigarettes
in the infirmary’s dominant shadow,
following randomly time’s deceits,
bait and switch of gods,
pulse of constants in my eye,
magnetic ends and odds

furnishing this vast aloneness,
the mystifying value
of a question that can’t be answered.
Is this not the way it always is?
In the myth that never was
all happenings that happen
happen simultaneously,
science of music whispers,

moonlight’s cold infractions
accumulate then zero in
on epiphanies yet to be had.
Sirius appears to dance
and with its vanities gesticulates,
every ghost is living
in this revision of revision,
this script of what passes for transience.

I fill a small yet incurable space,
same one Gene Vincent filled
back somewhere in the 20th Century
I watch lovers escape
into prisons of their visions
I am not immune, I escape into my own
Here in December’s mortal grip
I dream sounds from lucent guitars,

howls of infants born in bitterness.
words of drunkards, unseen sages,
everything subject to impulse
of thermodynamic conundrums.
It will soon be Christmas Eve,
seems the lights have burned for ages
and it feels like I was there
the day Gene Vincent came to Glasgow

There is music in its content and its cadence. The location is just outside Glasgow’s somewhat gothic Royal Infirmary, but this location is entangled with the thoughts occurring in the narrator’s consciousness, a consciousness that while located in one place (the narrator’s mind) is contemplating other times, places and ideas. There is also the location of the poem itself as ink on a page in a physical book: contained within its closed world which is “A Strategy of Mirrors”. It is winter and perhaps someone close to the narrator has just died or is seriously ill. We are “in December’s mortal grip”.

Thinking of how Time behaves in this poem is instructive. Time is not linear, Gene Vincent travels from the early 1960s into the narrator’s present consciousness, and the narrator simultaneously is transported to Vincent’s world of the 1960s: “time’s deceits … all happenings that happen/happen simultaneously … in this revision of revision,/this script of what passes for transience … and it feels like I was there/the day Gene Vincent came to Glasgow”. Even the natural world itself is not as it appears, it too contains various entanglements: “moonlight’s cold infractions … zero in on epiphanies yet to be had … Sirius appears to dance … and … every ghost is living”. The moon travels in Time and is not the actual moon observed but a future moon indicative of knowledge that can only be gained from future experience. There is the possibility that dancing Sirius brings our ghosts to life and somehow wraps all of time in an eternal present, in which past, present and future are united, it is all in the one-ness. A one-ness which exists to be transcended…

Needless to say, this a deeply thought-provoking collection. It is an entire world, and a worldview, contained within seventy or so poems. Each poem is executed skilfully and reads with entertainment and ease. There is a lot going on here, reflection upon reflection upon reflection. Reading A Strategy of Mirrors is a fascinating journey, by turns melodic, philosophical and abundantly rich with images.

A Strategy of Mirrors is published by Rymour Books, 2020.