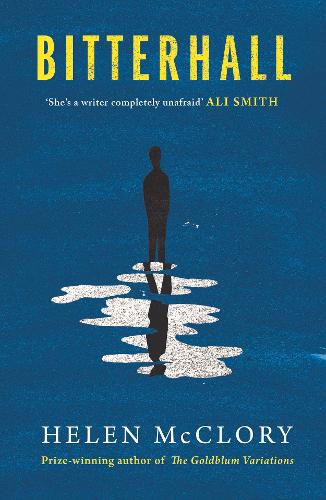 In an antique diary stolen from the home of a wealthy friend, Daniel Lightfoot discovers the fascinating life of James Lennoxlove. His diary is steeped in intrigue. Lennoxlove’s home, Bitterhall, appears on no maps; his surname is absent from any ancestry pages; his dates and descriptions clash and conflict. With all its confusion and inconsistency, the diary holds a strange power.

Daniel’s new flatmate, the beautiful Tom, is haunted by it. The book disappears into his room, before Tom himself seems to vanish too. Tom’s girlfriend, Órla, completes the trio as they confront the diary’s power, and navigate what it is to be haunted. Welcome to Bitterhall.

McClory’s talents for the eerie and unspoken shine in Bitterhall, her novel published by Birlinn in April 2021. Fans of her previous work will find McClory’s distinctive, darkly lyrical style once more, and those who have awaited a return to the novel form will find their patience rewarded.

McClory crafts distinct voices for each of her central characters, with all three sharing the narration in turns. All speak retrospectively, and in his first chapter, Daniel muses on the difficulty of selecting a tense to write in:

When exactly is this happening, and to whom is it happening, and who is making it happen? We begin to become tricky, don’t we, when I write in the first person. What tense do my intrusive thoughts manifest in? Somewhere between the first and second, like a harsh note in a piano recital, a piece so often played it should be clean of errors, yet here and here again the wrong note spikes in the same predictable, always jarring way, repeating itself, a bad inorganic refrain.

The slippery unreliability of these characters is part of Bitterhall’s charm. The story retraces itself from new angles, providing an appealing sense of tension and suspense.

Even beyond the lure of the diary, obsession asserts itself as a consistent theme. Órla clutches to a young relationship, Daniel is desperately attracted to Tom, and Órla and Daniel quickly develop an intense bond. The trio’s lives overlap and conflict, as McClory explores the twin dangers of possession and dispossession. Weirdly sexy, there is a real sense of longing and devotion that defines the novel, an intensity that is particularly alluring. As Órla herself describes the events of one Hallowe’en night, the plot is ‘deliciously murky’. With its thinning veil and Ouija board, this book is reliably spooky, yet, while McClory toys with ghost-story tropes, the story never strays into the hackneyed. With a convincing grounding in reality, this haunting feels entirely plausible.

This solid sense of reality is partly achieved through a commitment to depicting modern living. We see 3D printing technology, sad office lunches, and food service jobs that must be attended even in the midst of crisis. The precariousness of contemporary life is, after all, what leads Tom to join Daniel’s ‘eternal non-home’ of a rental house. Beyond being set in Edinburgh and featuring Daniel’s use of Scots vocabulary, the text is resolutely Scottish. There is a deep heritage of Scottish literary traditions exhumed and played with as McClory takes on the uncanny double, Tam Lin, and the mysterious manuscript, and plants them firmly in the modern world. The literary past is inescapable, in Daniel’s work replicating historic manuscripts, and in Órla’s thesis on medieval marginalia. Bitterhall is a book for booklovers, and Auld Reekie’s famous mingling of old and new provides a perfect backdrop for McClory to play, combining elements of both the magical and the mundane.

McClory’s details are, importantly, funny. From eating a flatmate’s labelled meal from the fridge, to a rescued cat named Mrs Boobs, a sense of play ensures Bitterhall is never dull or monotonous. This lightness, combined with short, enticing chapters and a compelling mystery, makes McClory’s novel infinitely readable.

Bitterhall revisits its scenes often as each narrator retraces and retells their perspective, yet McClory is unafraid of leaving some things left unsaid. There is something to chew on and return to in this dark gem of a novel. Pick up this book, and let it haunt you.

Bitterhall is published by Birlinn, 2021.

After her 2015 debut, On The Edges of Vision, which won the Saltire First Book of the Year award, and the novel Flesh of the Peach (2017), Mayhem & Death – a collection of flash fiction between one and three pages long – marks McClory’s return to the short form. The collection, boasting thirty-seven stories […]