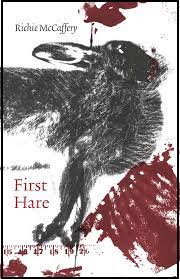 Richie McCaffery’s new pamphlet First Hare (Mariscat Press, 2020), with its beautiful and arresting cover illustration by Brent Millar, is another strong showcase of his signature style: tightly controlled, object-orientated poems and skilfully-crafted lyric vignettes that glitter with meaningful promise, always offering more as you hold them up to the light, turning them as you read.

The contents page gives the lie of the land ahead: poem titles range from Northumberland to Lebanon. And yet, it is not necessarily geographical space which is traversed in McCaffery’s work; his poems are often much more concerned with that other dimension, time, and its possibilities for imaginative journeys. The poem ‘No fellow-travellers’ emphasises exactly this. Out walking, the poem’s protagonist stops at a village graveyard and is struck by the idea that

The stones face each other
in rows like booth-style
compartments in old trains.

Most of these people lived half
a mile from here and now they
couldn’t be further away.

The poem goes on to insert the narrator into the conceit as an inspector “who has realised / all of his passengers are riding // with expired tickets […].” Taken as a whole, the piece is a satisfying combination of lyric attentiveness and the ability to mine an image for its meaning-making properties, something that McCaffery regularly practices to great effect. The poem on the facing page is another example: ‘Le Merle Blanc’ is a fountain pen that changes name as it travels from England to Belgium and back – blackbird to white blackbird – and serves as a potent symbol of migrant lives and political upheaval, and the vicissitudes of shifting national identities. The poet writes with the “beautiful flex” of its “gold beak of a nib” and one can feel the pen’s impress on the page.

Occasionally, however, an air of reflective melancholy can threaten to overtake a poem, with the attendant danger of blunting its tines; in ‘The fork’, a piece of cutlery becomes an object to assist in clearing dead leaves from a gutter, but also to muse on ‘promise’ not fulfilled, expectations left hanging. As time and memory collapse in on the speaker – the Georgians who made the fork, the deer “whittled to a hilt” – this can start to become a touch overwhelming, a concertina of events folded around the ‘I’. And yet, in other poems of a seemingly similar tone, there is an openness granted through love and respect: in ‘Falling’, a great grandfather falls, plummets, dives, and plunges through his own history and into the poet’s present, jerking him awake with a pleasant “sense of weightlessness, // of being unburdened”; the reader feels it in the nicely weighted measure and run of these lines.

These are poems of cul-de-sacs and living-rooms, antique shops and car boot sales. McCaffery is a magpie in seeking out and sifting the objects he finds to make the ordinary extraordinary: birth certificates, blunt saws, old police notebooks, framed Victorian prints, a Gibson J-45 guitar – all tumble from the pages of First Hare and McCaffery takes a real pleasure in crafting them into something novel. The poems are, on the whole, short, often no longer than three or four tercets or quatrains. They are precisely structured and this choice of form suggests each poem as a self-contained thought or image, often spinning on an ironic observation, like in ‘Exercise Bike’:

The best gift Mam’s got Dad
is the exercise bike. He’s on it
every day, cycling the distance
of the village to the city and back.

In a week he’s done hundreds
of miles still tethered
to the backroom. He keeps
himself fit by getting nowhere.

Ultimately, as with McCaffery’s previous collections, it is family and the mixed rattle-bag of inheritance that animates much of the work here: grandfathers, uncles, aunties, fathers, mothers, sisters, nephews, and partners all people these pages. Again, this ties in with an overriding sense that time is the space in which McCaffery works most, all of these characters becoming an extension of the emotional purview of the poet. With this in mind, many of the poems have a suggestion of being a ‘true’ story. This can be, on rare occasions, a mixed blessing when the poem is a little too tethered to the telling. One example of this is “poor old Pat, back and bladder gone, / thanks to all the bricks and beer” (‘Pat’). The poet clearly wants to offer some sort of record or balance to this figure’s demise but it stays close to reportage in the hope that the facts of the matter will conjure emotional heft. In the end, the poem is too light to register.

However, ‘Pat’ as a poem is an exception that proves the rule. The poem ‘Circadian rhythms’ is only a little longer but its simple word choice and slow unfolding sets up a scene that resonates beautifully. When “most diaries would have it blank, that day”, the reader is offered an insight into the value of the mundane, the seemingly quotidian that, in the context of the collection (or shared lives) taken as a whole, is a wonderous thing.

You cooked lunch, and I did dinner.
You spoke Flemish online with family.
I stuck to English on the phone with my mother.

The cat sat on each of our laps. We went
to bed together, both asleep within minutes.
It was one of the best days of my life.

The final poem ‘Cedar of Lebanon’ brings with it the realisation that we actually remain, as in many of the poems, in the multi-storied Northumberland; here, more precisely on the edges of the town of Wooler, on a pilgrimage to a “giant Lebanese cedar”. And time is again impinging on the present, less the ghosting of past lives and losses explored in many of McCaffery’s poems, but more the future that opens out from the cedar’s “huge prickly umbrella” where the couple gather

…cones hard as green grenades
that we take away to try to grow elsewhere,

to be thrown into the future and explode
in mushroom clouds of resinous canopies.

In First Hare, McCaffery’s carefully picks over multiple pasts in order to open up a future and there is much to glean from his work. As such, this pamphlet is a truly satisfying addition to his expanding oeuvre. I very much look forward to seeing where McCaffery chooses to go next, in both time and space.