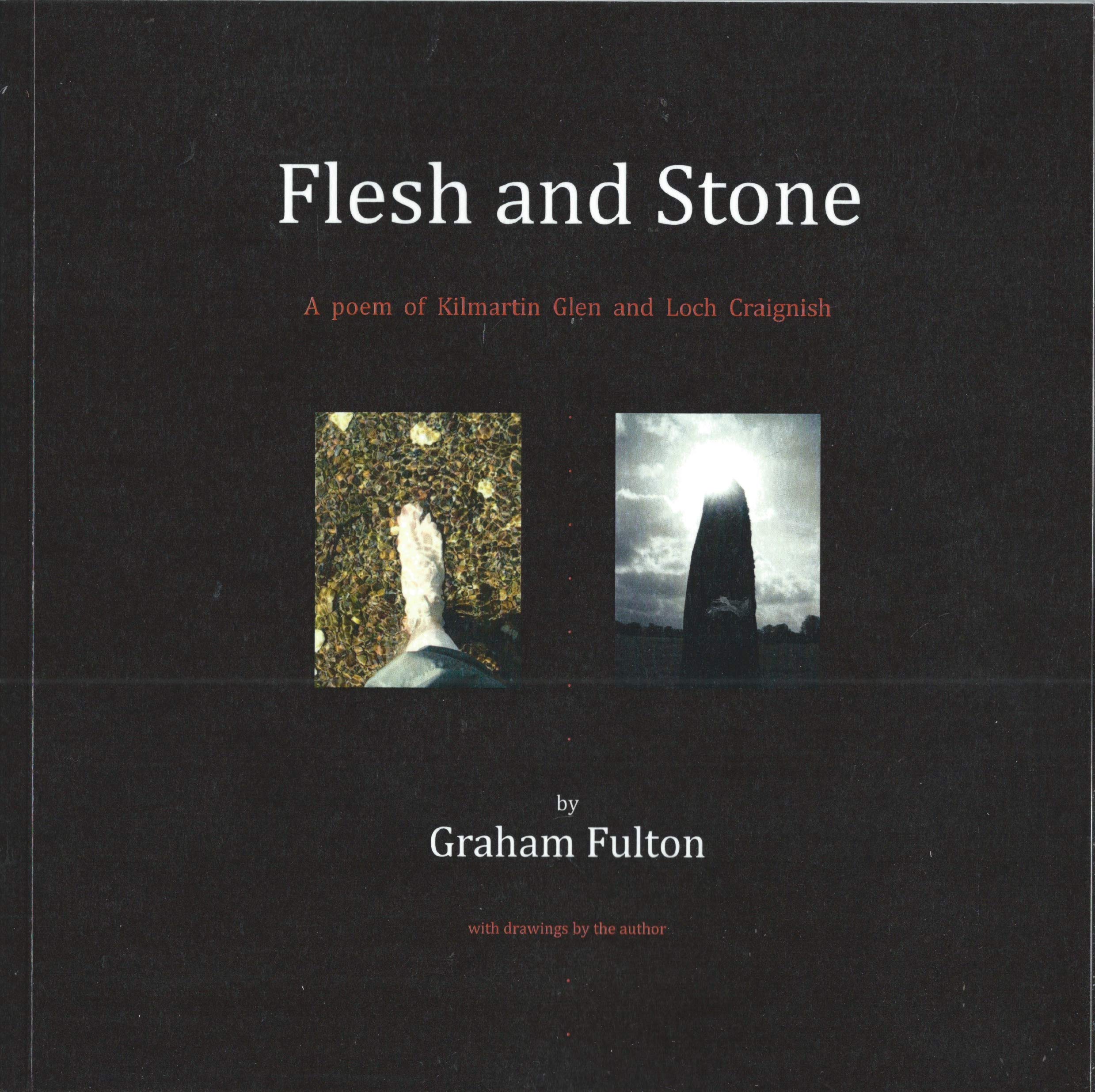 Flesh and Stone: A Poem of Kilmartin Glen and Loch Craignish is one of four books of poetry published by Graham Fulton in 2018 (my review of his Glitches of Mortality for The Bottle Imp can be found here). Unlike his other collections released that year, Flesh and Stone is a single, epic poem that comes in at around 4000 lines of free verse. Fulton’s poetry often responds to a specific place and its inhabitants. Here, we are not in the poet’s hometown of Paisley, but are taken on a journey that spans the ages to Kilmartin Glen and Loch Craignish, located on the Craignish peninsula on the west coast of Scotland. This spot in the heart of the ancient kingdom of Dalriada, with its standing stones, cup and ring marks, caves and churches, holds a special significance for Fulton, who first visited the area with his family as a child in 1960 and continues to return with his wife and family today. Published by Controlled Explosion Press (which Fulton runs in Paisley), Flesh and Stone brings together these ‘parallel voyages / through hill, rock, water, air’ in an attempt to locate – that is, to represent and imagine a specific place, and to attempt to locate oneself in this landscape, in time, in the Scottish nation, and in whatever it means when we say words like ‘flesh’, ‘blood’ and ‘humanity’. With Fulton, the reader is ‘moving into a past, / a people of the past’, but also ‘myself in my own past / preserved in compressed mush / around the Neolithic cairns / of Kilmartin Glen’.

The blurb of Flesh and Stone describes it as an illustrated poem. The book contains over thirty drawings of the landmarks and landscapes that feature in it, including the Standing Stone at Dunamuck, Eilean Mhic Chrion Island, and a sculptured stone in Kilmartin Chruchyard. These were produced by the author and are meticulously detailed in grey scale with a near photo-realistic finish. There are also several photographs in the book, taken by the author and Fergus and Jessie Fulton (the moon photographs belong to NASA). As well as drawings and photographs, Fulton uses typographic features to illustrate the text. For instance, the collection opens with an injury:

on a barbed wire fence

a globe of blood

fell on to the earth

Here, full stops are used to depict the drawing and dripping of blood. A red dot (the only use of colour in the book) marks the spot where the blood lands on the page. Elsewhere, the text resembles concrete poetry: a description of a whirlpool curls on the page (a metaphor for the opposing temporal currents at play); the words ‘leaning towers’ are aligned vertically at an angle to imitate the Nether Largie Standing Stones; later, the moss-obscured lettering on a churchyard tombstone is replicated in print:

ho was drowned at Lam sh

Other examples of found text are spliced through the poem, giving a layered meaning to the poet’s opening words ‘I cut’. These include dictionary definitions, road signs, a letter to Mrs. Fulton dated 1966, adverts in shop windows, phone numbers for taxi services, and encyclopedia-like entries describing the rocky landscape. These demonstrate Fulton’s preoccupation with ‘branches and fragments’, and  meanings and signification:

1. The soft substance in the body consisting of muscle and fat

2. the edible soft part of the fruit or vegetable

3. the physical aspects and needs to the body.

But dictionary definitions of words and concepts like ‘flesh’ and ‘blood’ don’t quite cut it, and the speaker strives throughout the text to discern what it means to ‘become a part of something / human’, or perhaps the question should be ‘somewhere / human’.

As much as the poem is a history of the self and the Kilmartin Glen, so too does it map the history of the Scottish nation, from ancient Gaelic kingdoms to the cheviot, the stag, and the black, black oil:

a deer standing among the coiled wire

From Arichonan     … We left in the ships

On the closest tide …

The moon is another central motif in the poem, and Fulton’s preoccupation with the cosmos speaks to a Morganesque belief in the universality of local experience (from Kimartin to Saturn). Fulton likes lists, and we read about everything that he sees, hears, and feels. By the end, it is as if the speaker is struggling to fit everything he is experiencing into the frame:

The gatherers, the hunters, the tourists,

the sailors, the buried, the farmers,

the drowned, the aligned, the misaligned,

the powerful, the weak,

the shopkeepers, the bed and breakfasts,

the tractor drivers, the drovers, the spacemen,

the dancers, the lovers, the players, the prayers,

the lobster men, the shepherds,

the season, the soil, the seasons.

This overwhelming passage comes at the end of the text as the author tries to capture and communicate everything that meets his consciousness, as if to try to hold on to everything at once. Like the moon and the seasons, the poem comes full circle, and closes with the same cut finger that opened the book. Flesh and Stone lacks the absurd and surreal humour that readers of Fulton’s past collections might have come to expect from Paisley’s most prolific contemporary poet. Instead, the strength of this important book lies in its intimate preoccupation with what it means to ‘become a part of something / human’ in the whirlpool of space, place and time.

Flesh and Stone is published by Controlled Explosion Press, 2018.