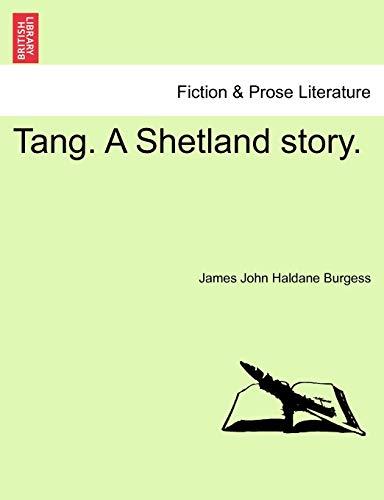 Northus Shetland Classics are performing a service long-needed, reproducing Shetland books at an affordable price and a fine format. I look forward to the future. Tang, a novel by J. J. Haldane Burgess (1862–1927) is a good start. Haldane Burgess, a brilliant man, lost his sight during his university years in Edinburgh. Returning home he became Shetland’s main literary figure and revered blind poet. He is forever associated with the Up Helly Aa festival that evolved in his lifetime, and his dialect poem “Scranna” remains a Shetland favourite. In this time of royal crisis, it might also be worth speaking up for his less-than-royalist poem about Queen Victoria – “Jubilee Ode”.

Tang isn’t a very satisfactory novel, although bits of it are. Published in 1898, it looks sometimes looks as though Haldane Burgess was playing to his Shetland audience. There’s Auld Ertie, the sly peasant, and his son “Yenkee”, lately returned from America with new but poorly integrated language. The poet of “Scranna” renders the language of guile and pretension well. No doubt there was many a guffaw at a Shetland fireside over that, and examples close to home were cited. “He cam back fae da States, wantin every bit o wit he ever hed” – I can hear it being said. This kind of thing is the source of many a staged Shetland sketch, then and since.

Dialogue bears the weight of conveying a lot, and perhaps it shouldn’t. The schoolmaster makes a speech to the laird about “Scotch greed” and oppression, and how the lairdly system created people like the slippery Auld Ertie. A huge kind of info-dump. It probably went down well with readers too. Post the Crofters Act, this kind of thing could be said. It is, though, very much “the author speaks”, and tell rather than show.

Then there’s the love story, as the object of desire Inga Bolt has to manage her suitors, and they try to manage with her. Inga, if the authorial description is anything to go by, is well suited to the male gaze. A lucky man that gets Inga, and perhaps a luckier one that misses her. There’s conflict and anguish, and other parties intervene, stirring it up. The young minister pursues her, and is well taken with a glimpse of fine limb via a telescope. One wonders about the life these young people lead, even for the era. They gather in the kirk, once for service, and toward the end to be worked to a fever-pitch by preachers.

So much takes place in visits to houses and shops. At those moments someone is often skulking around overhearing, peering, or surveilling. If King Lear could have benefitted from good legal advice, surely the characters in Tang could have benefitted from curtains. Admittedly it has often been a challenge to be private in Shetland society, but even so. The action does take place over a short time, but where is the social life of the young people? There’s a reference to what takes place as the youth of both sexes walk home from revival meetings, good at exciting the body as much as the spirit. Where are the rants, “da cairdins”, the melodeon and the fiddle, the sociability of Shetland. Perhaps the protagonists would have done better if they had been able to partner Inga in a weel-heuched Shetland reel.

Tang does gather together many of the issues of the Shetland of the late 1890s. I wonder if Haldane Burgess intended something bigger and more epic, but found only a small novel was feasible. It feels like there’s more than one work between the covers. A comic novel is one that comes through most clearly for this reader. It fits best with the business of overhearing and peering, Ertie and Yenkee’s nonsense, and the way Inga accumulates potential men. Haldane Burgess’ poem “Scranna” features a wise crofter fending off the overtures of the devil in disguise. In Tang, Magnus, something of a sceptic, fends off Howell, a visiting evangelist, with wit and humour. Howell isn’t a nice man, and exposes a metaphorical cloven hoof as he is packed off from Magnus with a speech by the schoolmaster.

The comic novel does make points, and has light as well as heat in the scene with Howell, and the episode ends on a quiet note as Howell’s gentler companion Meek evokes a more thoughtful view of the Christian universe. Then there’s the romantic novel, the novel of class conflict, and one about how frantic religion operates. Starting any number of novels is easy, ending only one is difficult, and that problem is apparent. There just isn’t space for all the components to fitted together, and in the end Haldane Burgess is “no a canny enough haund wi da lego”.

No two people ever see the same rainbow, everyone has a slightly different horizon. I’m sure the same applies to novels. A lot has changed since Tang’s publication date of 1898. Then, Shetlanders were probably just glad to see a book about hame, and much less concerned about how a novel goes together. Shetland dialect dialogue, and plenty of it – a good thing. The laird being told off – glory! A hero who was a herring-boat skipper – what better? It’s easy to imagine readers stimulated by what they read, and debating it as the book went from hand to hand, household to household. Subjects for discussion: religion versus the learning that came with the school system (then new), the gentry, the power of gossip and “ill-makkin”, and what exactly does excited evangelism achieve? There’s sometimes more to a novel than a story.

Tang: A Shetland Story is published by Northus Shetland Classics, 2021.

‘Shetland’ and the Intriguing Disappearance of the North-Boat

Let’s not talk about puffins, ponies, otters, orca or gansies for once, appealing though they may be. As I edit this piece, I’m turning a dod of glassy, green rock in my hand, a lump of oceanic mantle the size of a goose egg. Under the sea, the earth’s mantle wells up between spreading tectonic […]

Even the most ardent readers of nineteenth-century literature are unlikely to have heard of nineteenth-century novelist, poet, and satirist Jessie Kerr Lawson. Her writing, most of it published in periodicals, may strike twenty-first-century readers as alternately mawkish in its sentimentality and brutal in its humour. But her wildly improbable plots and boldly drawn caricatures are […]