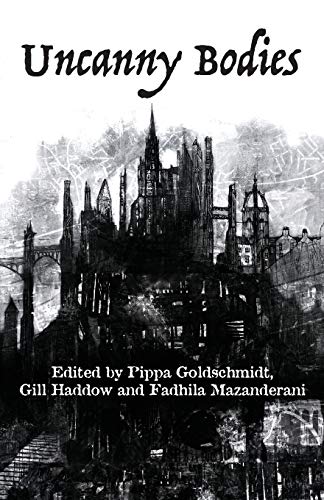 To anybody familiar with literary theory and psychoanalysis, reading this collection will offer a unique opportunity of experiencing the uncanny first-hand, enacting it as it appears, ghost-like, from each of the pages it haunts.

nicky melville’s ‘familiars’, a poem created by extracting all occurrences of the word ‘familiar’ in two translations of Freud’s 1919 essay on ‘The Uncanny’ and aptly placed at the threshold between the introduction and the main part, well captures the linguistic slipperiness at the core of the uncanny. But what the collection does differently from previous studies on the subject, including Nicholas Royle’s The Uncanny (2003), is to delve deeper into a particular – and underexplored – aspect of the uncanny: the body. As the editors remind us in the introduction, ‘many of the examples Freud draws on in attempting to describe and define the uncanny are related to human and non-human bodies’. These include the disquieting experience of ‘a dead, inanimate or mechanical object behaving as if alive’, and its opposite, ‘a live being behaving as if dead, inanimate or mechanical’, as well as ‘the sensation of a foreign body within one’s own, or an estrangement from one’s body’ (4).

The uncanny, we are reminded, is that feeling of being on edge, or even the troubling awareness that an edge exists, as a borderland, between what we feel more comfortable in keeping separate, impermeable, contained. The uncanny disrupts all of these comfort zones, exposing that liminal area, erasing the boundary, and reminding us that the body is in fact, permeable and not at all self-contained. The editors remind us of the iconic response to Roentgen’s x-ray of his wife’s hand: ‘I have seen my own death’ (4). What the spectral image of a skeletal hand drew attention to was the porous structure of the body, with skin acting as a permeable membrane giving the body an illusion of self-containment. The x-ray’s inside/outside erasure was uncanny because it made the familiar sight of her hand unfamiliar to her, and, in doing so, blurred the line between life and death.

The collection, which comprises critical/academic writing as well as creative responses in the form of poetry, fiction and drama, is organised around three broad thematic areas, ‘Pain, Illness and Healing’, ‘Situating Bodies: The City and the Forest’, and ‘Transforming Bodies into Other. Perhaps unsurprisingly, ‘medical’ bodies appear to haunt each of the sections forming a continuum that runs throughout the sections. ‘The experience of illness can turn our own bodies, once perceived as stable and reliable, the physical ‘home’ of the self, into something threatening’, the editors explain, adding that, even in its ‘healthy’ condition, ‘we’ are constituted by other species (such as bacteria) to function healthily’ (5). In other words, bodies are never self-contained, though specific experiences will make us more acutely aware of the permeable boundaries of our skin encasings. Pain, strokes, pregnancy, cancerous and benign growths, organ transplants and prosthetics pull the body apart, estranging it to the self, and, simultaneously, establishing new bonds with alien and techno bodies.

Bodies ‘out of synch’ in their own stories foreground many of the contributions in the collection. Referencing Freud’s study, Sarah Wasson’s piece, ‘Pain’s Uncanny’, defines pain as a narrative we are not in control of: ‘the strange, recursive temporality of pain experience can be uncanny’, she argues, ‘a return to a familiar state, experienced before, yet subtly different and strange even in the fact it is repeated, returned to, over and over – a repetition, a haunting, a curse’ (24). The uncanniness of pain reverberates in medical encounters, which highlight the inexpressibility of pain, and have the same ‘alienating and disorienting’ effect as the uncanny experience of pain on the sufferer (25). Wasson, who runs the Translating Chronic Pain project online anthology at Lancaster University, a project that has collected more than eighty entries from eight different countries, ultimate advises to embrace the strangeness of pain, as a validating experience. Dilys Rose’s flash fiction ‘Half Here, Half Where’ evokes the estrangement caused by a stroke. ‘You had become half girl (half old girl), half ghost, she writes (19), while observing the unnerving doubling of the stroke-induced body asymmetry: ‘The stronger, abler, go-to right side, with the larger, veinier and nimbler-fingered hand—you can’t begin to compute all the fine motor skills you will need that hand for—is numb, weightless, absent’ (20). The symptoms are described as a breakdown in communication, as the narrator asks, ‘what should the messages be and where are they—sequestered in a locked ward of the brain, until you locate, identify or recognise the key?’ (20), pointing to the ‘gap’ between self and body made apparent by the stroke. Jules Horne’s poignant experience of carrying a uterine growth at the same time as twins is translated in ‘The Stane Bairn’, where the common practice of a dialogue between an expectant mother and her unborn baby is replaced by the uncanny exchange between a woman and her fibroid tumour. Written in Border Scots, ‘the voice that lives deepest in my body’ (34), Horne’s ‘uncanny play, explores ‘how dialogue might be used as a way to help manage a foreign body, […] something unwanted and distressing. Something you can’t run away from, but carry around as part of you (33). Aoife S. McKenna’s response to Horne’s play further explores the silence surrounding the ghost narrative of miscarriage: ‘miscarriage is silenced and miscarried embryos rendered socially invisible’ (28). Occupying the in-between position between the untold stories of miscarried pregnancies and the grief-stricken accounts of still births is the inhuman’ conceptualisation of the foetus with abnormalities and consequent inhumane treatment of mother and baby.

While these experiences speak of absence, distance and loss, other responses to health conditions may bridge the gap between one body and another. In ‘Skin Sisters’ Bridget Bradley reflects on her meeting Liz Atkin, a fellow compulsive skin-picker, and an artist using her practice to manage her condition. She describes the feeling of ‘deep intimacy’, and ‘embodied understanding’, that emerges from ‘meeting a complete stranger whose experience mirrored my own so closely’ (62). Similarly, in ‘The Haunted House, or the Other in the Self’, Donna McCormack establishes a very productive comparison between a quintessential uncanny location, the haunted house, and the body which hosts a transplanted organ. While the assumption that ‘the body is spatialised as that which houses the self, […] suggests that it is a self-contained entity within which an individual being lives’, McCormack argues that ‘accounts of organ transplantation challenge this assumption of bodily individuality and singularity’ (114). Referencing the experiences of Jean Luc Nancy and Francisco Varela, this analysis proposes that the ‘post-death’ intimacy established between the living body hosting the transplanted organ of a deceased body not only challenges the life/death, self/other boundaries, but redefines the very grounds of the human condition: ‘the ghost – the very presence of otherness – is the foundation of selfhood for what we might call the human (in its multiplicity)’ (120).

Echoes of Burke and Hare and Jekyll and Hyde haunt other contributions such as Christine De Luca’s ‘A Bed of My Own’ – which resonates with the ghost revisiting her old student flat in Sarah Stewart’s poem ‘Revenant Visits Her Old Bedroom’ – and Shona Kerr’s ‘Uncan’, the latter written in response to Pippa Goldschmidt’s ‘Ma’. In the first, the intimacy established between the cadaver of a woman and Agnes, one of the medical students it is assigned to, has multiple uncanny repercussions. As Agnes’s dissection ‘books brought a whiff of the mortuary to our bedroom which hung around the bed’ (127), the ‘unfamiliar’ space of the morgue intrudes on the ‘familiar’ space of the shared home, while the same ‘cloying aroma’ obfuscates ‘the last drops of Bella’s cheap perfume’ (128). Spectral connections are established between Bella, the dead woman, and Annie, one of the older women lodging in the same house where Agnes and the narrator share a bed to economise. But as Bella creeps into Agnes’s dreams, Agnes’s touch on the narrator’s body leaves her ‘terrified she would call me Bella or start on the rest of my body’ (131). Significantly, the piece’s dual narrative makes room for Bella’s point of view, who throws light where there are only shadows – ‘They probably think we’re not quite real’ – with a voice characterised by a dark sense of humour – ‘probably can’t imagine a life like mine, or like one of the old men with their shrunken cheeks and turkey necks. At least my chin is still reasonably firm’ (131). In Pippa Goldschmidt’s ‘Ma’, the impact of the mother’s illness and death on the narrator has a disorientating effect, symbolised by the extra fingers, uncanny appendages to the knitted gloves, but especially by the experience of getting lost in the familiar city: ‘this city, normally as intricate as a knitting machine with its streets as precisely interlocked as the needles with the cogs, had gone wrong’ (145). As Kerr’s response, ‘Uncan’, astutely suggests, ‘The knitting machine’s ability to create body parts from wool can be taken as an analogy of the instructions in the genetic material, DNA’ (149).

Preceded by an evocative sequence of robot poems by Ruth Aylett, the uncanny affect of scientific knowledge and its applications is further explored by Vassilis Galanos, who draws a cultural map of the ‘Uncanny Valley’, ‘a metaphor in robotics, aesthetics, and psychology, to describe the relationship between humans and humanlike objects and behaviours’ (250). Taking Jentsch and Freud’s references to automata as its starting point, Galanos moves swiftly across the globe to collate the cultural history of the uncanny valley and tracing ‘the Anglo-Scots-German-Japanese uncanny-unheimlich-bukimi conceptual triple helix’ (252). The crux of the problem rests on the paradoxical effect of the increased similarity between human and non-human bodies: the closer the resemblance, the deeper the valley. Galanos, however, uses this investigation to turn the issue on its head, and attempt to redefine the horrifying hollow separating the human from the non-human body: ‘What if the Uncanny Valley’s U(almostV)-shaped trough, the frightening mental place most people strive to avoid, is the final u-topia (literally meaning non-place or groundlessness)?’, she asks, ‘What if losing the world under our feet equates unification with all other entities sharing the loss of this ground? (267), questions which echo a line for Aylett’s poem, ‘A woman meets a robot in a dream’, ‘Your whole isn’t human, let’s never forget’ (242).

While this is ‘a reminder of the universal arbitrariness of categories’ (268), Uncanny Bodies goes further than reiterating familiar discourses of languages. Combining visceral storytelling, perceptive analysis, haunting poetic and dramatic writing, the collection, which is highly recommended to all scholars working on the uncanny, as well as general readers who like being unsettled by what they read, produces an authentic uncanny experience, as many, if not all the texts, will resonate with familiar anxieties and hidden traumas. While the disquieting effect may stay within us for some time, as Sara Wasson intimates, the collection is also an invitation to bring the uncanny body out, and ‘show the shadows’ (27).