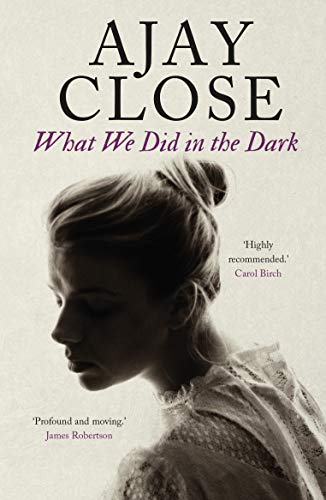 In a lively account of how she came to write What We Did in the Dark, Ajay Close reflects:

Doubtless some writers are extraordinary human beings living extraordinary lives, most are not. However fanatical I may feel about the work of certain writers, I don’t need to know who they slept with. As for novels about writers, I actively avoid them.

Conflicting drives emerge here: an anxiety about making fiction out of a writer’s personal life and the draw of Catherine Carswell as a subject. The figure of Carswell is particularly seductive. Her career as a writer and journalist, friendship with D.H. Lawrence (and loss of a long-established reviewing career with the Glasgow Herald after a generally positive review of The Rainbow in 1915), her controversial biography of Robert Burns (1930) and her connections with key characters in Glasgow aestheticism and later the Scottish Renaissance, all provide rich copy. A further intriguing aspect of her life is that so little is known about her first marriage to Herbert Jackson which ended with his incarceration in an asylum and a very public contestation of her appeal for divorce on the grounds of prior insanity. Carwell’s life has been extremely well researched by Jan Pilditch but even she has been confronted with the writer’s silence about that time. It is this marriage and brief period in Carswell’s life that provide the focus of Close’s compelling novel.

Close may have worried about her project but the final result is a triumph. Carswell’s letters have provided her with a sense of Catherine’s life but the richness of this novel suggests the more powerful influence of Carswell’s fiction, particularly Open the Door! (1920).  Much of Close’s own novel is set in Italy, during the unfortunate honeymoon of the couple, and beautifully embodies Carswell’s passion for that country, initiated by the Italian side of her own family and expressed in Open the Door! Critics have noted links between the imagery and symbolism of Carswell’s first novel and artworks of Margaret and Frances Macdonald, found in strongly visual passages such as: ‘There was life in the aisles of air between the trees, life in the dark plumes, life in the stark shafts, life amid the defiant roots. The sky palpitated from blue to violet, from violet to a still deeper blue […]’ (Open the Door!, p. 117). Close’s novel brilliantly conveys that visualised sense of spiritual intensity in Carswell’s writing but layers it with insights into female identity and the sexual self that were perhaps less easy to articulate in the 1920s. In a letter of 19 January 1905, Carswell wrote from her Italian honeymoon:  ‘All the olives are white before the wind and the cypresses on the edge of the hill are swinging backwards and forwards and the sun makes the whole hill gold against an inky sky – truly!’ Letters, p. 5.) In her depiction of that sojourn Close captures that emotional and sensual engagement with place but adds a darker motif:

In time the cloud hanging over the lake thins to a layer like a crocheted christening blanket, the sun keeking through its fine holes. They are burning leaves in the olive groves. When I remark that the smoke smells of caramelised sugar, you say I am such a greedy girl that everything smells of sweetmeats to me. (p. 79)

Close conveys the lush vibrancy of Carswell’s writing but also weaves into the narrative a consciousness that speaks to twenty-first century concerns. Her speculative imagining of a relationship with charismatic English Literature scholar, Professor Walter Raleigh, adds a new dimension to the narrative of a woman’s evolution into independence.  And while Carswell and Lawrence shared an interest in the power dynamics of passion, Close offers a fresh evaluation of the dynamics of dominance. She dissects with sensitivity the intersections of Herbert Jackson’s defined ‘insanity’ and its manifestation in what would now be termed coercive control.  The novel’s first-person narrator writes of her husband consistently as ‘you’, conveying an initial warmth but increasingly suggesting distance, despair and horror. As in Carswell’s second novel The Camomile (1922), Close uses letters to fragment the narrative, in this case imagined accounts from Herbert Jackson of his damaging experiences in the Boer War. The evocation of sympathy goes some way to explain but not justify the effect of their relationship on the young woman, who tells her husband: ‘for you, love meant crushing every shred of individuality in the other, eliminating every trace of the person you had fallen in love with’ (p. 205). In a powerfully dramatic account of the couple coming to the edge of a personal and physical precipice as they struggle across snowy wastes in the Italian Alps, Close conveys the complexity of Carswell’s emotional journey and the danger in which she is placed.

In her autobiography Lying Awake (1950) Carswell considered the difficulties for a woman writer of focusing on the personal while still arguing for the need to explore desire and relationships: ‘The woman, because she is a woman, must as an artist suppress what the man as artist or as a man is entitled to reveal.’ (Lying Awake, p. 123) Close’s novel breaks free from such anxieties, imagining and embracing the darkest aspects of this writer’s life and, more broadly, the nature of dangerous relationships. As Catherine tells her husband, ‘Before I met you, if not always happy, I had been hopeful and alive to the world. After, the world had shrunk to your dimension’ (p.206). D. H. Lawrence recognised Carswell as one of those people who had ‘the courage to live’ (Pilditch, p. 66). Close explores the painfully intense struggle to regain a life and the courage that required. Carswell’s titles, Open the Door! and The Camomile, suggest growth and freedom. What We Did in the Dark might imply the opposite. But in the drama created around these unspoken years, it too generates a beautifully written and glorious opening out, full of its own insights.

What We Did In The Dark is published by Sandstone Press, 2020.

Opening Doors: how I wrote What We Did in the Dark

For me, writing is a trade, like plumbing or joinery. Doubtless some writers are extraordinary human beings living extraordinary lives, most are not. However fanatical I may feel about the work of certain writers, I don’t need to know who they slept with. As for novels about writers, I actively avoid them. But, reader, I […]

Every few years Lorna Moon surfaces in the Scottish literary consciousness. This recurring ‘resurgence’ has been propelled either by the advocacy of critics such as Margery Palmer McCulloch, Carla Sassi and David Toulmin, who were fascinated by her work in terms of feminist, modernist, regionalist and nationalist interests, or through media projects inspired by her […]