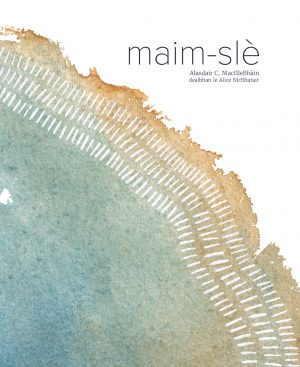 It is such a commonplace in Gaelic songs for the poets to praise the place that had raised them that the implied personification hadn’t struck me until MacIlleBhàin pointed it out. It encapsulates the nexus between land and people which is as old as Gaelic civilisation and which constitutes the basis of Gaelic myth. Land and people belong together, and nature is most definitely not the absence of people. It occurs in a song composed in 1896 by a man from Mull: he laments the loss of agri- and human culture resulting from the Clearances, and most poignantly of all, he laments the lack of anyone with whom he can share his sense of loss. The loss of indigenous population and concomitant productivity of the land is nothing new: it was noted by Donnchadh Bàn in his ‘Lament for the Misty Corrie’ in the eighteenth century and by James Hunter in his Making of the Crofting Community (1976). Ofelia García (Bilingual Education, 2007) noted of South America that biodiversity and multilingualism tend to go hand-in-hand.

This beautiful book takes the place of a theatre production which ran for only a week of its country-wide tour, cut short by lockdown in March 2020. In her foreword, Cathy MacDonald sees this as symbolic of the silencing of indigenous peoples throughout the world as neo-liberalism gives free rein to the stripping out of resources whatever the consequences. The material gain is short-lived while the haemorrhaging or maim of indigenous cultures is well-nigh impossible to undo.

The play was to handle the themes of colonisation and loss of language and habitat in a medley of voices quoting songs, placenames, statistics and commentaries. The territory is familiar from productions like The Cheviot, the Stag and the Black Black Oil but the current ecological crisis and the specificity of the material drawn from the author’s native Mull frame it in a profound and fresh way. The conversational nature of the dramatic monologues – or rather multilogues – is captured well on the page, their very fragmentary nature underlining the fragility of that culture.

It is a beautiful book, its colours those of land and sea, in a culture of beautiful books, one famously produced just off Mull in Iona. Each double page of integrated text and Alice NicBhatair’s artwork has the space to let the reader look around and experience something in their interaction. The artist’s lines evoke waves, contours, skylines and the geometric ploughing for commercial forestry, while the fraying and ripping of tweed suggests the state of the Gaelic culture. The designs of the Gaelic pages are not repeated where the texts are translated into English in the second half of the book. One page, however, remains untranslated, the Gaelic words appearing in a tear in the fabric as if to say they are untranslatable in another context. There is at least some beach to be seen in the design of the Gaelic poem spoken by the drowned goddess Clìodhna; but in the English version there is no sign of land, perhaps an indication that our modern civilisations have utterly lost any sense of a unifying principle in nature. If the goddess was drowned in myth through the carelessness of one man, how much more have we collectively drowned her today. The eighteenth-century Gaelic poet Uilleam Ros spoke on behalf of the land in a poem in which Blaven bemoans her lack of lord and people. In ‘mutation’ and ‘glen x’, MacIlleBhàin speaks of that relationship as brìodal binn, as a gentle loving union in which the land herself appeals to the population for help.

2021 marked one hundred years since the birth of Derek Thomson, another poet shaken by the demise of Gaelic culture in which he had experienced all that was secure and good in his formative years. In one of his poems ‘A chionn ’s gu bheil’ (‘Since the picture is broken’), he is tempted to reject its broken remains. But MacIlleBhàin says we do have the choice of participating in the culture; he does not portray the Gaels as victim. The compelling nature of his poetry is in the attention he gives to the detail of a culture he loves, to variations of songs, pronunciations or placenames, and in remembering the individuals who passed those details on. The downpour has all but drained the land of its goodness and the people of their identity but there may be just enough left of both to break up the monocultures of bracken and Sitka spruce, for, as he says, in variety there is life.