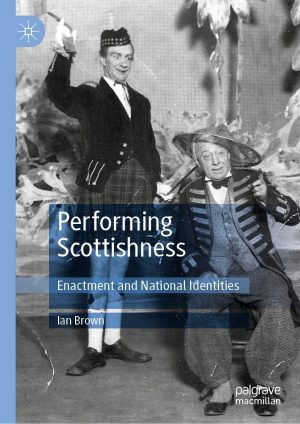 To define any version of any national identity simply as ‘false’ or, indeed, ‘authentic’, would require standards, even a single standard, of ‘truth’ against which that definition might be assessed. Yet, few versions of national identities, if any, have such clear standards.

This observation forms the intellectual heart of Ian Brown’s new book. He is deeply distrustful of narratives of ‘true’ Scottishness (or any other ‘ness’) as well he might be. However, I’d venture that at the perceptual heart of his re-consideration of Scots’ self-narratives of Scottishness as ‘performances’ is that aside from his distinguished academic and governmental careers working for, inter alia, the Arts Council of England and the British Council is the fact that Ian Brown is also a playwright of some note. This in turns means that an essentially dramaturgical paradigm for the understanding of history comes as second nature to him.

In the construction of a dramatic script, more even than in any other fictive act, it is not necessarily a useful or even possible exercise for a writer to attempt to come to conclusions about who a character, or a set of characters, might ‘really’ be. ‘Essence’ is not a useful or even a coherent concept for the dramatist, who is concerned with what a character says and does, and not with who they ‘really are’ as such. It is, of course, quite possible for the character or even the audience to come to their own conclusion as to the psychology of a fictional character like Hamlet, a historical figure like William Wallace, or even a contemporary actor in the theatre of politics like Vladimir Putin. But none of this, strictly speaking, is the business of a dramatist, whose sole concern is an external rendition of what any given actor says and does. That is, in how they ‘perform’ themselves. In dramaturgy, there is no hint that performance isn’t as near to essential truth as we’re ever going to get.

Brown brings this dramaturgical eye to a familiar sequence of ‘performed Scottishnesses’ from the myths of Alba (and their grounding as quotidian political narratives utilised in the nation-defining Wars of Independence) through the Declaration of Arbroath to the Scottish Enlightenment through Sir Walter Scott’s reinvention of Edinburgh as pageant and Harry Lauder’s kilt, stick and hoochmagandie to present-day manifestations of Scotland’s most recent cultural attempts to constitute itself through performances both on stage and screen and off. (It’s shite being Scottish, etc.)

There is nothing new about the proposal of a performative metaphor of nationhood: Brown himself and many others from George Orwell to Pankaj Mishra have written entertainingly and persuasively on British self-performance, for example as a colonial display for the benefit of the natives and a celebration-of-power show for those closer to home. (One need only think of the skirl of the pipes from Arabia to Malaysia, and not just at the Edinburgh Tattoo, to see that a performance of Scottishness has not always been benign in intention.)

What is daring in Brown’s own performance, I think, is that the ‘performance metaphor’ is seen not as concealing the truth of Scottishness (or Britishness, or indeed Scottishness-within-Britishness). Rather, given the strictures on the detection of truth, Brown argues throughout that the always-contested meanings of performance are all that can be reliably examined. This in no limiting sense of concealed vacuity, but in the thoroughly post-modern sense that metaphor, eventually, and the investment of performer and audience in that metaphor, is ultimately the nearest approach to ‘truth’ that we’re ever going to make.

In exactly the same spirit in which we argue that only that which is falsifiable may be thought of as scientifically defensible, only performance can legitimately be subject to historical (rather than mythic or poetic) scrutiny. An understanding of identity has no option but to concern itself exclusively with performance. The contested meanings of those performances – of which the tartan-clad British soldier in the Indian village is the exemplar – are where we must locate and frame historical debate. Essence is not the historian’s accessible business any more than it is that of the playwright. The play, to quote the English bard, is the thing …

In a drama, or in any dialogue scene between protagonists, we are not simply witnesses of verbal tennis. We are being asked to judge between contested versions of reality itself. The great thing about being the dramatist is that you don’t have to reach any conclusion about who is right or wrong, true or false. When the contested ground is one of identity, this strategic vision contains many equivalent advantages.

Having persuasively located the contemporary popular performance of Britishness to the ‘Nationalisation moment’ of the late 1940s, to be echoed in the performance of the opening ceremony of the 2012 Olympics, the key achievement of Brown’s lucid and erudite survey of familiar events seen through a self-consciously unfamiliar perspective is the emergence of a journey through a series of contested and, crucially, UNRESOLVED meanings of a Scottishness that is sometimes complementary to an inclusive narrative of Britishness and sometimes not. The historical strength of this sequence of accounts of strategic self-presentation from the dark ages to the covenanters and beyond is not that Professor Brown chooses unfamiliar topics of discussion, but that he identifies these succeeding performances (and their re-staging in the past and now in history and culture) for their contested, contradictory, argumentative nature. He locates each in a more or less connected series of disputes, arguing that there has NEVER been any such thing as a consensual idea of Scottishness, and that every manifestation from the long ago to the right now, has been one of argument and irony – not a settled will at all. Indeed, the meaning of these performances is presented as mercurial: the same play can mean different things to different audiences at different times and places.

When ‘Scottishness’ from the outset is conceived as something performed for specific audiences in reaction to specific circumstances (of invasion, of civil war and of participation in the wider British Empire, to name but three) and, further, has been designed for an audience capable of holding contrasting and even contradictory ideas at any time and place (as at the self-consciously ironic opening ceremony of the Commonwealth Games in the ‘year of contestation’ of 2014), then more is being achieved than simply presenting a metaphorical prism through which to view historical performances or events. The Declaration of Arbroath, for example, was already at the time of its composition couched in mythical as well as historicist terms. The document in its own specific space and time perhaps was a marker of ‘true’ and ‘essential’ Scottishness, but is reconceived by Professor Brown as a ‘performative Act of Scottishness’ with a specific political purpose at the moment of its composition: the message to the King of Scots that his position was conditional upon service to the sovereign people, whatever it means now, must be considered then and there as a political expedient to insist, primarily to the papacy, that attempts by England to subsume that kingdom religiously and politically would meet resistance that was not simply dependent on taking whoever happened to occupy the Scottish throne as a hostage to London (figuratively or actually); and that this insistence – that there was something to Scottishness that transcended political contingency – was itself a contingent and specific performance of Scottishness directed for a particular audience (the Balliol family and the Pope, among others) at a particular time and place. Its later interpretation as a founding declaration of national belief in the principle of popular sovereignty was, Brown points out, not even possible in the composers’ thoughts in 1320. But this is not at all to say that such post-French Revolution notions of popular sovereignty with regard to a fourteenth-century declaration are fraudulent – it is simply to characterise them, like the original composition of the document, as performances.

Each time an apparently unchanging ‘marker of true Scottishness’ has been used since has been a new production of an old play. ‘The people’ who are cited in a fourteenth-century document are not the same as ‘the people’ cited by 1792’s ‘Friends of the People’ or by the Claim of Right in 1989 or even the enfranchised electorate in September 2014. In each case, Brown argues and exemplifies, it is useful to consider with an appropriate degree of irony a sequence of performances by interested actors before distinct and ever-changing audiences.

It is in this context that Professor Brown goes so far as to attempt to redeem tartanry, from Walter Scott to Harry Lauder and beyond … as always having been ironic and self-aware, making a case, perhaps, that Scots are the inventors of the post-modern world as well as the modern one. Above all, Professor Brown seems to think we should be relaxed about it all, and sit back and enjoy it … and who is to say he’s wrong?

The recovery of memory is the historian’s business as much as the dramatist’s. Wearing both these hats at once, Brown argues event by event and performance by performance, a sense that Scotland exists as a continuity of self-performance right through the Wars of Independence to the religious sense of mission of the Reformation period and after to a performed ‘Scottishness within Britishness’ in the post-King’s Jaunt Victorian era, a performance in which our current royal family, no mean performers themselves, have played an active part. Throughout all this time, Scots have been the key audience for themselves. The Scots perform Scottishness here and now, as they have always done, from Burns Night in Kirkcudbright to See You Jimmy Hats at Twickenham, both within the Empire and outside it, above all to themselves and each other. The contested meanings of these performances are our perpetual argument with ourselves about who we might be. This book is a welcome and remarkably sane contribution to the discussion.