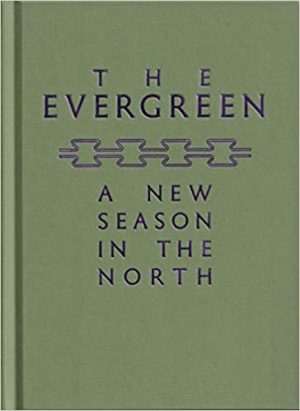 In the spring of 1895 Patrick Geddes and unnamed Colleagues, published the first of four issues of The Evergreen from Riddles Court in Edinburgh’s Lawnmarket. Their inspiration and title came from Allan Ramsay’s 1724 anthology, The Ever Green.

This issue ends The Evergreen’s latest reincarnation. Published by The Word Bank, the publishing arm of the Edinburgh Old Town Development Trust, this sequence of handsomely produced, hardback anthologies was inspired by the Geddes series.

Ramsay planned four volumes, but his project was never completed. Geddes made ‘no promise of perpetual life’ and this successor was conceived with inbuilt planned obsolescence, four issues only. There’s an energetic mix of poetry and short fiction, essays, travel, local history, reminiscence and illustrations from two dozen contributors, and it differs from the others insofar as the Editorial Board, Guest and Contributing Editors and contributors are all women.

In her Introduction Elizabeth Elliott offers this as ‘a long-awaited reply to George Bannatyne’ whose collection of poems and songs, completed in 1568, inspired Ramsay and the subsequent Evergreens. His handwritten manuscript is ‘a space where different currents of misogyny flow together.’

Suzy Rohmer counters Bannatyne with a single image: ‘On International Women’s Day in Logrono, the statues of illustrious men from history around a fountain in the city centre are usually adorned with aprons.’

‘Las Abuelas’ are the last generation of women who grew up under Franco, the grandmothers who were conscripted from birth,

women predestined to keep society going on a day-to-day and a birth-to-death basis while Franco organised his horrors … The level to which they were indoctrinated to put every family member’s needs before their own is truly astounding and still reverberates. Church, state and family instilled in these women an almost pathological duty to look after other people before themselves.

Little girls were mothers’ helpers, learning to cook, clean and sew, and, since reading was frivolous, most girls received little more than a basic education. Their job choices were limited. A wife could be expected to give up paid work as soon as she had children, perhaps work intermittently in different jobs to supplement the family income, then look after her own and her husband’s elderly parents.

And while these women carry on working the way they have always worked, ceaselessly caring, cooking and cleaning because their daughters now have full time jobs, Suzy Rohmer manages a generational nod in the direction of those who now quit the treadmill sooner: ‘This is not unlike the pointed display of Scottish women of the past, vying to ensure that their front step was cleaner than anyone else’s.’

Idealised Spanish mothers try to emulate their predecessors while working full time outside the home, but the model is buckling under societal changes and the collective voices of women demanding change, though other issues strive for attention. The pay gap, job insecurity, unemployment, pensions, femicide and domestic violence were highlighted in pre-pandemic strikes and events that were organised in two hundred places, including Madrid, Barcelona and Valencia. The abuelas’ work was also honoured, ‘though its true value may never be recognised until it has gone forever’.

Prose work, especially short fiction, was not well represented in previous anthologies, which is no criticism of some of the work that has appeared, rather a comment on where the other anthologies placed their emphasis, how they were balanced. But here the prose is mostly varied, energetic and often experimental, and the poetry still carries surprising images:

And in ‘The Grammar of Leaving’, Catherine Marshall treads a delicate balance between past, present and future, bringing a resolution more implied than stated till the extraordinary final stanza:

Most stories find women in society rather than dealing with issues of home and family life, though in ‘Zeno’s Paradox’ Judith Hertzog finds a wife and mother contrasting present reality with early assurances. ‘There was the promise that if we held on tight, we’d never again be lonely or afraid. But the longer we’re together, the more our selves get in the way of our togetherness.’

In Phoebe Weller’s story ‘The Grippe’, where most of the men are called variations of Thomas, a wine shopkeeper notices the local beggars, their habits, illusions and the perpetual absence of hope. They come into the shop to convert their begging change into notes. Like most of the work in this issue she finds interest in the ordinary, and even the mundane can be exciting.

Marie is a young woman who delights in bringing order to her community. In ‘The Bin Shed’ by Kylie Grant, she joins a litter pick, then arranges for the bin shed behind her tenement’s communal garden to be tidied.

Marie’s outrage comes from an early dislike of untidiness, but this is the south side of Glasgow and it’s not the only issue. She is partnered on her litter pick by a woman who wants to work alone because it’s the only time she gets to herself. She doesn’t say so, but Marie seems to have the opposite problem. The litter pick is communal. Marie would like it to be if not quite personal certainly more focussed and, at Tom and the nameless woman’s suggestion, she hires Stan who is small, rotund, bald and finishes the job while she sleeps upstairs.

Of course, there’s an ulterior motive. Previously, she walked out of a meeting with Tom, who has pink cheeks, tidy teeth and works for the council. She was explaining the tenement’s dire bin situation when he kissed her in the manky shed. Now she can’t help herself; she has to tidy her bin shed, before the wee man arrives.

I am giving nothing away by suggesting things turn out well for Marie. Birds are chattering when she wakes and by torchlight, with an angry neighbour watching, inspects the most immaculate bin shed she has ever seen: ‘The rain pelted down and the torch flickered. Marie stood there for some time in the dark, never having known a bin shed could be so painfully beautiful.’

Finally, writers as varied as Hemingway and Somerset Maugham used Chekhov’s stories as an inspiration and a springboard into their own work. Ellen Hair tries something different, she leaves Chekhov as he is, but changes the location.

In ‘Reading Chekhov in Sidi Ifni’ she revisits a fading, Art Deco hotel on the west coast of Morocco.

Street signs are in Arabic and French and streets go nowhere, but she is sure Chekhov would have identified with the provincial and melancholic languor, so it’s easy to transfer his story from Yalta to the Spanish Sahara.

‘Lady With a Dog’ is transposed: the unhappy banker and the young married woman can while away an afternoon in the cinema matinee. Anna and her Pomeranian walk down the grand esplanade and meet Dmitri at the beach.

The only problem is, should she change their names?

The Evergreen: A New Season in the North, vol IV, is published by the Word Bank.