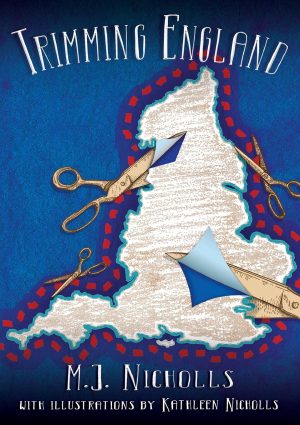 Most people have a favourite writer whose lack of wider recognition is baffling to them, someone who you makesuch a close connection with in terms of attitude, style and content that you can’t understand why others don’t seem to feel that way. For me, that is the case with M. J. Nicholls, a Scottish novelist who is published by American independent Sagging Meniscus, which seems apt for someone who has always seemed apart from Scotland’s writing community. He is an outsider in a number of ways, and I have a feeling that’s the way he likes it.

His latest novel is Trimming England. It follows on from 2019’s Scotland Before the Bomb, and with Condemned to Cymru promised in 2022 it seems Nicholls is addressing the state, and states, of the nation(s) as only he can. This time around he does so one county at a time, and one chapter at a time – each distinctly individual yet an important part of the whole.

The format allows Nicholls to give free reign to his seemingly endless ideas, and also to play with form and style on a chapter-by-chapter basis. It’s a book which could be read as a collection of short stories as each one stands alone not only in terms of who it concerns and where it is set, but in the way it is presented to readers. Nicholls plays with the text on the page, incorporating a wide range of styles and techniques to tell these stories. There are also accompanying illustrations by Kathleen Nicholls, and they give yet another dimension.

As far as the story goes – such as it is – the year is 2021, and British Prime Minister Frank Oakface has decided to incarcerate the most irritating citizen from each English county in Jersey’s infamous Hotel Diabolique. After the ‘Introduction’ (written by ‘M. J. Nicholls’ himself in 2023) gives the background to Prime Minister’s Oakface’s radical decision, we begin in the county of Bedfordshire where Tyrone Pouch (age twenty-seven) is sentenced to two years for the crime of ‘Abysmal Second Status’. Prospective writer Tyrone is found guilty of failing the test of social media and investing too much time, and lending far too much importance, to the amount of ‘Likes’ his posts receive. In chasing the affirmation of others any other writing is forgotten as he becomes consumed with virtual applause. Before he can right his ways he is whisked off to his fate.

Previous Nicholls’s novels, especially The House of Writers: A Novel and the 1002nd Book to Read Before You Die, were primarily concerned with all things literary and linguistic, and those obsessions are in evidence one again. Many of the guilty in Trimming England have writing related crimes, such as M. D. Thomas (eighty-two), found guilty of ‘Prolix Graffiti’, Thermos Gruber who receives a life sentence for ‘Not Writing His Whiny, Self-Pitying Novel’, seventy-five-year-old Elsie Rose and her crime of ‘Emails To Agents’, and, in Rutland, Yann Gravy is brought to trial for the crime of writing ‘Unrutlike Text’. But there are also plenty whose crimes are a commentary on other aspects of modern life, such as the terrible lengths parents may go to to make sure their children succeed, the ‘art’ of online trolling, the funding of the arts, the politics of food, and even public, or at least beachfront, indecency.

As well as commentating on writing and politics, Nicholls gives free reign to his other obsessions, packing more cultural references into one page than many writers would into a whole book. To take an example, page 115 mentions New York alternative rock band Blonde Redhead, the YMCA, the sitcom New Girl, Madeleine McCann, German thrash metal, H. P. Lovecraft’s fictional creature Cthulhu, Kylie Minogue, P. G. Wodehouse, and the Desborough Advanced Knitting Circle (some of which may, or may not, be fictional). That’s part of the joy of reading Trimming England, and all of Nicholls’s fiction – you can enjoy the glow of recognition when you get a reference, and Google others when you don’t.

And then there is the final chapter of ‘North Yorkshire’ where ‘You’ (thirty-four) are sentenced to twelve and a half years for the crime of ‘The Novel Inside You’. This is not only the longest chapter, but the one where Nicholls once again tries to get inside the idiosyncrasies and even absurdities of the writers’ life in what feels like a personal investigation. It’s a reminder that while he is never afraid to turn his eye to the lives of others, he saves his most searing observations for himself. Or at least someone who is awfully like him.

M. J. Nicholls is one of Scottish writing’s best-kept secrets, and it’s high time that situation changed. There’s no-one else writing today with his dry humour, wry eye, withering wit, and mastery of styles. With Trimming England, and Scotland Before the Bomb before it, he is turning his attention away, at least slightly, from the world of books towards more sociopolitical concerns, but with the same laser-focused disdain and world-weary wonder. It could just be he is the perfect writer for our extraordinary and incomprehensible times.

‘Close Your Eyes’ by Ewan Morrison

Ewan Morrison departed from the traditional novel to great effect with 2012’s Tales from The Mall, a hugely informative and entertaining read, but with Close Your Eyes he reminds us that he can tell a story with as much skill, wit and technique as any writer around today. His mastery of narrative, voice, place and […]