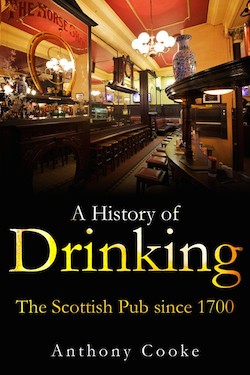 As the 2016 Scottish Court of Session deliberates over the current MUP (Minimum Unit Pricing) alcohol controversy, it is serendipitous and timely to take stock of Anthony Cooke’s 2015 omnibus study of just how and why Scotland’s government is once again at odds with the Drink Trade. Advocates for MUP, such as SHAAP (Scottish Health Action on Alcohol Problems), argue that the ‘price of alcohol matters because when the price of alcohol goes down, the consumption of alcohol goes up.’ Counter-arguments against MUP by, for example, David Frost, the Scottish Whisky Association’s Chief Executive, assert that the EU ‘court has confirmed that minimum unit pricing is a restriction on trade, and that it is illegal to choose MUP’.1 This tension between freer distribution of alcohol and more restrictive measures is described deftly with a panoramic vision in Cooke’s A History of Drinking: The Scottish Pub since 1700.

The trajectory of Cooke’s social history is expansive and, necessarily, interdisciplinary. Arguing that ‘[h]istorians have been slow to recognise the importance of Scottish drinking places in the social, economic and culture life of the country’ (p. 228), Cooke’s six chapters and three appendices survey the origins, growth, and obstacles of drink within a wide-rage of social spheres — such as taverns, inns, ale houses, dram shops, tipling houses, shebeens, licensed grocers, and hotels — from the early eighteenth century to the present. The historical arc of these chapters dovetails nicely with what can be viewed as traditional literary historical periods, e.g. the Eighteenth Century, Romantic Period, Victorian Era, Edwardian and Modernist periods, and our own Contemporary era. The value of such a structural template is that it allows Cooke to infuse and mash-in literary examples from such lauded Scottish authors as Robert Burns (of course), Walter Scott, James Hogg, Robert Louis Stevenson, James Kelman, Irvine Welsh, and Ian Rankin, thereby strengthening the implicit premise that drink thoroughly saturates Scottish culture.

Along with a generous hopping of Scottish literary figures and allusions, the backbone of this book emerges through marshalling meticulously researched evidence in the form of eight economic and trade-related tables, twenty-three enlightening and corroborating halftone illustrations, and myriad historical anecdotes, many of which were gleaned in-person. Initially this sort of evidentiary analysis might appear overwhelming to a casual reader. But Cooke’s ostensibly effortless writing style not only seamlessly infuses this preponderance of evidence, but he manages to entertain the reader while solidifying the facts. For example, during his discussion in chapter four (‘”People’s Palaces”: Urbanisation, Temperance and Responses, 1830-1914’), Cooke relates how in 1880 a one Thomas Wyness was appointed Chief Constable in Aberdeen and became known as ‘The Terror of the Trade’ when ‘[h]e cracked down on back-shop drinking in licensed grocers’ shops and insisted on the removal of compartments in pubs and the introduction of open counters’ (p.117). That sort of canny description allows us to imagine vividly the dimly lit quasi-covert drinking haunts of yesteryear that today’s pubs attempt to recapture in their dark wooden booths and hushed corners.

In fact, a central thread woven throughout Cooke’s study appears in this type of crackdown — of governmental restrictions, acts, licensing, and regulations that arose from a strengthening temperance movement, to which the current MUP controversy speaks. Yet rather than incorporate temperance evidence wholesale into his project, Cooke judiciously reminds us early on that ‘[m]ost of the material for the study of nineteenth‐ and early twentieth-century public house has to be viewed through the distorting lens of the teetotal movement, and the opposing drink-trade-related sources are often similarly biased’ (p.16). It is as if Cooke invites us to sit down with our favorite tipple and snacks to watch the ensuing match between Teetotalers vs. Drink Traders. On one side of this pitch the temperance movement has gained a fair amount of ground over the centuries (beginning formally in Greenock in 1829) with a whole host of not entirely successful enactments including various licensing schemes, designations of public-private consumption spheres, prohibitions against prostitution surrounding pub culture, and various restrictions against gambling on pugilism, horse racing, and professional football clubs. On the other side Drink Traders have managed over this historical trajectory to rescind, deflect and/or undermine Teetotalers’ advances through various competing measures including establishing unlicensed shebeens (typically frequented by recent Irish immigrants consuming illegally on-site distilled whisky, often laced with methylated spirits), promoting pubs as music and theatre venues, circumventing licensing laws whereby landlords or publicans became individual brewery licensees which differed radically from the large-scale English brewery licensing scheme, and the promotion of football club memorabilia and conversation, although football wagering remained illegal within pub culture.

To be sure, not all of Drink Traders’ effort should be viewed as nefarious. In more recent times, pub culture has been embraced by authors like William McIlvanney in Laidlaw (1977) wherein the eponymous character appears in an East End of Glasgow pub, by Ian Rankin in Resurrection Men (2002) in which Rebus ends up in Glasgow’s iconic Horseshoe Bar, or in Irvine Welsh’s Porno (2002) when Sick Boy returns to Leith and becomes (ironically) the landlord of the Port Sunshine pub. Scots love their authors almost as much as their drink, so this cultural marriage of libations and literature only confers benefits on Drink Traders and their keenly targeted customer base.

Another and perhaps more important thread throughout Cooke’s thorough and insightful research centers on the degree to which pub culture has — invoking Michel Foucault’s notions of institutionalized power structures — ‘challenged, rejected or ignored dominant culture norms such as thrift, self-denial, sexual repression and “respectable” behavior’ (p. 6). Given that this 315-year social history lays bare an innately Calvinist ethos promoting self-denial through varied forms of repression, we are served well when Cooke underscores that pubs continue to function ‘as a more “democratic” and less exclusive version of what Jurgen Habermas has characterised as “the bourgeois public sphere” where the literate urban bourgeois public [take] on a political role in the discussion and evaluation of contemporary affairs and state policy’ (p. 4). Nowhere is this dissolution of a Calvinist ethos on pub culture more apparent than in Cooke’s analysis of pubs forming a key locus for the LGBT community in the final chapter’s section ‘”Below the Radar”: Gay Pubs in Scotland’ (pp. 200-205). Whereas in the early twentieth century when homosexuality remained illegal and, thus, many centre-city pubs provided clandestine meeting places for non-heteronormative customers, Peter Irvine’s Scotland the Best travel guide now routinely lists the many LGBT-friendly pubs in cities like Edinburgh, Glasgow, Aberdeen, and Dundee. You’ve come along way, Bella Caledonia.

Cooke’s foundational work here will, I contend, prove to serve as a go-to manual of background, fact, motivation, and direction for both Teetotalers and Drink Traders for many years to come. Moreover, this labour of love will prove a touchstone for economists, anthropologists, historians, and other scholars within the growing field of Drink Studies. Aside from being thoroughly indexed, Cooke offers an archivist’s dream with a nearly-exhaustive bibliography of his sources and those for further research. The Court of Session could only benefit during its current MUP deliberations from analysing and imbibing all that Cooke offers here.

A History of Drinking: The Scottish Pub Since 1700 by Anthony Cooke is published by Edinburgh University Press, 2015.

‘Whisky, no doubt, is a devil; but why has this devil so many worshippers?’ — Lord Henry Cockburn, 6 April 18451 Beyond the kitsch culture of kilts lies Scotland’s last, enduring, and somewhat problematic fetish: Scotch whisky. This morning I would like to argue that through a turbulent history of illegal distillation, royal rehabilitation, and […]