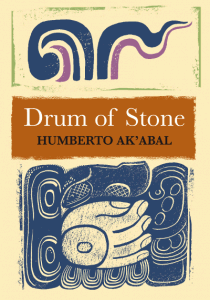 Humberto Ak’abal visited Scotland around this time last year, and the sounds of his maternal Mayak’iche’ language held listeners enthralled from Ullapool to Edinburgh. It’s rare that such an exotic guest should be accompanied by a book specially produced for the occasion. Congratulations are due to Kettillonia, publisher/translator James Robertson, and translator Rosemary Burnett, for their foresight, and for giving us texts we can continue to reflect on twelve months later, when the sound of Ak’abal’s voice has faded.

We know that dozens of languages are lost to the world each month, but since Mayak’iche’ is spoken by about a million people in the Highlands of Guatemala, it seems unlikely to disappear. The poet is very conscious, however, of its embattled status: ‘I don’t know what it is for,/ but even so, / I persist’.

Nigel Leask’s concise, immensely informative introduction places Ak’abal’s work in its linguistic and political context, within Guatemala’s history of sixteenth-century Spanish conquest down to the 36-year civil war that ended in 1996, almost unnoticed in the West. This is a multilingual nation, and Ak’abal accepts his bilingualism without resentment. Nevertheless, he acknowledges that ‘justice does not speak our language’, and in the long poem that closes this selection, he cries out against the injustice suffered by the indigenous peoples of Guatemala:

The selection is full of the sounds of nature, in Mayak’iche’ as well as English and Scots: of seasons, animals, vegetable life. Even the mute are heard:

Finding Drum of Stone on Kettillonia’s list of course suggests parallels in the use of home and official languages in Guatemala and in Scotland. Robertson, too, is bilingual: in this selection he writes only in Scots and Burnett in English. It’s not clear whether this exactly parallels Ak’abal’s use of Mayak’iche’ and Spanish, but it is a great advantage to the translators—and to the readers—to have this variety of registers at their disposal.

The Scots seems particularly suited to the down-to-earth rendition of family and village life: what Ak’abal describes in his introductory remarks as ‘a way of prolonging my mother’s voice within my own words’ (the literal mother tongue), or like the boy in one poem, feeling ‘his granny’s vyce / like a chap on the heid’.

It also, as Leask notes, gives the poems a concentrated immediacy akin to MacDiarmid’s early poems, as in ‘Whitewaash’:

The English version of the Mayak’iche’ original, while also composed of plain nouns and verbs, reduces the impact of that immediacy simply by sounding softer and smoother.

There are many levels of unfamiliarity here, but as good hosts do, the Kettillonia production has brought Humberto Ak’abal’s poetry right into our midst and given it—and us—the means to make that encounter mutually enriching.

Drum of Stone by Humberto Ak’abal is published by Kettillonia, 2010.

Since 1984, the Scottish Poetry Library has been in the heart of the Old Town in Edinburgh, an area rich in literary and publishing associations. At the top of the Royal Mile there is the Writers’ Museum, with its collections relating to Burns, Scott and Stevenson, and outside in Makars’ Court, memorial stones to Scottish […]